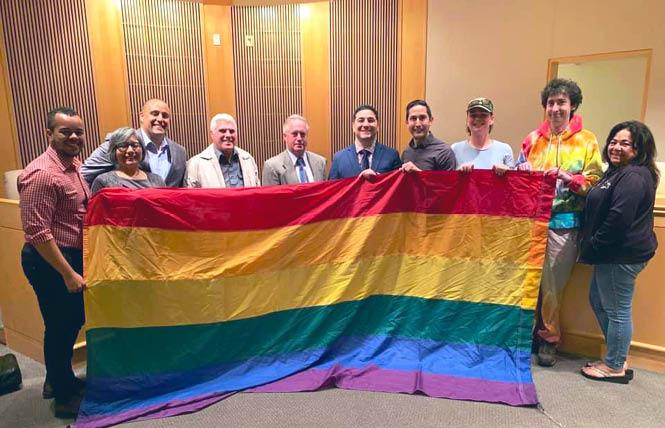 Members of the Lambda Democratic Club of Contra Costa County brought a Pride flag with them to a Pinole City Council meeting last year at which their request to see the East Bay city fly the LGBT symbol during June was approved. Photo: Courtesy the Lambda club.

With Pride parades throughout the state canceled or postponed this year due to the novel coronavirus outbreak, LGBT advocates contend it is even more important for local jurisdictions to mark June as Pride month by issuing proclamations and raising the rainbow flag in front of city halls and other municipal buildings.

LGBT leaders and allies in Contra Costa County are working to see every city in the East Bay jurisdiction to do just that this June. In 2019, the only cities in the county not to mark Pride month in anyway were Clayton and Danville. Tuesday night Clayton leaders voted to raise the Pride flag for the first time in their city's history, raising pressure on Danville to follow suit.

The Pride recognition campaign kicked off in March when members of the Lambda Democratic Club of Contra Costa County attended the annual conference for the county's mayors to request that they support the issuance of Pride proclamations from their city councils and raise the rainbow flag in their cities.

"Lambda went and let the mayors know we are asking all of you if you did it before to put up the Pride flag again and those who haven't to work with us to get them up. So they are aware this is coming," said Richmond resident Cesar Zepeda, a former Lambda club president who helped found the political group in 2017. "I was trying to read the room. You can definitely feel the ones who were, 'Oh, if I have to do it, I will but if I don't have to, I won't.' We have to put them under a spotlight and explain this is the right thing to do."

Tuesday night the Clayton City Council was the first to take up the issue at its meeting, held online via Zoom. The five-person council voted unanimously to issue a Pride proclamation when it next meets and to fly the Pride flag not only in front of its city hall but also in front of the town's library and a grove park during June.

"It is almost embarrassing for us to be one of the last two cities in the county not to celebrate Pride," said City Councilman Carl "CW" Wolfe, who had requested the city fly the flag this year along with City Councilwoman Tuija Catalano. "I think the time has finally come for Clayton to stand up to say we do support Pride month and we will fly the flag."

Catalano noted that a resident had asked her about doing so last year but it was too late in June for the city to act on the request.

"It is time we do this," she said, adding that it will send a statement that, "We want our city to be inclusive and supportive of every resident."

Devin Murphy, the recently elected new president of the Lambda political club, had beseeched the council to raise the Pride flag for the first time as a show of support for its LGBT residents, especially now with people having to shelter in place in their homes due to the health crisis.

"This is the work that is needed especially during this pandemic to make our citizens feel good and our cities feel welcoming during a lot of anxiety and hurt right now," said Murphy, who lives in Pinole. "Call it a virtual hug, if you will, but raising the flag is an opportunity to do that."

He told the Bay Area Reporter following the vote that he was excited to see the Clayton City Council make history with its decision.

"Nearly every city in Contra Costa County has made the move to send this strong message of inclusion and solidarity with LGBTQI communities," Murphy wrote in an emailed statement. "Make no mistake: this is about saving lives and making our communities feel welcomed. With LGBTQ+ youth suicide on the rise and the global COVID-19 pandemic impacting us all, this is a great way to build a sense of home and belonging to everyone."

Zepeda told the B.A.R. that the club was unable to make a formal request last year to the Clayton City Council to mark Pride month. Earlier this year a mother of a queer son who struggled with his sexual orientation as a resident of the city at the foot of Mt. Diablo reached out to Zepeda about asking the city to celebrate Pride month in June.

Dee Vieira told him her son attempted to take his own life because of the discrimination he faced and felt the city flying the rainbow flag would send a powerful message to LGBT youth and other Clayton residents.

"We like to work with local communities so it is not just outsiders coming in," said Zepeda. "She is a straight woman trying to make a change for her son and the kids of others."

The club then reached out to the council members, leading to the request in March that a Pride item be put on an upcoming council meeting agenda. Heading into the meeting it was unclear if a majority of the five-person Clayton council would support marking Pride month.

During the meeting, Vieira implored the council members that flying the flag "will save lives."

Another Clayton resident, Scott Denslow, also implored the council to fly the flag so it wasn't the only city in the county not to recognize Pride month.

"There are 19 cities in Contra Costa County and only two of us don't recognize Pride month in June," he said. "It troubles me a little bit we would choose to not be one of them."

It became clear the votes were there on the council to do so when City Councilman Jim Diaz said he had been contacted by a number of residents supportive of flying the flag and suggested doing so in front of City Hall. Both the city's vice mayor and mayor then voiced their support.

The unanimous vote by the Clayton council gave Murphy hope of seeing all of the county's other cities do the same in the coming weeks.

"As president of the Lambda Democratic Club, I look forward to seeing all municipalities decide to raise the Pride flag this June," he told the B.A.R. "While we may not have in-person Pride celebrations, we look forward to working with all cities, school districts, and local municipal boards in Contra Costa County to make this happen this June."

Added Zepeda, "Tonight the City Council voted to tell their community, especially their LGBT youth that, 'We see you, we support you, and we are here for you.' Tonight they voted to give their community hope for the future."

Zepeda said the club has contacted officials in Danville about the issue but have yet to get a response. The next city council expected to vote on the issue is San Pablo's, which in the last two years raised the rainbow flag.

It is expected to agree to do so again this year. But LGBT advocates are bracing for one of its Republican council members to push for also flying a flag honoring Christians like he had pushed for last year only to have it be rejected.

LGBT advocates expect all 13 cities that flew the Pride flag last year will do so again this June. In addition to San Pablo the cities were El Cerrito, Richmond, Pinole, Hercules, Martinez, Pleasant Hill, Walnut Creek, Lafayette, Orinda, Concord, Pittsburg, and Antioch. They would also like to see the four cities that only issued Pride proclamations last year - Brentwood, Oakley, San Ramon, and Moraga — to fly the rainbow flag this year.

In May, Zepeda will be asking his colleagues on the West County Wastewater District board, which he was appointed to last year, to also mark Pride in June.

And in the adjacent Alameda County, gay Dublin City Councilman Shawn Kumagai in early March asked his council to take up an item proclaiming June as LGBTQ Pride Month and to raise the rainbow flag during the month. He expects it will be taken up sometime in May.

Last year, his council's initial rejection of flying the Pride flag brought nationwide derision to the East Bay city, especially since the council members didn't interject when several public speakers addressing them at the meeting made homophobic comments. In the end, the city flew the flag after its mayor and another councilman changed their minds and agreed to support raising the Pride flag in addition to issuing its first proclamation in support of Pride.

Kumagai told the B.A.R. he is hopeful this year's vote will go much smoother.

"Well, this same council ended up unanimously approving it last year so I would expect the same result. But you never know!" he said.

While saddened by the cancellation of the Pride events this year, Kumagai said he understands the decision behind doing so.

"Just as in Dublin we decided to cancel our signature event, the St. Patrick's Day festival, we must put the health and safety of our communities first. But since pride festivals and parades are such an important outward expression of support for the LGBTQ community, it's more important than ever that jurisdictions do whatever they can to publicly communicate support," he told the B.A.R. "I'll also be asking that we go a step further this year to have a discussion about how we can improve as a city to better serve our LGBTQ community."