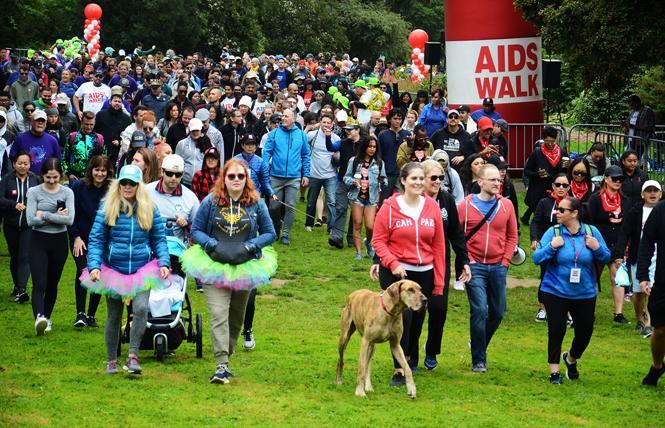 This year's San Francisco AIDS Walk is one of the latest outdoor events to move to a virtual-only format due to the physical distancing required to combat the novel coronavirus outbreak.

As the Bay Area Reporter previously reported, the 2020 AIDS Walk is scheduled for the middle of July and will be co-produced by PRC and MZA Events.

"We had an honest conversation about the problem of whether the COVID-19 situation would be different than it is right now and whether individuals would want to come together so soon after being in the midst of COVID-19 — gathering 10,000 people in Golden Gate Park on a Sunday would normally be good," Brett Andrews, a gay man who is CEO of PRC, said in a phone call with the B.A.R. April 21. "As a health and human services organization, keeping people safe is our priority."

"For what it will be, it will be an exciting, reimagined event," Andrews said.

Andrews said there will be other AIDS Walk online events, such as a nonprofit night (which has not yet been scheduled) as well as a kick-off night at 5 p.m. May 28.

That said, Andrews stressed that the AIDS Walk website will be working the same as usual — individuals and teams will be able to register and sponsors are encouraged to continue donations. Registration for the walk is free.

Typically, the AIDS Walk includes teams from businesses or nonprofits that participate and gather pledges from their friends, family, and co-workers. Last year's in-person event raised $1.5 million, slightly less than the year prior.

PRC, which helps vulnerable adults, including HIV-positive people, with a variety of things such as residential services and workforce advocacy, received $72,160 in grants from the 2019 AIDS Walk.

Ward 86 at Zuckerberg San Francisco General Hospital received $37,516 and the National AIDS Memorial Grove received $25,000, though it raised almost $100,000 from its own walkathon team.

Craig Miller, the founder of the AIDS Walk and head of MZA Events, said he hopes people continue to raise funds for the walk to help benefit HIV-positive people newly threatened by the novel coronavirus.

"For those who were part of the early response to the AIDS epidemic, the COVID-19 pandemic is at once unprecedented and strangely familiar," Miller stated in an April 22 news release, referring to the illness caused by the virus. "The funds raised through this event support thousands of San Francisco residents living with HIV/AIDS. This population is one that is also particularly susceptible to respiratory infections such as COVID-19, so we stand ready to support our friends and neighbors so directly imperiled by this health scare, as is our legacy."

The AIDS Walk isn't the first local charity walkathon to move to a virtual setting.

The March of Dimes' San Francisco March for Babies hopes to raise $300,000 in donations this year by having participants track their steps via a phone app. It has raised $110,792 as of the afternoon of April 21.

AIDS Walk New York was originally scheduled for May 17 and its primary beneficiary is Gay Men's Health Crisis. A statement on its website reads "this year's event will occur on Sunday, June 7 live and in living rooms throughout the Tri-state area and beyond."

AIDS Walk Los Angeles, the primary beneficiary of which is APLA Health, did not immediately respond to a request for comment.

There will be volunteer opportunities for the San Francisco walk, Andrews said, and directed anyone interested to email volunteeropportunities@aidswalk.net.