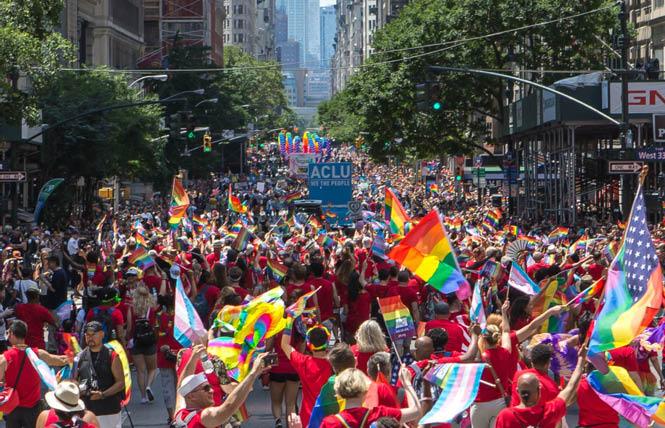 The LGBT Pride March in New York City was canceled April 20 — the latest in a series of Pride cancellations due to the novel coronavirus outbreak that within weeks killed over 40,000 Americans.

The cancellation of the New York event comes on its 50th anniversary. The New York City Pride parade, like its San Francisco sibling, is the annual celebration of the Stonewall uprising in Manhattan's Greenwich Village in June 1969 — the event that kicked off the modern LGBT rights movement in the United States.

As the Bay Area Reporter previously reported, the San Francisco Pride parade and festival was canceled April 14 due to a decision by the board of directors of the organization that puts on the event. Instead, there will be online Pride festivities and smaller in-person gatherings may be able to go forward by late June, according to Carolyn Wysinger, the president of the board of directors of the San Francisco LGBT Pride Celebration Committee.

Heritage of Pride, which hosts the annual march in New York, made its announcement shortly after Mayor Bill de Blasio said during a news conference that the city would not give any permits to nonessential events at least through June. New York Pride festivities were scheduled for June 14-28.

The city was "cooperating with" Heritage of Pride in its decision, which also led to the cancellation of festivals celebrating the Puerto Rican community and the state of Israel.

"This year is the 50th anniversary of the Pride parade and it's a very, very big deal," de Blasio said during the news conference. "That march is such an important part of the life of this city but this year in particular was going to be something that was a historic moment. We're going to miss all three of (the festivals) in June but they will be back."

David A. Correa, the interim executive director of Heritage of Pride, said in an April 20 news release that public health was the first consideration.

"Pride is a staple in New York City, and is oftentimes a safe space for many," Correa said. "This weighed on our members, board, and staff, knowing that we serve as a haven for vulnerable communities. It was not easy to arrive at the decision to cancel Pride as we have come to know it over the years, especially given the financial impact this could have on LGBTQIA+ people and businesses, but our top priority remains the health and well-being of all those that participate with us.

"We may not fill the streets of New York City this year, but LGBTQIA+ people carry pride with them all year long. I have no doubt that we will be together again soon," Correa added.

Alphonso David, a gay man who is the president of the national LGBT rights group Human Rights Campaign, used the cancellation as an opportunity to call attention to studies that indicate LGBT people may be at higher risk of both the medical and economic consequences of the coronavirus outbreak.

"It is disappointing — but ultimately, appropriate — to see many of these events canceled. As we see our way through the COVID-19 crisis, we cannot be too careful," David stated. "We know that LGBTQ people are at a greater risk of both the health and economic impacts of COVID-19, so we as a community must do all we can to stay safe and healthy.

"But, like we always do, the LGBTQ community will continue to find strength in our community — even if we have to do it virtually for now. The Human Rights Campaign will continue to work to help build digital community and programming to bring us all together in this difficult time," he continued.

Heritage of Pride threw its weight behind InterPride's online 24-hour Global Pride scheduled for Saturday, June 27. San Francisco Pride is also participating, as are Prides in many other cities.

The news from New York came days after the Bay Area Reporter noted that West Coast Pride parades in San Diego, Seattle, and elsewhere announced they were cancelling in-person events.

About one-quarter of reported COVID-19 deaths in the United States have been in New York City alone. There have been 134,436 confirmed cases there and 10,022 deaths in a population of about 8.3 million.