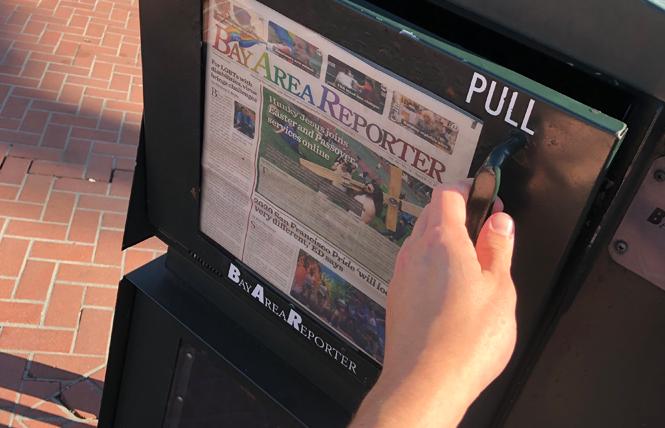 With local businesses shuttered, the Bay Area Reporter is mostly distributed in San Francisco news racks like this one in the Castro. Photo John Ferrannini

As the economy reels from the effects of the novel coronavirus outbreak, LGBT news organizations aren't just covering other companies facing closure — they are trying to stay in business themselves.

Michael Yamashita, the publisher of the Bay Area Reporter, said that he has had to launch an Indiegogo fundraising campaign, which he called "a sort of necessary and sort of desperate move."

"We were late to asking readers to support us financially," Yamashita said in an April 14 interview. "A lot of publications have been doing it a long time."

The move, announced in a publisher's letter April 2, came after the B.A.R. lost much of its advertising revenue due to coronavirus-related business closures. The B.A.R. had to lay off two longtime employees.

"We wanted to make sure we have enough funds to tide through this period because, like other publications, advertising dried up suddenly when businesses were forced to close," Yamashita said.

"We're surprised at what has been raised so far in just two weeks," he said. "Even if we don't meet our final goal, it's a boost of confidence and encouragement."

Yamashita said that he is applying for local and federal loan and grant programs. The paper hopes to get advertising from city agencies as well.

LGBT media outlets are important to ensuring that queer voices are heard in the broader culture, according to Yamashita.

"We have a special mission to cover our community and it's by us, for us, and about us," Yamashita said. "Nobody can recognize stories not told by the mainstream media like we can. That's true of LGBT people and it's true of all minorities. These stories fall through the cracks, don't get told, and people's lives are affected."

Yamashita said that an example of that is the prevalence of methamphetamine addiction in the LGBT community.

"One of the stories people don't like to talk about is meth in the community," Yamashita said. "But we report on the help that's being offered, what the government is doing, what agencies are doing. We help foster the discussion."

Yamashita said that sometimes the B.A.R.'s reporting has made people uncomfortable, but that the paper must think about what is best for the LGBT community at large.

"We try to improve community institutions like nonprofits and the business community," Yamashita said. "Sometimes it's hard to be a watchdog for your own."

Physical copies of the B.A.R. that used to be sent to now-shuttered bars and other queer spaces are now distributed via kiosks "in the neighborhoods," he said.

Other papers
The B.A.R. isn't the only legacy LGBT newspaper, of which there are 12, fundraising and seeking the small business assistance that local, state, and federal governments have made available.

The B.A.R. reached out to seven LGBT news organizations last week to see how the outbreak was affecting them. Five responded.

The refrain was similar: online traffic is up as people seek reliable information about how coronavirus is affecting their local LGBT communities, but the drop in print and online advertising has made the situation that much more precarious.

Mark Segal, who founded the Philadelphia Gay News in 1976 and is its publisher, said that he has been "applying for every possible grant offered that I know of," and has received a few.

His paper's advertising has decreased 80%, he said.

"Without people going to restaurants and shops, advertising dries up," Segal said.

Still, he is trying to identify coffee shops and other locations where people can pick up a copy of PGN "to-go."

"We have never missed a deadline and have no intention of doing so now," Segal said. "We will do what it takes."

The Windy City Times in Chicago is applying for grants.

"In addition, we have made a call for donations, and we are joining with the Chicago Independent Media Alliance for a 40-outlet fundraising campaign online in late April," Andrew Davis, the Times' executive editor, wrote in an April 9 email. "We have seen a dramatic loss in advertising revenue, so we are seeking any and all options to keep publishing in print and online."

Davis said that the Times has not had to lay off staff, and it is continuing its print edition but in a limited capacity.

Troy Masters, the publisher of the Los Angeles Blade, wrote that it is continuing with its print edition. (It is part of the media organization that owns the Washington Blade in D.C.)

"We are not unlike any business that relies on other businesses for revenue support. When one party's revenue streams stop it affects everyone in the chain. And when frontline recovery begins, it will take us a while to get back up to fully funded speed. But we will if we are mindful of the plight of others. We have to be of service and we have to believe that will be appreciated," Masters wrote April 8. "Traffic is up online, distribution is complicated by COVID-19 but we are doing it in new ways, and we have shifted some of our online reporting to be more inclusive of the general area community."

Masters wrote that he hasn't gotten the kind of governmental help from the city or county of Los Angeles "I had imagined we might get," but that he understands government entities are "directing a crisis response."

"West Hollywood has been very good to us," Masters wrote. "Our contributors are supportive of the paper and will be as long as they can be."

Masters declined to comment about if there were any layoffs because "that could change and is private."

Gay City News in New York City has had to temporarily cut its budget for freelancers, according to its founding editor in chief and associate publisher, Paul Schindler.

"Though all non-essential businesses in NYC have been shuttered since the third week of March, leading to a decline in local business advertising, we still have support from national pharmaceutical companies and several health-related local government agencies have been newly-advertising regarding the health crisis," Schindler said. "As well, (New York state) instituted a special Obamacare enrollment period and so some managed care companies have come in to advertise for that. Our staff remains in place, but we have cut out our freelancer budget for the time being."

The Washington Blade sent a March 25 email to subscribers stating that its "mission continues amid crisis."

"The Blade will publish in print as long as is feasible as well as online," the email stated.

The Blade Foundation is also fundraising, and had raised $6,430 as of April 14.

The B.A.R. was able to speak with Outword magazine in Sacramento after the print issue went to press. Outword publisher Fred Palmer stated the magazine is now online-only for the foreseeable future as many of the places people picked up a copy are now closed.

"We're getting ready to launch a fundraiser," Palmer said in a phone call with the B.A.R. April 16. "We've applied for payroll protections; we've lost a lot of revenue, although we've gotten some new advertisers who have different business needs during this time."

Palmer said that while restaurants have dropped advertising, health insurance companies and law firms have stepped up.

Outword has been in business for 25 years, Palmer said, and has moved its longtime monthly happy hour at Sacramento nightclub Badlands online.

The San Diego Gay and Lesbian News did not respond to requests for comment.

Updated, 4/16/20: This article was updated to include information from the publisher of Outword magazine in Sacramento.