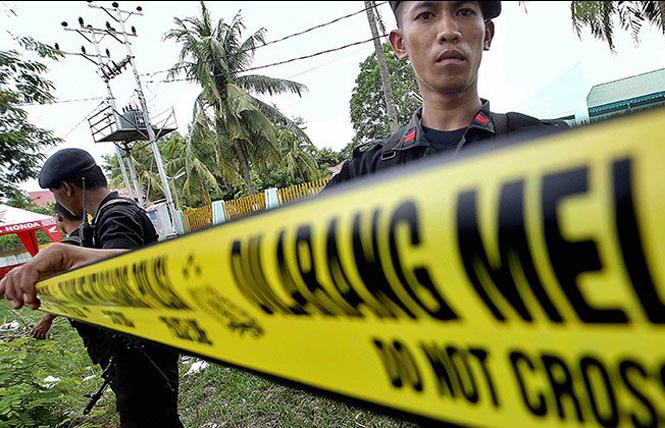 Human rights and LGBT advocates have condemned Indonesian police's reasoning for not charging alleged suspects in a brutal attack and burning that left a transgender woman dead.

Police arrested three of the six suspects, identified only as A.P., R.T. and A.H., April 8, the same day her death was reported by Indonesian media.

Police are considering charging the suspects with physical violence that carries a maximum sentence of 12 years in jail if convicted.

On April 4, the suspects allegedly beat and burned alive a 43-year-old transgender woman identified only as Mira. She died from her injuries shortly after the attack at Koja General Regional Hospital, the Post reported.

One of the suspects, a truck driver, parked his vehicle near the room Mira rented. The driver accused her of stealing his wallet and cellphone. He gathered some friends, who brutally beat her with a wooden log before pouring the gasoline over her and lighting her on fire, according to reports.

Neighbors who witnessed the attack attempted to stop it but were unsuccessful.

Amnesty International and Human Rights Watch, along with Indonesian and Australian LGBT advocates, are angry that the police aren't charging the suspects with murder and urged authorities to immediately investigate the murder.

"The police should have conducted a more robust investigation, instead of taking the suspects at their word," he said.

He urged the government of the world's most populous Muslim-majority country to protect its transgender citizens.

Transgender individuals in the country are called "waria," a combination of Indonesian words for "woman" and "man," noted the Thomson Reuters Foundation.

Homosexuality isn't illegal or regulated by law throughout Indonesia, with the exception of the Aceh province, where Sharia law bans same-sex relations.

However, the Indonesian government has increasingly cracked down on the country's LGBT community. Government officials have banned social gatherings and censored LGBT and mainstream media that produce queer stories. The police utilize pornography laws against gay people and there have been legislative attempts to criminalize homosexuality.

For more than a decade, transgender Indonesians have been able to legally undergo sex reassignment surgery and change their documents, but the process is ambiguous, according to OutRight Action International and Equaldex.

COVID-19: UNAIDS concerned about LGBT crackdown
The United Nations Programme on HIV/AIDS has expressed concern about countries cracking down on the LGBT community during the global novel coronavirus pandemic.

COVID-19, the respiratory illness caused by the coronavirus, has killed more than 123,000 people worldwide as of April 15, according to the World Health Organization. Globally, there are nearly 2 million cases.

She urged countries to limit emergency laws and powers "to a reasonable period of time" and to only renew those powers through "appropriate parliamentary and participatory processes."

During the past several weeks, Byanyima has received reports of countries targeting vulnerable populations, restricting public spaces, and increasing police powers, as well as introducing new laws that restrict rights and freedoms, she said in the statement. She was particularly concerned about people who are living with, or vulnerable to contracting, HIV during the pandemic.

"In times of crisis, emergency powers and agility are crucial; however, they cannot come at the cost of the rights of the most vulnerable," said Byanyima, calling "checks and balances" the "cornerstone of the rule of law."

"Experience from past and present epidemics shows clearly that an effective response to health crises such as COVID-19 must be deeply rooted in trust, human solidarity and unwavering respect for human rights," she added.

Byanyima pointed to Poland, Uganda, and Kenya as countries that are worrisome.

Poland fast-tracked passage of an amendment to increase penalties for HIV exposure, non-disclosure, and transmission. Individuals convicted under the law could receive up to six months to eight years in prison if convicted.

Authorities in Uganda arrested 23 LGBT people connected to a queer shelter providing services to the community. Of those arrested, 19 have been charged with a negligent act likely to spread infection or disease, UNAIDS stated. They are being held in prison without access to legal representation or medication.

In Kenya, Byanyima noted that a human rights-based epidemic response to the COVID-19 outbreak isn't being consistently followed by the government. Byanyima called for such an approach to be adopted in the COVID-19 response.

Hungary is also attempting to limit transgender rights. Legislators introduced a new bill to strike a law that grants transgender people the right to legally change their identity on official government documents during the pandemic.

UNAIDS pointed out its experience in the HIV epidemic shows that criminalization of virus transmission leads to significant human rights violations, undermines the response, and is not based on science.

In its statement, UNAIDS called on countries to repeal any laws put in place that are not for the legitimate aim of responding to or controlling the COVID-19 pandemic.

Alight, the parent organization to the Organization for Refuge, Asylum & Migration, is offering a fun way to provide life-saving assistance to nearly 800 LGBT refugees in Kenya this Sunday, April 19.

According to a news release, OutRight is providing LGBT organizations outside of North America and Europe with one-time general operating grants of between $2,500-$10,000 that will address issues facing LGBTIQ people that are exacerbated by COVID-19.

The fund aims to address issues such as access to basic needs (shelter, food, health care, and utilities), unemployment and poverty, domestic and family violence against LGBT people, and protection of human rights, safety, and security of LGBTIQ people in times of crisis, according to the organization's release.

OutRight announced the fund with an initial $100,000 disbursement.

Stern noted that during the pandemic LGBT people are cut off from safe spaces, such as community centers and events, "where we can be truly ourselves and safe," she said.

"It is OutRight's duty and privilege to step up and support LGBTIQ organizations serving their respective communities in this time of crisis and isolation," she continued.

The fund will also allow OutRight to document and respond to impacts of the crisis on LGBT communities, according to the organization's release.

OutRight also launched last week OutRight TV, a video and podcast series bringing to light stories of LGBTIQ people and allies from across the globe, and how they are coping in light of the growing COVID-19 pandemic.

OutRight TV features unedited informal conversations about the experiences, feelings, challenges, anxieties, coping mechanisms and hopes that LGBTIQ people and allies are experiencing at this time, according to the organization's April 6 release announcing the initiative's launch.

"I expect that we will hear unique and inspiring stories, as well as find common experiences and sources of solidarity as the world faces this global pandemic together," said Stern.

The fund was launched in collaboration with founding partners Calvin Klein Inc., Microsoft Corp. and the Dunn Family Charitable Foundation.

OutRight TV episodes are available on the organization's website.

In another effort, Alight and the Sisters of Perpetual Indulgence are partnering to provide life-saving assistance to nearly 800 LGBT refugees in Kenya.

A virtual fundraising event, Bitches Brunch: In bed with the Sisters, aims to raise $100,000.

Prior to the global pandemic, the queer refugee community in the East African country already faced protection gaps including poverty, malnutrition, insecure housing, homelessness and abuse, and violence. The public health crisis and the global shutdown due to the spread of COVID-19 has caused new challenges compounding an already dire situation, organizers said.

"Most do not have running water, soap, or sanitizer, and their cramped living conditions mean that social distancing is impossible. We are really against the clock to provide life-saving assistance to the community," Jamie Charnock, ORAM's global inclusivity adviser, wrote in an email to the Bay Area Reporter.

To find out what Alight and the Sisters are doing to help LGBT refugees in Kenya, follow them on Instagram @our_kitchen_table.

All proceeds will go to LGBT refugees in Kenya.