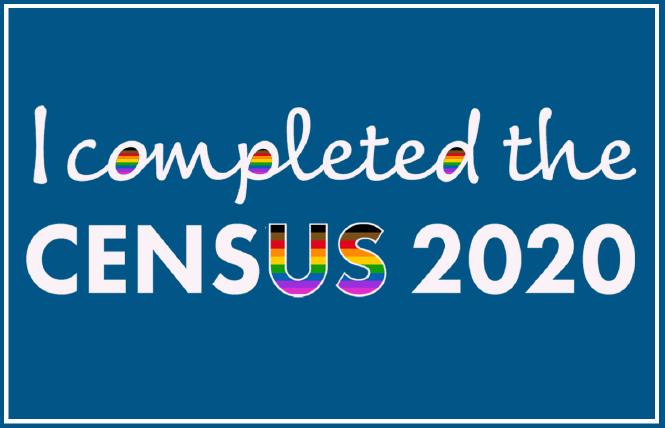 Despite the shelter-in-place orders instituted across California last month in an effort to stem the spread of the novel coronavirus upending plans to promote participation in the 2020 Census, the Golden State is near seeing half of its households fill out their census forms.

In fact, California's self-response rate mirrors that of the entire country. As of Friday, April 10, the Golden State was at 47.2% and the country was at 47.1%. With 7.1 million households in California already filling out the census, the Golden State was in 25th place in the response rankings for the 50 states based on a tracker being kept by the U.S. Census Bureau. Minnesota was in the top spot with a response rate of 56.6% of households.

In the coming days 64 million households across the nation will be receiving in the mail another paper questionnaire from the census bureau if they had yet to fill out the form. And this year, for the first time, households can take part in the census online via the website http://www.my2020census.gov or by calling 844-330-2020.

"It is now mid-April and that means the 2020 census is in high gear. Even with stay at home orders and other impacts of COVID-19, it is still possible — and important — for you to participate in the census while doing your part to keep the community safe," California Secretary of State Alex Padilla noted in an email sent Friday. "That's because for the first time in our history, we can respond to the census online or by phone."

Due to the health crisis the census bureau has pushed back the deadline for households to complete their census forms. Originally supposed to finish by July 31, the last day for the census is now August 14.

"I do want to encourage people to respond now. Don't wait until then," said Jeffrey Enos, the census bureau's deputy regional director for the Los Angeles region, in a phone interview Friday. "There will come a point later this spring or summer where we will be sending out our enumerators to complete the interview with people who didn't respond."

Enos told the B.A.R. that the state's response rate is tracking what he and his colleagues had expected to see at this stage in the count. Having people be able to fill out their forms online has coincidentally worked out extremely well in light of the health crisis, and Enos noted there have been no issues at all with the website.

"Given the challenges, I think it is in pretty good shape. We are close to getting 50%," he said. "We are still a long way off of the final goal of 100%. But we are right on track with our projections."

Wednesday, April 15, census workers were set to visit rural households that have yet to respond to drop off census forms, but it is likely those visits will be delayed in light of the stay-at-home orders in place. Enos stressed that census officials are taking guidance from federal and state health officials in determining when they will be able to send people door-to-door.

"Basically, let me just say first and foremost the health and safety of our employees and the public is a top priority for us," said Enos. "We will not send employees out into the public until we are cleared to do so. Having said that, the current date of April 15 is very tentative. As we know this whole situation is changing day to day; we are taking it day by day."

The agency already has moved its training online, Enos said, and will be instructing enumerators to remain six feet or farther away from people when they do go to households.

"Social distancing is built into our operations," he said.

As the Bay Area Reporter has previously reported, state and local leaders earlier this year launched outreach efforts aimed at getting as many Golden State residents as possible to fill out their census forms. Not only is their doing so important for California to receive billions of dollars in federal funding, also at risk is seeing the state's number of U.S. House seats be reduced.

New urgency
The push for people to take part in the decennial count of the nation's population has taken on new urgency amid the global health pandemic as the financial costs to cities and the state government mount by the day. With California under shelter-in-place orders through at least May 3, and likely longer, countless businesses are scrambling to obtain federal loans in order to remain open and millions of workers are signing up for unemployment benefits.

Federal resources will be key in helping provide relief for years to come, and how much California receives is determined by the census data. It impacts everything from the apportionment of congressional seats to the states to funding for social services like food stamps, medical care, and housing assistance. Many social service agencies that are grappling with how to continue to see clients right now rely on federal funds determined by the census count.

"Completing the census takes only about 10 minutes, but will help your community for the next 10 years! Our census participation determines California's representation in Congress and our number of Electoral College votes," wrote Padilla. "In addition, BILLIONS OF DOLLARS IN FEDERAL FUNDING are on the line too — funding for health services, our schools, affordable housing, and transportation."

Various counties across the state had planned to set up census kiosks in locations accessible to the public where people could fill out their census form online and receive help in doing so. But those plans had to be scrapped in light of the orders for people to remain home as much as possible.

Santa Clara County was one such jurisdiction, and its plans to promote the census had been used as a model by other counties. Nonetheless, it has still been able to get 57% of its households to turn in their census forms.

Its response rate puts it at 152nd place in terms of county rankings across the country. And it has the highest response rate of any county in California, the second best is San Mateo County with 56.2%, which puts it tied at 187th place with several other counties in the country. San Francisco is significantly trailing both counties and is below the state's overall standing, with a response rate of 45.1% as of Friday.

"All that work is paying off," David Campos, a gay man who is Santa Clara County's deputy county executive, told the B.A.R. in a phone interview this week.

Compared to San Francisco, "Our response rate is 10 points higher," noted Campos. "We are very proud of that."

And Santa Clara County was able to take top honors even while it was the first epicenter in California for cases of COVID-19, the respiratory illness caused by the virus, prompting it to issue the first strict stay-at-home orders early in March.

"We are proud even in the middle of that crisis we have a very high response rate, the highest in the state," said Campos.

Part of the reason for that, he said, is that the county quickly pivoted its census efforts last month to focus on reaching people via online platforms and by phone. It plans to continue to do so as it aims to get as close to a 100% response rate as it can achieve.

"We were going to do a very massive canvassing and on-the-ground strategy. We had contracts with dozens of groups in the county to do that," said Campos. "We pivoted and have our folks using social media and remote communication. We are going to continue to do that."

The 2020 census marks for the first that same-sex couples can clearly mark their relationship on the census. The forms include the options "same-sex husband/wife/spouse" or "same-sex unmarried partner."

It is a marked improvement from the 2010 census, when the options for explaining the relationship of a couple living in the same household were the generic terms "husband or wife" or "unmarried partner."

Despite the census forms falling short in terms of collecting SOGI data, LGBT leaders have been pushing to see the community take part. Groups like the San Francisco-based National Center for Lesbian Rights, for instance, are national LGBTQ organizational partners for the 2020 census.

NCLR spokesman Christopher R. Vasquez told the B.A.R. this week that the agency so far is pleased with how the efforts to "queer the census" are going.

"We have seen tremendous interest in our community in taking part in the census this year, both here in California and around the country, but we strongly encourage every LGBTQ household that receives their census survey to make sure they fully complete it," wrote Vasquez in response to the B.A.R.'s questions. "Our LGBTQ community — especially transgender individuals and persons of color — have historically been undercounted in past census surveys, so it is vital that we all do our part to be counted accurately in 2020."