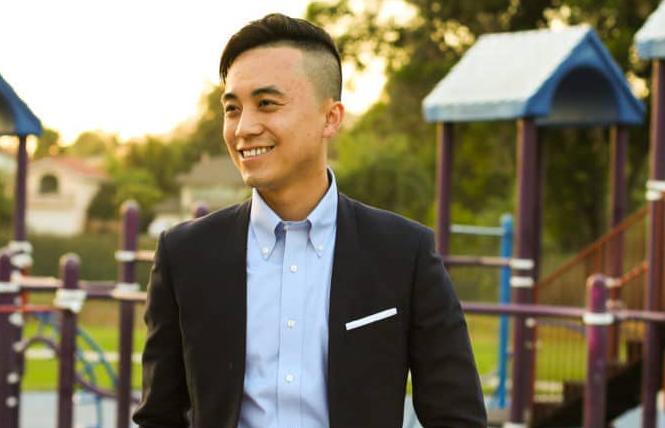 With the endorsement of Equality California this week, South Bay Assembly candidate Alex Lee is close to sweeping up support from all of the major LGBT political groups that endorse state legislative candidates.

EQCA had endorsed West Valley-Mission Community College Board of Trustees Anne Kepner ahead of the primary. But she failed to advance to the general election.

The statewide LGBT advocacy group informed the Bay Area Reporter over the weekend that its political action committee had endorsed Lee, who if elected in November would become the first out bisexual member of California's Legislature. As Lee turns 25 years old this summer, the Democratic legislative policy adviser would also be the youngest state lawmaker since 1938 if he wins.

"I am really happy to get EQCA's endorsement," Lee told the B.A.R. in a phone interview Monday from his home in San Jose, where he has been sheltering in place with family, friends, and his 3-year-old cat Soba, a mix breed tabby and Maine Coon feline he believes.

In a statement EQCA Executive Director Rick Zbur noted Lee was part of a new generation of LGBTQ+ leaders emerging in the Golden State.

"Today, we are proud to endorse openly LGBTQ+ champion Alex Lee, who will make history in November and pave the way for other LGBTQ+ young leaders to follow," stated Zbur.

EQCA also announced Tuesday (April 7) its endorsement of Democrat Josh Becker in the race for the open 15th Senate District seat after neither of the two Democratic women it had dual endorsed in the race, Sally Lieber and Shelly Masur, survived the primary. The district includes much of San Mateo County and the Peninsula, from South San Francisco to Mountain View on the bay and Pescadero on the coast.

Becker, a Menlo Park resident, is a straight ally who launched the Full Circle Fund that donates to Bay Area nonprofits. He was the first-place finisher in his primary race with 23.8% of the vote, according to the unofficial returns.

Becker is expected to easily defeat his Republican opponent, Alexander Glew, who survived the primary to advance to the runoff race in November with 17.3% of the vote. They are competing to succeed Senator Jerry Hill (D-San Mateo), who is termed out of office this year.

"I am honored to have Equality California's endorsement for my race in the November general election," stated Becker.

Zbur noted Becker "has proven he has what it takes to win and will be a critical ally in our fight for full, lived LGBTQ+ equality."

Lee was the top Democrat in the March 3 primary race for the open Assembly District 25 seat that includes parts of Alameda and Santa Clara counties. According to the unofficial returns, he landed in second place to advance to the runoff race in November with 15.4% of the vote.

He will face off against Republican Bob Brunton, who finished first in the primary with 20.8% of the vote, to succeed Assemblyman Kansen Chu (D-San Jose). With the eight Democratic candidates taking 79.2% of the primary vote, Lee is all but assured of winning the seat come the fall.

Due to the crowded Democratic field, the state Democratic Party did not endorse in the primary race and a number of political groups also stayed neutral, while most local politicians had backed Kepner as she was seen as having higher name recognition and raised more money for her campaign.

Lee did secure early support from GAPA, the Gay Asian Pacific Alliance, and was endorsed in the primary by the B.A.R. In the weeks since the primary election, the national LGBTQ Victory Fund and the Legislative LGBTQ Caucus, the affinity group for out California legislators, both endorsed Lee.

Lee is now in talks with BAYMEC, the Bay Area Municipal Elections Committee that works to elect LGBT candidates in four South Bay counties, about its endorsement. Like EQCA, it had endorsed Kepner in the primary.

"I certainly hope so," said Lee about having the support of BAYMEC.

While the group did not respond to a question from the B.A.R. about its endorsement process, Lee said he has emailed with its leadership and expects to hear a decision in May.

The California Asian Pacific Islander Legislative Caucus has also now endorsed Lee. While Chu is a member of the caucus, he has yet to individually endorse Lee in the runoff race. Lee has been in touch with the assemblyman in recent weeks but he did not ask for his endorsement considering the focus of the state's elected leaders right now is on combating the novel coronavirus outbreak.

Lee's campaign is in a state of semi-hibernation at the moment, as he has had to mothball his ground campaign that helped give him an edge in the primary race. He has also suspended for the time being seeking donations for his campaign account and will do so again when it is more appropriate, he told the B.A.R. in a phone interview Monday. According to the most recent information filed with the secretary of state, Lee had $4,620 in his campaign account as of February 15.

"We are in a strange pattern adopting to the realities right now," said Lee. "We are trying to figure out how to get our message out there."

He has been talking to elected officials and the Victory Fund for guidance on that front. For the foreseeable future Lee said he intends to focus more on phone-banking and digital means of communicating with voters.

"We are restructuring the campaign," said Lee. "We will do more digital and remote texting and phone-banking since we can't go out there and knock on doors as much as we would like."

According to his campaign, Lee is set to become the first state legislator from Generation Z, though others would consider him to be part of the millennial generation. (The dividing line between the two differs between 1995 and 1996, depending on which definition one uses.)

As the B.A.R. reported last month, Lee is also expected to help the LGBTQ caucus make historic gains come the November election following the outcomes of the state Assembly and Senate March 3 primary races. Currently at seven members, the caucus could see its membership climb to a record 10 lawmakers in December when the winners of the fall races are sworn into office.

"Definitely, it will be interesting to join the LGBTQ caucus. Depending on how the elections go, we might see it grow, so that is going to be exciting," said Lee. "Overall, I am very excited."

Even with the Democratic registration advantage he has in his Assembly district, Lee said this week he isn't resting on his laurels and plans to continue to campaign as much as possible ahead of the November 3 election.

"I am very encouraged by it, but I don't take any of it for granted," said Lee.