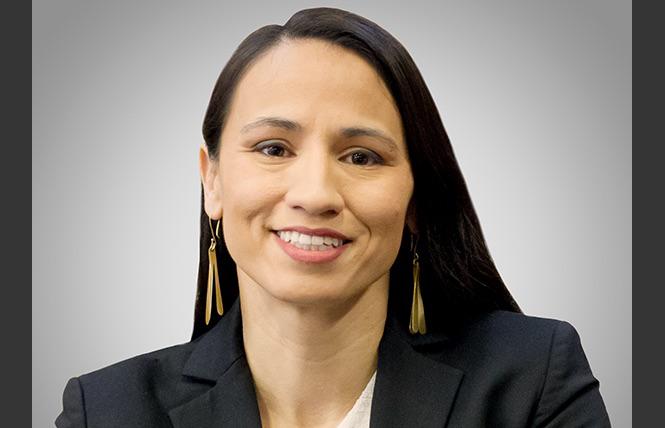 Congresswoman Sharice Davids (D-Kansas) made history in 2018 by becoming the first out member from Kansas and one of the first two Native American women elected to Congress. Photo: Courtesy Emily's List

The LGBTQ Victory Fund has retooled its Out To Win campaign to focus on individuals willing to be a candidate for an elected office in their community. It is a shift from last year when the national group asked people to nominate an LGBTQ person they thought would make a good politician.

"It doesn't mean you have to run. We are asking you to think about running," said Victory Fund President and CEO Annise Parker. "Not enough of us make that first mental step to say, 'Yeah, I can do this.'"

According to the Victory Fund, which helps train LGBTQ people to seek public office through its Victory Fund Institute and steers donations toward its endorsed candidates via its website, there are a known 854 LGBTQ elected officials currently serving across the United States. It keeps a running track of out officeholders on its website http://www.outforamerica.org

While 854 may sound like a lot, it accounts for just 0.17% of the total elected positions nationwide, noted Parker during a Facebook town hall the Victory Fund hosted Thursday, April 2, to promote its push to get people to sign a pledge to consider running for office on the website www.outtowin.org

"At a minimum we need to elect 22,529 more out elected officials to achieve equitable representation," said Parker, adding that among those people already serving in public office, "there are some losers out there. I know you can do better."

The Victory Fund celebrates National Out to Win Day on April 2 because it was the date in 1974 when Kathy Kozachencko, a lesbian seeking a city council seat in Ann Arbor City, Michigan, became the first openly LGBTQ candidate to win election in the U.S. And according to the national LGBT group, she is likely the first known LGBTQ elected leader in the world.

To provide encouragement to LGBTQ people to throw their hat into a campaign for office, the Victory Fund invited three trailblazing out political leaders to talk about why they made the decision to seek elected office. Joining Parker, a lesbian who first ran for office 22 years ago and became the first out mayor of a major American city when she was elected to lead Houston, were Congresswoman Sharice Davids, Maryland state Delegate Gabriel Acevero, and Fairfax County School Board Member Karl Frisch.

All spoke via Zoom from their homes across the country due to the shelter-in-place orders instituted to stop the spread of the novel coronavirus. Thus, at times Parker's voice was dropped and, in one moment of levity, she was drowned out by the sounds of a leaf-blower outside her home.

Another amusing moment came at the start when Frisch went live with a background that repeated his first name backwards. It took a minute for him to reverse it.

Davids, a lesbian who helped Democrats retake control of the House in 2018 by flipping her 3rd Congressional District blue, became the first out member from Kansas and one of the first two Native American women elected to Congress.

"I am excited to be here virtually with you all," said Davids, who several times lost her connection and had to join back into the online chat, joking at one point it was a shame no one heard an especially profound response she had to one question posited to her by Parker. "The Out To Win initiative is so important."

Out of the closet in her personal life due to the support of an accepting mother, family members, and friends, Davids was open about her sexual orientation during her race. And it wasn't until she announced her candidacy that she realized no Native American woman had ever served in Congress.

"People didn't realize here in Kansas a person with my background and from my demographic would get elected to Congress. I didn't shy away from it at all," she said. "I really think people want somebody who is authentic. They want someone to listen to them and wants to serve the community the best way they can."

Her main motivation for running was disaffection with the incumbent.

"At the end of the day the person representing our district I felt was doing a poor job of showing up in the community, connecting to folks, and listening to people," recalled Davids, adding, "At the end of the day I felt our community deserved a better representative. It is so important to have elected officials who can listen to and believe people."

Plus, no one she had beseeched to run against now former Representative Kevin Yoder (R) would.

"I was asking other women to get into the race and for somebody to step up. Then I realized if I am asking people to do this, maybe I should consider being part of the solution myself," said Davids.

Acevero's election in 2018 to his 39th House District seat made him the first queer Afro-Latinx member of Maryland's Legislature. He is also an immigrant, having grown up in Trinidad.

"The fundamental question any candidate should be asking themselves is not why are you running but what have you done in the community you want to represent," said Acevero, who was a local activist and community organizer on LGBT causes and other issues prior to seeking office.

He saw serving in his Statehouse as an extension of that work. Plus, he knew by being in office he could serve as a role model for youth with similar backgrounds as his own.

"It was also an opportunity for me to run for office and, in essence, be that candidate I know a lot of people who would like to see running for office," said Acevero. "Being Afro-Latinx, an immigrant, and queer, that is not seen in our politics."

He recalled meeting a voter while knocking on doors who told him he didn't support same-sex marriage but nonetheless was going to vote for him because he had already learned about Acevero and was impressed with his honesty about his sexual orientation.

Frisch, a gay man who spoke to the B.A.R. in February 2019 while attending one of the LGBTQ Victory Institute's trainings for candidates it held that winter in San Francisco, went on to be elected in November as the first out officeholder in his Virginia county that is part of the Washington, D.C. metro area.

"We have all learned a lot from our campaigns," said Frisch, a native of Los Angeles County who in 2002 worked for the Democratic Party of California as a deputy communications director and worked on various candidates' campaigns. "I am happy to share that info with anybody looking to the future to take the step and do this for themselves."

Having a spouse who is a teacher and was supportive of his becoming a candidate, seeing how LGBT school issues had drawn controversy in his county, and being a board member for the Victory Fund all helped Frisch decide to seek his school board seat.

"I knew I could do some good on those issues simply by having a seat at the table," he said.

His opponent was a woman who espoused anti-trans and anti-LGBT positions, so he had no choice when it came to talking about LGBT issues or his sexual orientation during their race, Frisch noted. He turned a homophobic voicemail he received into a successful pitch for campaign donations.

"I know in suburban America there are largely middle-class, educated white women who look at candidates that are not pro-LGBT with suspicion. They question their values," said Frisch. "Being able to show I was comfortable in my own skin and my opponent was out of step with where they are was very helpful."

"If not you, then who?" asked Parker.

In an earlier interview with the B.A.R., Parker noted that as of February this year there were already more LGBTQ people seeking office in 2020 than the 720 known out candidates who ran in 2018. As of March 24 the Victory Fund had endorsed 186 candidates, and Parker expects that number to surpass 300 candidates across the country this year.

This Sunday, April 5, the Victory Fund will again promote its Out To Win drive and other work via a Sunday Social it is hosting on Facebook Live. Emcee gay Pennsylvania state Representative Brian Sims (D) will kickoff the event by making his favorite brunch cocktail. Then Parker and lesbian Senator Tammy Baldwin (D-Wisconsin) will talk about life under quarantine and how LGBTQ candidates and elected officials are responding in these unprecedented times.

The event will be held at 9 a.m. Pacific Time via www.facebook.com/victoryfund

It is free for people to participate, though donations are encouraged.