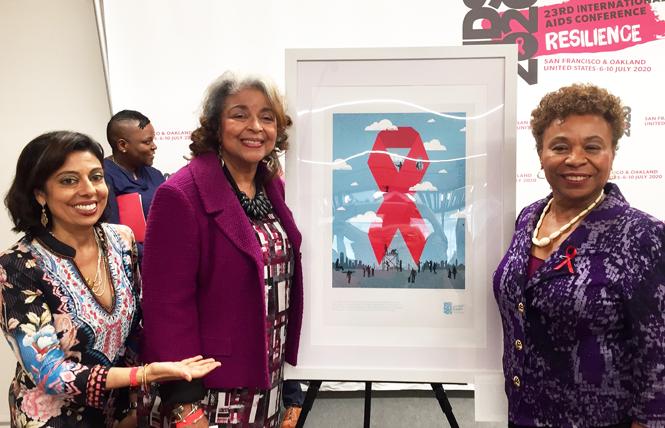 The announcement was not surprising, but the decision to move AIDS 2020 to a virtual online conference is an economic and cultural disappointment for the Bay Area. The conference would have been held in San Francisco and Oakland for the first time, bridging two cities at the forefront of the AIDS epidemic. Not only an economic loss for local businesses, the cancellation of an in-person conference also limits the ability to broadcast its message through related public protests and events like an exhibition of the AIDS quilt.

Sponsored by the International AIDS Society, AIDS 2020 was expected to draw upward of 20,000 participants from more than 170 countries. Although the organizers concluded that it would not be safe for people to travel and gather in large numbers in the Bay Area, they say the virtual conference "will continue to shine a spotlight on our host cities, San Francisco and Oakland, exploring the tale of these two cities through science, innovation, and activism."

The conference's switch to an online format is another effect of the novel coronavirus' alteration of life as we knew it. Even when shelter-in-place directives are lifted — San Francisco and most of the Bay Area this week extended the order until May 3 — life will not suddenly resume as it was. There likely will be a gradual decrease of physical distancing as everyone regains confidence to gather and work in a transformed world.

AIDS 2020 officials said that while the conference would be changing, it would still offer important presentations.

"AIDS 2020: Virtual will still be a fantastic meeting and will include sessions on COVID-19 and the attempts to define the relationship between HIV and COVID-19," San Francisco local conference co-chair Dr. Monica Gandhi of UCSF and Zuckerberg San Francisco General Hospital wrote in an email to the Bay Area Reporter. "While we are disappointed not to welcome our HIV community in person to the Bay Area, AIDS 2020: Virtual will equalize access, create new pathways for collaboration, and maintain international impact."

As we reported, the organizers acknowledge that much remains to be learned about how COVID-19 affects people living with HIV. Most experts think those who are on effective antiretroviral treatment with an undetectable viral load and a high CD4 count are not at increased risk of infection. But a substantial proportion of HIV-positive people have not achieved viral suppression, and many are older and have underlying health conditions that could make them more likely to develop serious illness.

That was the primary reason for the change: the safety of those thousands of attendees, including those living with HIV/AIDS.

Economic fallout
The AIDS conference was, of course, a particular event that would have contributed slightly to the local economy. That so many people were suddenly unemployed will have deeper and longer-lasting consequences, even when businesses reopen. Thankfully, San Francisco has already provided some help to those affected economically by the coronavirus. Mayor London Breed established a fund for smaller arts organizations and artists; small businesses can also apply for low-interest loans or are allowed to postpone payment of fees and some taxes. But the economy won't suddenly return to where it was just a month ago — at least, not for a while.

The situation in Oakland, which has fewer financial resources, is dire. Just before the AIDS 2020 decision, Kaiser Permanente announced that it was scrapping plans for a $900 million headquarters project in Oakland. The 1.6 million square foot office tower would have been the city's biggest commercial project, according to the San Francisco Chronicle, which broke the story.

Kaiser said it would instead focus on rehabbing its current office space in Oakland, but the loss of jobs from the tower project is a reminder that the East Bay city was struggling even before the pandemic. It could also be a glimpse of what's to come: a possibly weakened commercial real estate market, which could also affect San Francisco. Developers may have a harder time financing such projects, especially in these uncertain times.

Breed said Tuesday that San Francisco's budget deficit for the next two fiscal years is projected to be between $1.1 billion and $1.7 billion. For reference, in December she said the deficit would be $427 million.

"The coronavirus pandemic is an immediate threat to our public health and we're doing everything we can to slow its spread and save lives, but we know that it is also having a major impact on our economy and our city's revenue," Breed stated. "The economic impact that is already hurting our residents and businesses is also going to require difficult decisions by the city moving forward."

The future of San Francisco will depend on the ability of large and small businesses to successfully adapt to a new reality when it's time to open up and return to work.