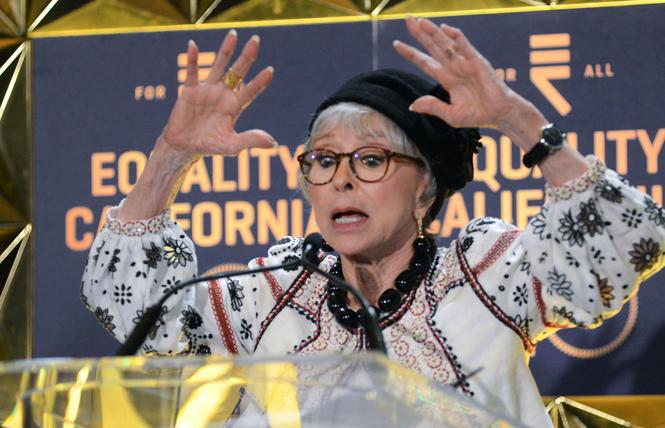 Rita Moreno spoke at Equality California's 20th anniversary gala May 11, 2019. She was the recipient of the organization's Ally Leadership Award. Photo: Rick Gerharter

The fall calendar this year is shaping up to be an especially busy time for LGBT donors and nonprofits. Multiple events have been rescheduled from the spring in light of the novel coronavirus outbreak leading to shelter-in-place orders in the Bay Area through Sunday, May 3.

It remains to be seen how successful the fundraising shindigs will be as they are purposefully held earlier in the year so to avoid the already hectic fall schedule packed with other nonprofits' yearly galas, street fairs, and other outdoor events followed by the holiday season that kicks off with Halloween.

"People try to be respectful with the timing of one another's events. Competition doesn't help any of us, and people really want to be supportive, knowing everybody has to do their event," said Roger Doughty, president of Horizons Foundation, which promotes philanthropy in the LGBT community throughout the Bay Area. "So to the extent people are canceling or postponing spring events, yes, it is conceivable there will be more events in the fall."

Horizons pushed back its annual Give OUT Day online fundraiser for LGBTQ nonprofits from April 23 to June 30, with the "early giving" period beginning June 1. It is still planning to celebrate its 40th anniversary on September 12 at Pier 27 in San Francisco.

But Doughty told the Bay Area Reporter this week there is some uncertainty surrounding whether his agency's event and those of others will be able to be held even in the fall due to the pandemic.

"The big question is how many people are going to be allowed to gather in one place up through, say, the end of the year," said Doughty. "If you have a 500 or 1,000 person gala will that many people in one place be allowed? Nobody knows; it is a valid question."

Some financial relief for impacted nonprofits is coming now via $200,000 in immediate emergency grants Horizons is awarding to Bay Area LGBTQ organizations, which in light of having to cancel their fundraisers and having limited financial reserves may have to resort to laying off staff and cutting back on programing in order to survive.

Horizons is seeking donations toward an LGBTQ COVID-19 Response Emergency Fund it established, which the foundation noted is the only one of its kind in the Bay Area in an emailed fundraising pitch last month. As of Tuesday it had raised $100,000 from donors in addition to the $200,000 the foundation seeded the fund with from its own budget.

Fundraising for the fund will be ongoing for the foreseeable future. Horizons staff will begin reviewing grant applications this Friday, April 3, with checks of up to $20,000 per nonprofit being sent out soon thereafter.

As the B.A.R. covered all through March in a special online story as local officials began banning large gatherings in an effort to curtail the spread of the virus, numerous local LGBT nonprofits and national groups hosting gala dinners in San Francisco announced date changes for their major fundraising events. Most were moved to later in the year, while a few were canceled outright like the annual AIDS/Lifecycle bike ride that was set to kick off in late May and funds both the Los Angeles LGBT Center and the San Francisco AIDS Foundation.

And SFAF's annual Dining Out For Life event, where participating restaurants where to donate a portion of their proceeds on Tuesday, April 21, has been retooled this year as Dining OUTIN For Life. In light of current circumstances, the nonprofit is asking diners to order takeout or delivery from restaurants that day and to also donate directly to SFAF.

Restaurateurs are not being asked to give any money this year since they have been hit hard by the orders for people to remain home. They can still sign up and promote their menus for people to see what they can order at the event's website https://www.doflsf.org/

In releasing the nonprofit health care provider's 2019 annual report Monday, CEO Joe Hollendoner noted that the agency was still providing onsite services such as treatment for sexually-transmitted infections and emergency HIV-related prescriptions and virtual access to its other programs. He asked that people make a $25 donation to keep its emergency services ongoing, as it was expecting to raise $9 million or one-fifth of its budget from the bicycle ride.

"As we come together as a community to confront new challenges related to COVID-19, we are committed to providing essential health services because we know that people living with HIV and other vulnerable communities need us now more than ever," wrote Hollendoner, referring to the respiratory illness caused by the virus.

Openhouse, the LGBT senior services provider based in San Francisco, canceled its annual Spring Fling brunch fundraiser and tea dance that was to take place this Sunday, April 5. Instead, it is hosting a virtual Openhouse Spring Into Action event that day at noon that will be livestreamed on its Facebook page at https://www.facebook.com/openhouseSF

People can also join in via Zoom by sending an email to mmctire@openhousesf.org for an invite. Attendees will hear about the agency's work over the last year; the event will also kick off a special fundraising campaign for the agency.

Maitri Compassionate Care, the hospice for people with HIV/AIDS in San Francisco's Duboce Triangle neighborhood, pushed back its annual Bliss Gala from May 3 until Sunday, September 20.

"Maitri will continue our work of providing compassionate respite and hospice care for people living with HIV/AIDS and ensuring that no one has to suffer, transition, or die alone. But, we need your support now more than ever," noted Executive Director the Reverend Rusty Smith in an announcement about the date change posted to the hospice's website.

More fundraisers normally held in May or June could also be postponed depending on how well the public adheres to the emergency health orders to remain at home as much as possible other than going out for essential needs like food, medicine or to see a doctor. Already, many June Pride Month celebrations around the state and across the country have been canceled or pushed back.

Here are some other events that had been given new dates as of March 31. It is not meant to be exhaustive, and anyone wishing to publicize a date change for an LGBT nonprofit's fundraiser should email the B.A.R. at news@ebar.com

The San Francisco LGBT Community Center moved its Soiree annual benefit to Saturday, October 10. The event was set to take place last Saturday, March 28, and is the center's main fundraiser for the year. As the B.A.R. reported last week, the center's building at 1800 Market Street is currently closed and will remain so until the city allows non-essential businesses and other entities to reopen their doors.

Yet its staff continues to provide services remotely, like employment help for those who have been laid off or unable to work their regular job due to the coronavirus outbreak. It is emailing supporters asking them to donate online toward the center.

"While much of San Francisco is shut down, our community's financial needs grow more and more urgent by the day — so we continue to innovate and create new paths to services and safety nets," noted Matthew Rizzie, the center's director of financial services, in one fundraising pitch sent out over the weekend.

Equality California, the statewide LGBT advocacy organization, plans to now hold its 2020 San Francisco Equality Awards Friday, September 11, at the Fairmont San Francisco. One of several such awards galas EQCA hosts around the state, it was supposed to be held at the hotel atop Nob Hill Saturday, May 9.

The National Center for Lesbian Rights, as of now, plans to go ahead with its 43rd Anniversary Celebration with its new executive director Imani Rupert-Gordon set for Saturday, May 30. The dinner portion of the fundraiser will take place at the San Francisco Marriott Marquis that evening, with a dance party for people 21 and older happening afterward at the nearby Metreon City View.

NCLR spokesman Christopher R. Vasquez told the B.A.R. this week that the only event the agency has postponed to date was its Palm Springs Garden Party scheduled for this weekend and now plans to host in the fall.

"Like every other organization, we are monitoring the situation day-by-day and making decisions that are best for the health, safety, and well-being of NCLR staff and everyone involved," replied Vasquez in response to a question about its gala event. "However, during all of the closures and cancellations, NCLR continues to stay open, including our Legal Help Line, and we continue to work every day on behalf of our clients and the entire LGBTQ community."

Web Extra: For more queer political news, be sure to check http://www.ebar.com Monday mornings for Political Notes, the notebook's online companion. This week's column took a humorous look at some of the press pitches in the B.A.R.'s inbox in recent weeks.