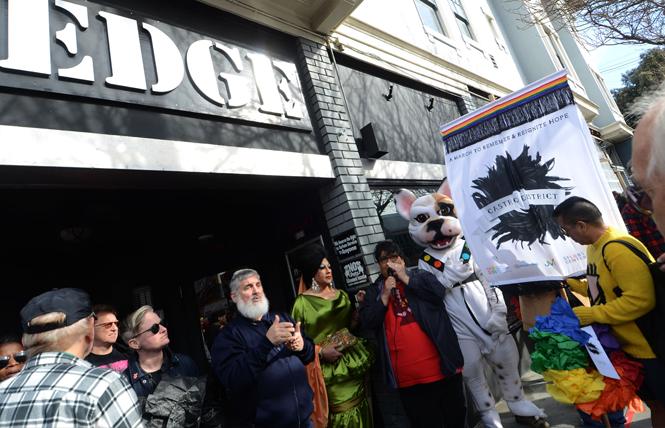 Tina Valentin Aguirre, third from right, speaks about the importance of the Edge Bar during Juanita MORE!'s Castro March to Remember and Reignite Hope February 29, before physical distancing was instituted in San Francisco. Photo: Rick Gerharter

[Editor's note: This article is about an event that took place before widespread physical distancing orders were implemented and non-essential businesses had to close.]

A few weeks before public health officials ordered all non-essential businesses to close due to the coronavirus outbreak, there was a march in the Castro to remember shops that were shuttered before the pandemic reached San Francisco.

In fact, a large crowd was on hand in late February as Juanita MORE! organized A March to Remember and Reignite Hope — before physical distancing became the norm. Its focus was on businesses that had closed due to rising rents but it also celebrated those that have survived. Now, with the Castro a ghost town (along with other neighborhoods in San Francisco, the Bay Area, and state), it's uncertain whether some of the once-open shops will return after physical distancing is eased, and what form those companies will take.

Participants at the February 29 march were intent on keeping the Castro vibrant, however, and are likely to work toward that aim in the future.

MORE! had organized a similar march in 2018 in the city's Polk Gulch neighborhood.

"As you can see and hear there's not a lot of life here anymore," Jones told the Bay Area Reporter as the marchers were gathering. "So we wanted to create an event that causes us to think not only about yesterday's Castro but about tomorrow's Castro."

"I organized this event because I celebrate both old and closed and new businesses," added MORE! "I want to keep the legacy alive in the Castro."

The march went up Castro Street from Market to 19th streets, and then came back down Castro on the other side of the street. Marchers then turned onto Market Street and continued on to the recently shuttered Flore cafe, which at the time was serving as the San Francisco headquarters for Elizabeth Warren's presidential campaign. (She dropped out of the race March 5.) Black wreaths were laid at the doorsteps of businesses that have been lost, while rainbow wreaths were placed in front of those that were open.

"I'm here because it's important to support our communities and the LGBT-owned businesses that are their backbone," said Brenden Chadwick, a 29-year-old queer man.

MORE! and Mandelman addressed the crowd before the march began.

MORE! also promoted San Francisco Proposition D, which voters approved March 3. Prop D is meant to address the city's retail vacancy crisis — particularly pronounced in neighborhoods such as the Castro and North Beach — by taxing owners or renters who keep ground floor retail and commercial spaces vacant at rates as low as $250 and as high as $1,000 per street-facing foot.

"A lot of us feel mixed feelings about the Castro," Mandelman told the crowd. "We love it, there is so much that is vibrant and exciting about the Castro, but we also know that this is a neighborhood that in a lot of ways is really struggling. We see it in the vacant storefronts, we see it on our streets and sidewalks when we see unhoused folks who are not getting the care that they need, and we see it in the closure of longtime businesses that create those vacancies."

The first stop was Orphan Andy's, the gay-owned diner at 3991 17th Street that's been open for decades, and its neighbor, Twin Peaks Tavern, the first gay bar in the U.S. to have full-length open plate glass windows.

"The Castro Theatre is well known to all of us," Peaches said. "When I first moved to San Francisco in 1996 I came immediately to the Frameline Film Festival and volunteered, which is where I found my initial community. Movie theaters for our community can be regarded sometimes as churches because it's where we come to celebrate what we love. Many of us love movies, movies have changed our lives, they tell our stories. This theater is a cultural pinpoint for the entire city."

A black wreath and a rainbow wreath were placed at Dog Eared Books, at 489 Castro Street. Alvin Orloff placed the wreaths, a rainbow one for Dog Eared, and a black one for the former LGBT bookstore A Different Light, which once occupied the same site.

Terry Beswick, executive director of the GLBT Historical Society, placed a rainbow wreath at Castro Country Club, at 4058 18th Street, a sober space where he once served as executive director. Beswick then placed a black wreath at the site of the former Jaguar Books next door.

A rainbow wreath was placed by Grace Torres at Moby Dick, a gay bar at 4049 18th Street.

Kevin Bard placed a rainbow wreath for Hamburger Mary's, at 531 Castro Street, and a black wreath for the shuttered Patio Cafe, which had operated at the same location.

Photographer Gooch placed a black wreath at the former site of Castro Camera, the business run by the late Harvey Milk located at 575 Castro Street, and where Milk ran his campaign for San Francisco supervisor. (Today the site houses the Human Rights Campaign Action Center and Store.)

"This store was so integral to Harvey's campaign," Gooch said of Castro Camera. "This is where he had his campaign meetings. This is kind of ground zero for the LGBT civil rights movement."

Brenden Darby placed a rainbow wreath at Anchor Oyster Bar, 579 Castro Street, while Honey Mahogany recalled a queer-owned real estate firm that operated at 578-580 Castro Street as far back as 1964.

Mahogany also placed black and rainbow wreaths at 500 Castro Street, a rainbow wreath for current business, Harvey's, and a black wreath for the former Elephant Walk, which once occupied the same site.

Tina Valentin Aguirre honored the Edge, a bar at 4149 18th Street. Aguirre recalled that the same site once housed Francine's, a lesbian bar.

Jones addressed the crowd in front of Toad Hall, at 4146 18th Street, which was formerly the Pendulum.

"The Pendulum was primarily for African American men and women, and the people who loved them," Jones said. "We're also in the history books, because of the Pendulum Pirates. Back in the 1980s the San Francisco softball league raised hundreds of thousands of dollars to fight AIDS. Pendulum Pirates was led by a guy by the name of Glenn Burke, an African American brother, first major league baseball player to come out of the closet."

Burke, who played for the Oakland A's, died of AIDS-related complications in 1995.

Jones also noted that women and people of color once found it difficult to get into Castro gay bars, and that once getting into the bars there was no guarantee that you would be served.

Les Natali owns Toad Hall. In 2004, Natali was the subject of anti-discrimination complaints at Badlands, another bar he owns in the Castro, which saw weekly protests that summer.

Baruch Porras-Hernandez celebrated Strut, the men's health clinic operated by the San Francisco AIDS Foundation at 470 Castro Street. Porras-Hernandez also recalled Star Pharmacy, which is now occupied by Walgreens at 18th and Castro streets. Star Pharmacy was where the late AIDS activist Bobbi Campbell put up a sign that warned people of the then emerging "gay cancer," later known as AIDS.

Cip Cipriano, owner of the burned out Q Bar at 456 Castro Street, promised that it would reopen. Cipriano noted that Q Bar had been a gay bar since 1971, once known as Twilight, later called Dirty Dick's, then Castro Station. (A fire last November temporarily closed Q Bar.)

The former home of the Names Project, now Catch Restaurant, at 2362 Market Street, was remembered by Beswick.

Tom Temprano, a gay man who's a trustee on the board of City College of San Francisco and an aide to Mandelman, honored Sui Generis, a consignment shop at 2231 Market Street, and Hi Tops, a sports bar at 2247 Market Street. Temprano also pointed to Detour, a queer-owned bar at 2200 Market Street.

And finally, gay historian Gerard Koskovich remembered Alfie's, a gay disco that operated from 1977-1983 at 2140 Market Street, now home to the dive bar Lucky 13. Alfie's is where Milk held his victory party in 1977 when he was elected to the Board of Supervisors.

Shaun Haines, a 41-year-old queer man, felt that the march was an important event.

"I am here as a representative of our cultural district and I'm here to honor the legacy of our past but also to protect our future," Haines told the B.A.R.