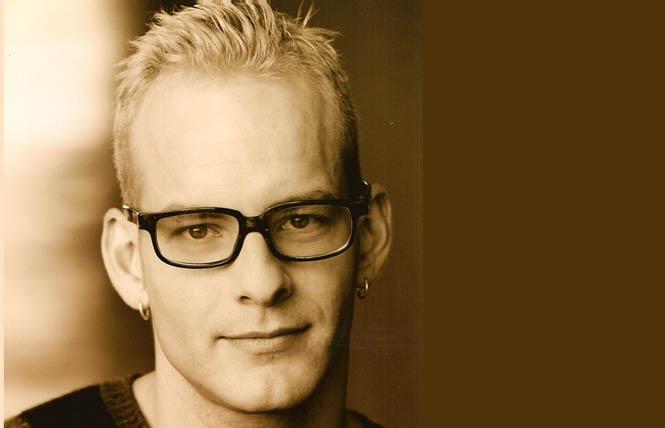 Robb "Lord" Martine, a writer who was once called "the king of San Francisco nightlife," died Friday, March 20. He was 50.

A cause of death was not released.

"Lord Martine always brought glamour and his flare for the dramatic to everything he was involved in," Sister Roma, a longtime friend and member of the drag nuns charitable group the Sisters of Perpetual Indulgence, wrote in a March 25 email to the Bay Area Reporter.

Mr. Martine, a gay man, was born August 29, 1969 in Aurora, Colorado. He went to Aurora Central High School, from which he graduated in 1987, and subsequently earned a degree in fashion design.

In the early 1990s, he moved to San Francisco and became a fixture in the city's LGBT underground clubs. He said in a 2010 interview with Edge Media Network that he made his start as an "androgynous club kid."

"By day I worked at the original Hearst-owned Examiner in the special events department," Martine said in the interview. "By night I was skipping from club to club in Lord Martine couture and gold Chanel medallions."

Martine wrote in a 1998 Examiner column that he "was forthwith dubbed 'Lord' Martine by the reigning club kings and queens of the day (or night as it were)."

"Driven by the desire to see and be seen, for years I submerged nightly into my illusionary land of music, theater, fashion, dance, art, gossip and scandal," Martine wrote. "On this course, I acquired nightlife knowledge with each after-dark adventure, carrying me to the P-cubed (Professional Party Person) status I claim today. And so, with each stroke I open the voyeuristic glory hole that allows you to peer into an after-dark abyss where you can find little Lord Martine living out his childhood fantasies ... still playing, just the way Mama taught."

Martine subsequently wrote the nightlife column, Tearing up the Town, in the San Francisco Chronicle and served as editor-in-chief of Gloss magazine before Cecil Russell. He was simultaneously a special events producer for Flavors You Crave.

When contacted by the B.A.R. March 25, Russell said he had known Martine for over 25 years.

"He was always smiling, friendly, and genuine — never saw him in a bad mood," Russell said. "He loved to smile and laugh. He loved to entertain people."

The Edge story stated that Martine was an instrumental figure in Jock Sundays at Lookout, the Gloss magazine Holiday Soiree, and Radar at Club Trigger (a nightclub that was in the space that Beaux occupies today).

Chris Hastings, the owner of Lookout, said Martine's influence made an indelible mark on Castro revelry.

"As a producer he was instrumental in launching some of the earliest parties at Lookout and played a significant role in shaping the culture and building the community that lives on there today," Hastings wrote to the B.A.R. March 25. "His superhero-themed party Activate was an evolution of Castro nightlife, and he played a key role in starting Jock Sundays, which is still going strong 12 years after its inception. While it has been years since he worked in nightlife, the stamp he placed on queer nightlife in San Francisco is indelible."

Hastings wrote about what Martine was like personally, as well.

"Lord Martine was passionate, charismatic, and kind," Hastings wrote. "He had a flair for the dramatic and an energy that was contagious. He was a creative force of nature with an incredible ability to not only have a grand vision but to make it become a reality."

"I'll never forget the year he was assistant to our mutual friend Larry Hashbarger, the director of the iconic Macy's Passport fashion show. Martine invited Madeline (an SF drag legend) and me as VIP guests.

"As people were taking their seats, he pulled us aside and told us to wait," Roma added. "Then minutes before the show started Martine had a giant spotlight shine on us as Madeline and I took out seats. It created quite a sensation! He was a genius."

Hashbarger did not immediately respond to a message seeking comment.

Drag artist Heklina, a co-owner of Oasis, said she has known Martine for about 20 years.

"Lord Martine was an incredibly talented event planner, seamstress, florist ... really, anything he set his mind to," Heklina wrote to the B.A.R. "I lost touch with him over the past few years, and am saddened to know I will never get to see his face again. Rest in peace, Martine."

At the time of his death, Martine still lived in San Francisco and was working on a variety of projects, including floral design. He had launched the Lord Martine Global organization.

Friends of Martine can leave messages at the website of the Sullivan's and Duggan's Serra Funeral Services.