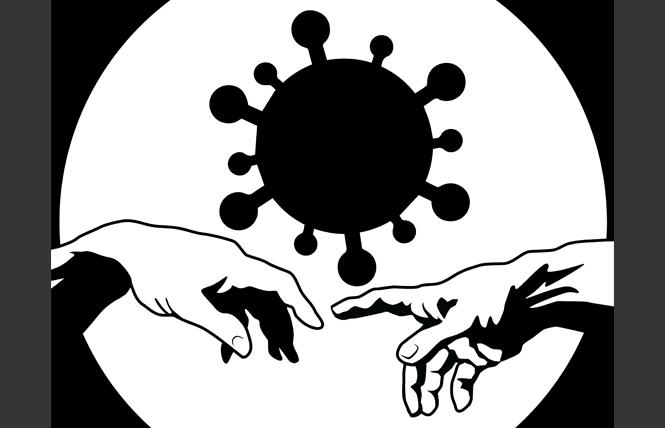 Some people think that being transgender is a mere choice, just a bunch of people who — apologies to my non-trans female siblings — just want to wear a dress and makeup and call themselves women. That any one of us would continue to exist and be out in this climate lays bare how ridiculous these notions are.

I would say that being a transgender or nonbinary person in 2020 means you are an absolute bad ass.

The U.S. Supreme Court holds our rights in its hands, with decisions expected by June that could strip us of our rights from being considered a part of Title VII. This could have a domino effect, removing our rights up and down the 1964 Civil Rights Act. In two cases before the court, the justices must decide whether Title VII prohibition of employment discrimination "because of sex" can cover sexual orientation, and whether it can cover transgender status.

Not intent to wait for the high court, the Trump administration has attempted to roll back LGBTQ rights — and especially trans rights — from nearly every department in the federal government. I barely need to remind readers that it has removed us from the military, but it goes much deeper than that, with three-plus years of work done to hamstring the rights of transgender people.

Meanwhile, the general attitude against transgender people has eroded in kind, with some painting transgender and nonbinary people as brainwashed, sex offenders, deluded, or just plain evil. Many of those same attitudes are echoed by some on the right.

Further, a lot of this is augmented by an increase in racism, misogyny, xenophobia, and a whole host of sentiments against anyone who isn't white, male, straight, able bodied, and rich.

Striding right into the middle of all this, of course, is yet another dark specter, as the world falls into the grip of COVID-19, the coronavirus pandemic. As our federal government continues to weed out anyone who it views as otherwise undesirable, we face even tougher times due to a killer virus and the economic catastrophe being left in its wake.

In the midst of this much hardship rides each of us, living in a world where even if we contract this virus — assuming hospitals are not entirely overwhelmed by the time you read these words, of course — we could still find ourselves mocked in the hospital, treated as lesser people, misgendered, deadnamed, blamed for our condition, or even refused care for being nonbinary or transgender.

Today, we find ourselves living in an era of sheltering in place, where it will be all that harder to be ourselves in society.

Some of us might be living at home, or with partners and family members who are hostile to our trans or enby (nonbinary) selves, where being out may be a one-way ticket to the streets in the midst of a time when we are being told to stay indoors.

If to survive these times you find it necessary to detransition or otherwise sublimate yourself and your feelings, please know that you are no less valid. First and foremost, you need to do what you have to in order to survive, and how can we not respect such a choice in days like this?

This will be a time where it is all the more vital that we keep in touch with each other, and be patient, caring, and understanding with each other. Our community can often be a volatile one, as we often have to fight to assert our identity, even among each other. In these days, however, it's going to be far more important to reach out, and provide a welcoming ear to those in need.

This is the time to work on finding safe places to meet with your community. In-person meetups are largely canceled, so look to your community online. Maybe it's on Facebook or Twitter, or a discord server (chat app), or on Animal Crossing (a Nintendo game that recently came out with a new version). It might be in a virtual world or on a message board. Wherever it is, find it and hold onto it. We'll need these places: it could be a matter of life or death for some of us in these grim times.

While everyone is running around panic-buying toilet paper, it's going to be important that you look at some of your basic needs as well. If you are on medication, now is the time to call and see if you can't get an extra refill or two. It may become even harder in the next few months to have an easy to access supply of hormones and other medications.

Stock up, reach out, and do all you can to survive these times. That's what matters right now.

Yet here is the harsh reality: No one person's survival is ensured. Even in the height of the Obama years, as we cheered on expanded rights and visibility, we still faced danger and death. We're experiencing yet more challenges, not the least of them is the severe health risk that every member of the human race is facing.

The trans community has gone through decades — centuries — of hardship. We have survived some of the worst of times, faced ridicule and death in the best of times, and still, as a whole, continue to exist. As I said, we are bad asses.

That is what I want to leave you with. I want you to remember that and know that no matter how scary the world is right now, no matter the hardship, no matter the challenge, we can rise to the occasion. Our community can continue to grow and be strong — as can each one of us.