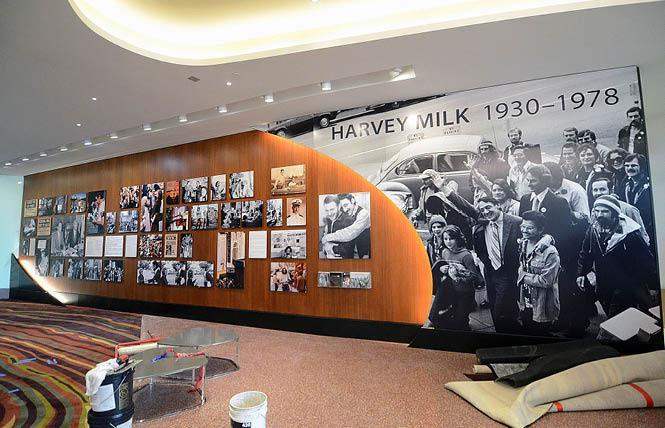 The opening of the permanent SFO Harvey Milk installation, shown here still being worked on earlier this month, has been delayed. Photo: Rick Gerharter

San Francisco International Airport had planned to open to the public its permanent installation honoring the late gay supervisor Harvey Milk Tuesday, March 24, as another section of the under-renovation terminal named in his honor came online.

But those plans have now been scrapped due to the novel coronavirus outbreak. The airport announced early Friday, March 20, it would not activate for "at least" four weeks the new nine-gates that had been planned to open next week.

An advisory from the airport noted that SFO officials "will not establish a new opening date for this phase until at least mid-April." Despite a dramatic falloff in passengers due to the global pandemic, the airport remains open at this time.

In light of the revised schedule for the Harvey Milk Terminal 1 renovation project, JetBlue and Southwest will remain in their current ticket counter and baggage claim locations in the terminal and continue to depart from the same gates inside it. And all American Airlines check-in and gate activities will remain in Terminal 2 for the time being, noted the airport's news release.

"In accordance with the San Francisco Health Order, which defines construction related to airport operations as essential, construction crews will continue to work on the Harvey Milk Terminal 1 project, to ensure the next phase is ready for activation once a new public opening date has been established," stated the airport.

As the Bay Area Reporter has chronicled in past articles, San Francisco officials named the first of SFO's three domestic terminals in honor of Milk after a proposal to rename the entire airport after the gay icon was ejected. It is the first airport facility in the world named after an LGBT leader.

Milk was the first gay person to win a political office in San Francisco and California with his 1977 election to a seat on the Board of Supervisors. Tragically, disgruntled former supervisor Dan White killed Milk and then-mayor George Moscone inside City Hall the morning of November 27, 1978.

It blocks off the rest of the facility still being remodeled and measures 380 feet long by 30 feet tall. It is slated to come down sometime in early 2021. The terminal is undergoing a phased $2.4 billion remodel expected to be completed in 2023.

The next section opening to travelers with nine new gates is in what is known as South Harvey Milk Terminal 1. The facade outside now sports signage denoting it as "Harvey Milk Terminal" in large black letters and as "Terminal 1" in slightly smaller letters below Milk's name.

Immediately to the left of the new American Airlines check-in area, directly in front of the entrance doors to that section of the terminal, will be a a small nook that houses the permanent Milk installation. Its design is reminiscent of a 1970s den or rec room in a private home, as it sports wood paneling, olive green and burnt orange swivel chairs, and a wavy carpet featuring a maroon, green, and red color palette.

"It should be a wonderful amenity for everyone flying through here," Tim O'Brien, assistant director and curator of exhibitions for the SFO Museum had told the B.A.R. during a sneak peek Friday, March 6, of the installation.

It is officially titled "Harvey Milk: Messenger of Hope" and is in what the airport is referring to as the Milk terminal's Central Inglenook. It features 43 images that provide airport visitors a snapshot into the various stages of Milk's life, from his boyhood days in New York and service in the U.S. Navy in the early 1950s to his time as a community activist and groundbreaking politician in San Francisco during the heydays of the 1970s.

The images are arranged chronologically right to left and mounted on the wall in varying sizes on dye-infused aluminum. Most of the images presented in the permanent installation came from the ones featured on the temporary wall that were sourced from public submissions or the archives of the GLBT Historical Society and the James C. Hormel LGBTQIA Center at the San Francisco Public Library.