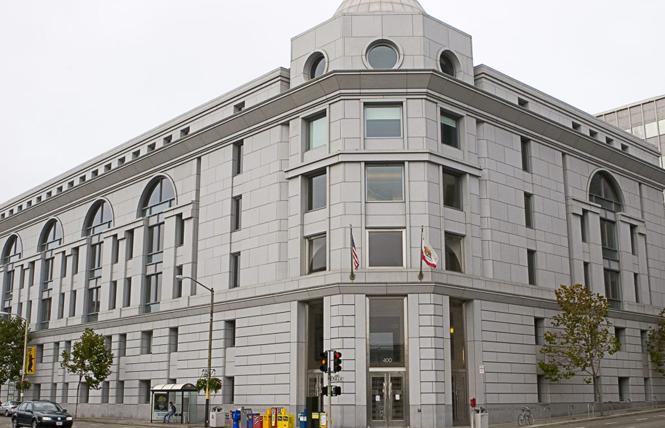 San Francisco courts have put a hold on nearly all evictions, as fallout from the coronavirus continues to economically impact thousands of people.

The move, first reported by 48 Hills March 19, follows other actions by state and local officials to ensure that people can stay in their homes.

A court spokesman told the online publication that San Francisco courts have put a 90-day stay on all items related to unlawful detainer cases, including trials and motions. (Eviction cases related to violence, threats of violence, or health and safety issues are exempt.)

"ALRP is open for services, and eviction defense legal services are considered essential services by the city," Bill Hirsh, ALRP executive director, wrote in an email. "Most ALRP staffers are working remotely and communicating with clients by phone and email. While most evictions in San Francisco have been postponed, not all evictions have been stopped. However, the situation is fluid and we are still monitoring the status of evictions in San Francisco."

Right now the agency is open by appointment only. It serves residents in San Francisco, Alameda, Contra Costa, Marin, San Mateo, Solano, and Sonoma counties, according to its website.

Hirsh noted that his office has not seen a significant increase in evictions during the last two weeks.

"I think this crisis is of particular concern for people living with HIV and for seniors," he wrote. "We are dedicating to ensuring that all of our clients stay housed and healthy. Most of our clients are extremely low-income. There is much the city can do to support them. If people know of people living with HIV who need assistance, they should check on them and see if they need help. For ALRP, we can use financial support so that we can continue to be there for our clients."

The new directive from the courts may have played a role in one gay resident staving off an eviction.

D'Arcy Drollinger, co-owner of the Oasis nightclub on 11th Street, posted on Facebook March 17 that he had been served with an owner move-in eviction, expressing shock that his landlord would do such a thing in the middle of the virus outbreak.

"I just got served with eviction papers for my apartment," Drollinger wrote on Facebook. "An owner move-in, so it's legal. Who sends an eviction notice in the middle of a pandemic? Could the timing be any f---ing worse? This would be hilarious if it was a movie and not my life."

On Thursday, March 19, Drollinger posted that the eviction had been withdrawn. He thanked gay state Senator Scott Wiener (D-San Francisco) for his help. He has since deleted all postings regarding the eviction. At press time he had not responded to the B.A.R.'s request for a comment.

"We have been informed that in the midst of the COVID-19 pandemic, including national, state, and local states of emergency, and local stay-at-home orders, San Francisco Superior Court continues to advance unlawful detainer trials," the March 18 letter read in part. "We request that the Superior Court place a moratorium on all unlawful detainer trials with the exception of evictions resulting from health and safety issues (e.g. tenants harming or threatening to harm other tenants.

"As we move through this unprecedented pandemic, we must focus exclusively on the health of our community," the letter continued. "For example, a massive number of businesses and nonprofits are shutting down and suffering significant harm in order to keep our community safe. As we have with so many other aspects of society right now, we need to hit the pause button on evictions until this emergency ends. The last thing we need is for people to have to go to court and lose their housing exactly when health authorities are telling us all to stay at home."

In an email before Drollinger briefly posted the update, Wiener told the B.A.R. that he and Ting will co-author legislation to put in place a statewide moratorium on residential evictions.

"I will do everything in my power to stop this eviction," Wiener wrote, referring to Drollinger's case. "Also, Supervisor [Rafael] Mandelman and I are sending the owner a joint letter asking them to withdraw the eviction notice, and I spoke with the San Francisco Apartment Association to ask them to help, which they are."

Breed issued a 30-day moratorium on residential evictions related to the financial impacts caused by the novel coronavirus.

As the B.A.R. reported March 13, a news release from the mayor's office stated that under the order, a tenant must notify their landlord that they cannot pay due to a COVID-19 related impact, referring to the illness caused by the virus. https://www.ebar.com/news/latest_news/289383

"Within one week of this notice, the tenant must provide documentation or other objective information that they cannot pay rent. Tenants will have up to six months after the termination of the emergency declaration to repay any back due rent," it continues.

Andy Lynch, deputy communications director for the mayor, spoke to the B.A.R. about the order.

"The residential eviction moratorium that Mayor Breed issued prevents evictions as a result of non-payment of rent resulting from issues relating to coronavirus, which she is able to do as a result of the local emergency she declared on February 25," Lynch said. "People should focus on staying healthy and following public health recommendations without having to worry about being evicted and finding a new place to live."

Newsom issued an executive order March 16 intended to protect renters and homeowners during the crisis. The governor acknowledged that many people were facing a substantial loss of work hours and wages, or were being laid off, which affects their ability to keep up with rent, mortgage payments, and utility bills.

Newsom's order authorizes local governments to halt evictions for renters and homeowners, slows foreclosures, and protects against utility shutoffs for Californians affected by COVID-19, according to a news release from the governor's office.

"People shouldn't lose or be forced out of their home because of the spread of COVID-19," Newsom stated. "Over the next few weeks, everyone will have to make sacrifices, but a place to live shouldn't be one of them. I strongly encourage cities and counties take up this authority to protect Californians."

At the federal level, U.S. Department of Housing and Urban Development Secretary Ben Carson, in consultation with the Trump administration and the Coronavirus Task Force, on March 18 authorized the Federal Housing Administration to implement an immediate foreclosure and eviction moratorium for single-family homeowners with FHA-insured mortgages for the next 60 days.

"Today's actions will allow households who have an FHA-insured mortgage to meet the challenges of COVID-19 without fear of losing their homes, and help steady market concerns," Carson said in a news release. "The health and safety of the American people is of the utmost importance to the department, and the halting of all foreclosure actions and evictions for the next 60 days will provide homeowners with some peace of mind during these trying times."

As previously reported, as of Thursday night, California is under a statewide stay-at-home order issued by Newsom. It is similar to county health orders in San Francisco and the rest of the Bay Area requiring residents to shelter in place and practice social distancing (staying at least six feet away from other people). Non-essential businesses are closed.

The new one-stop COVID-19 state website is at www.covid19.ca.gov