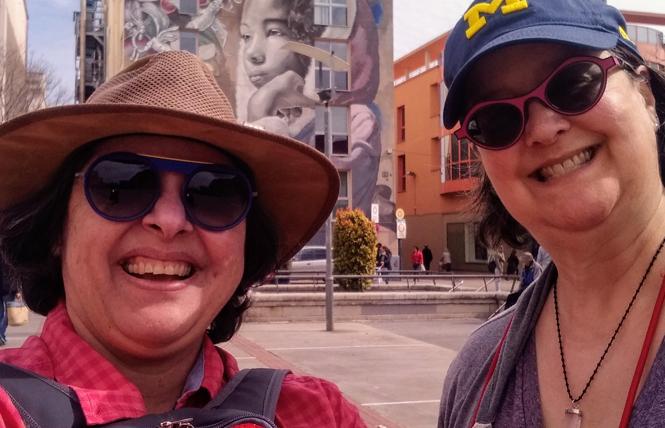 Silicon Valley lesbian couples traveling abroad are trying to get home amid the global coronavirus pandemic.

Two couples, Leslie Bulbuk, 57, and her wife, Marta Donayre, 50, and Karin Bogliolo, 79, and her wife, Judy Rickard, 72, are attempting to navigate themselves home during their respective vacations.

Bulbuk and Donayre, who left on a three-week vacation to Spain February 24, are now locked down in their Barcelona Airbnb. Donayre only steps outside into the barren streets guarded by Spain's military to take the couple's Chiweenie, Ian, for a walk.

The country is now the world's fourth most infected nation as novel coronavirus cases spiked over the weekend with an estimated 8,000 people infected and nearly 300 dead from the virus, according to media reports.

Bogliolo and Rickard are aboard Holland America Line's 128-day Amsterdam's Grand World Voyage that departed Fort Lauderdale, Florida January 4. It is sailing toward Fremantle/Perth, Australia where all 1,300 passengers, including others who are LGBT, will end their vacation and find their way home when they disembark March 22.

Erik Elvejord, Holland America Line's director of public relations, confirmed the decision to end the cruise's journey in a statement to the B.A.R. March 17.

The cruise line is owned by Carnival Corporation, which is the parent company to Carnival Cruise Line, Cunard, and Princess Cruises.

Dream vacations interrupted
The women's vacations were supposed to be dreams come true, but they have turned into nightmares for the couples as the pandemic exploded around the world since February.

The World Health Organization officially declared the novel coronavirus a pandemic on March 11.

Bulbuk and Donayre's journey through small Spanish towns along the Mediterranean coast was to celebrate their 20th anniversary.

Bogliolo and Rickard were celebrating a series of life events: Rickard's birthday, their domestic partnership anniversary, and ultimately their wedding anniversary that has yet to be legally recognized because they are a binational couple, as they sailed around the world, they wrote in an email from the ship.

It was the couple's second grand world cruise aboard Holland. They originally sailed around the world in 2018. This time they were excited about the ship's itinerary sailing to Antarctica, South American, and some African ports among others, they wrote.

Bogliolo and Rickard are disappointed and unhappy about how the cruise line is handling the situation, from not conducting health screenings to not helping passengers return home, especially for repeat customers who paid $50,000 or more.

"This is not just a trip cut short," the couple wrote. "This is a health and safety risk and very bad on Holland and Carnival's part."

The couple are safe, they said.

"We are safe and healthy," wrote Rickard, a travel writer and photographer.

The ship hasn't been quarantined and "there are no known or suspected cases of COVID-19 on board," confirmed Elvejord.

The two women are feeling anxiety and a bit stressed, they wrote. Bogliolo was born in Germany during World War II. When she was 5 years old she temporary lived in a displaced persons camp before she became a citizen of the United Kingdom, they explained.

The couple met in 2005 and went through a long struggle to be together that Rickard documented in her book, "Torn Apart: United by Love, Divided by Law."

The two retired women finally settled in San Jose, but the pandemic is bringing back some of the anxiety from those earlier years, they said.

Once passengers disembark from the ship outside of Perth, they are on their own to get themselves home. Some passengers have health conditions and can't fly, wrote Rickard.

"Flights are being shut down after they are booked," Rickard wrote.

Once the couple disembark in Perth, Bogliolo and Rickard plan on staying two nights in the city while they decide what to do next and book their flights, they wrote.

"We are fully aware and understand that some of our guests have concerns about air travel from Australia relative to their age and individual health situations," Elvejord said.

He said that the cruise line's senior medical team aboard the ship and its headquarters in Seattle were "fully engaged in reviewing the circumstances of the very small number of guests that may require special assistance with their travel planning, and in alignment with the International Transport Association's fitness standards for air travel."

The cruise line has offered free internet service so passengers can book their own flights home from Perth, he added. Additionally, the cruise line is offering assistance for guests "who are having difficulty securing air arrangements on their own."

The ship declined guests' request to sail back to its U.S. port because of the lack of onboard medical staff and uncertainty of being able to dock after the 31-day journey due to ports closing because of the novel coronavirus, he said.

"Like the rest of the cruise industry, we are rapidly working to get all guests currently on our ships home," Elvejord said.

Stranded in Spain
The cruise line passengers aren't the only ones having flight troubles.

On March 16, Bulbuk and Donayre awoke to discover that their already rescheduled March 22 Norwegian Airways flight home was canceled without notification or automatic rebooking like it was previously.

The canceled flight happened the same day the airline announced a massive 85% cut to flights and laid off 7,300 employees, which worried the couple.

Getting through to the airline by phone or online was impossible. The couple was blocked by a telecommunications and internet wall, they said.

"I'm sorry to hear about Leslie and Marta's situation," wrote Anders Lindstroem, director of communications, North America at Norwegian, in a statement to the B.A.R. on March 17.

Lindstroem explained that the couple should have received options to rebook, despite the airline blocking the public from being able to book on their site in order for the airline to "prioritize getting stranded passengers home," he wrote.

"We are of course working 24/7 rebooking customers to get them home to their country as quick and easy as possible," he added. "But since this is an extraordinary situation that no airline has faced before, things are taking longer than anyone would wish."

"Hopefully, we will get them home very soon," he wrote.

The couple, who were originally supposed to return March 18, feel stranded.

During the weeks leading up to their departure they watched the headlines about the novel coronavirus. They were concerned but they didn't sense the gravity of the situation.

"At that point there weren't enough details available about the seriousness of the virus," said Bulbuk. "I don't think that anybody knew."

The couple are attempting to keep their spirits up.

"[We are] trying to feel hopeful about getting home," said Bulbuk, who is a legislative aide for Assemblyman Marc Berman (D-Palo Alto).

She admitted that she's experienced moments of depression during the stress of the situation. To quell her fears, Bulbuk has video chatted with friends on Facebook, limited watching the news, and has reached out to her network, she said.

Complicating their fears about being able to return home is the rapidly changing landscape for travel and Bulbuk's health issues.

Bulbuk's autoimmune disorder is complicating the situation, limiting her ability to travel amid the pandemic and making getting home "a little bit more scary," she said.

The couple can't simply pack up and leapfrog around the world's airports or risk getting stuck somewhere else.

Norwegian's attempts to get travelers home might have to come in the form of a refund for Bulbuk and Donayre, who is an English, Portuguese, and Spanish interpreter and translator.

By Tuesday, the couple gave up on Norwegian. They ended up booking two one-way tickets to San Francisco at their own expense aboard Spain's Iberia airline for March 21, Bulbuk wrote to the B.A.R. on messenger.

San Francisco is one of 13 approved gateways into the states for Americans and registered nationals returning from abroad following President Donald Trump's travel restrictions implemented March 13.

They still aren't sure if they will be able to fly home on Saturday, especially with their dog, or if necessary, have to extend their stay in Spain. They won't feel secure until they are home.

The couple were able to extend their stay with their host at their Airbnb in Barcelona once, but when they spoke to the B.A.R. they hadn't reached out to their host or Airbnb.

"Our team is here to support them," wrote Airbnb spokesperson Charlie Urbancic in a statement to the B.A.R. on Tuesday.

"We will closely monitor their case until they arrive safely home," he added. 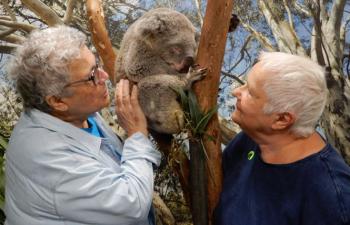 Dream trip
Pandemic aside, Bulbuk and Donayre's trip was everything they hoped it would be.


They traveled through small coastal Spanish villages along the Mediterranean and stayed in vacation rentals.

"We have enjoyed our trip," wrote Bulbuk in a message to the B.A.R. Tuesday, stating that they have been safe.

"We would love to travel more, but absolutely not during a pandemic!" Bulbuk wrote. "Let's just say it may take a while before we stray afar from home again."

"We love to travel," they wrote. "We already said that we would be doing more road trips in America in the future, although we still want to visit friends and family in the U.K. and France."

They haven't given up on cruising either, stating that they might cruise again in the future.

Coronavirus shuts down LGBT events around the world
LGBT event producers around the world are canceling or postponing events from award ceremonies to conferences to film festivals to this summer's upcoming Pride events.

Some producers are choosing to skip 2020 altogether due to the novel coronavirus.

Other event organizers are waiting until later in March to decide whether or not to postpone or cancel events.

"Some events will inevitably face cancellation, curtailment, or postponement," Kristine Garina, president of the European Pride Organizers Association, told the media outlet in a statement.

North Africa's first LGBT+ film festival, hosted by Mawjoudin We Exist in Tunisia, postponed its premiere event until late May. Bucharest Pride announced March 11 it would delay its event by at least three months, reported Reuters.

Its anticipated many other events that have become institutional gatherings will also soon make similar announcements.