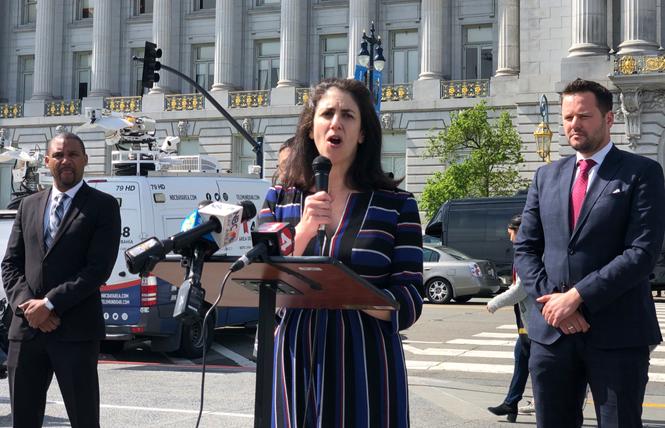 San Francisco officials are taking a number of actions to blunt the economic impacts of the novel coronavirus outbreak.

The impacts both stem from the public health implications of the spread of COVID-19 (the respiratory illness caused by the novel coronavirus) and the economic impact of businesses being directed by governmental authorities to shutter to slow the spread of the virus.

"The moratorium will prevent any resident from being evicted due to a loss of income related to a business closure, loss of hours or wages, layoffs, or out-of-pocket medical costs caused by the COVID-19 pandemic," a news release from the mayor's office stated.

'"Under the order, a tenant must notify their landlord that they cannot pay due to a COVID-19 related impact. Within one week of this notice, the tenant must provide documentation or other objective information that they cannot pay rent. Tenants will have up to six months after the termination of the emergency declaration to repay any back due rent," it continued.

The move came as gay state Senator Scott Wiener and Assemblyman Phil Ting (both D-San Francisco) work on a halt to foreclosures and evictions in California.

Breed followed up that moratorium with another on March 17 that placed a moratorium on commercial evictions for small and medium-sized businesses related to impacts caused by the outbreak.

Breed was empowered to take this action after Governor Gavin Newsom issued an order March 16 authorizing local governments to halt evictions. The order also allows them to slow foreclosures and prevent utility shut-offs.

On March 16, Breed announced a plan to provide paid sick leave for workers impacted by business closures. (See related story.) Citywide and statewide orders in the previous week had forced bars, among other businesses, to close.

As the Bay Area Reporter reported that day, five supervisors announced a legislative package to help those economically impacted by COVID-19 at a Civic Center Plaza news conference.

District 4 Supervisor Gordon Mar announced legislation to create a 14-day period of paid leave and to use public funds to help small and medium-sized businesses comply.

"The emergency expansion of paid sick leave by Mayor Breed yesterday was a positive step," Mar said at the board meeting. "But it's not enough to leave it to employers to decide."

Mar also said it was "shocking" that a bill that passed the U.S. House of Representatives over the weekend to provide paid sick leave exempted employers who have 500 or more employees. Some 59 million Americans work for such employers.

Mar's legislation also calls for the creation of a multilingual workers hotline. According to his legislative aide, Edward Wright, Mar's office is working on that without legislation, too.

"We're working with other departments — labor standards enforcement, workforce development — to do that," Wright said, referring to the hotline, in a phone interview with the B.A.R. March 17. "We are still moving forward to introduce legislation today for the whole breadth of paid leave policies."

District 5 Supervisor Dean Preston is calling for the government to suspend all evictions, except those required for safety reasons.

Although the mayor halted COVID-19 related evictions, Preston said that this wasn't enough.

"This was an important step — it's a start," Preston said. "But unfortunately, it's not enough.

"As I speak today, evictions are still being served in San Francisco. This is exactly the last thing we need right now," he added.

Preston also called for the housing at 555 Fulton Street — near the heart of the scandal involving disgraced former public works director Mohammed Nuru — be used to house the homeless during the emergency.

"There's no reason there should be an eviction unless there's an imminent health threat to landlords or tenants," Preston aide Kyle Smeallie said in a phone call to the B.A.R. March 17. "We are continuing to move forward with our legislation."

"I've never been so happy to have a leading tenants rights attorney on the Board of Supervisors as I am right now," Ronen said.

Ronen announced she was introducing an ordinance that allows the city treasurer to take out a line of credit and distribute funds as no-interest loans to small businesses that would close down otherwise due to inability to pay rent or a mortgage.

"The program will provide no-interest loans up to $15,000 to businesses with receipts less than $1.1 million per year to cover three months of rent, mortgage, or fixed operating costs. Some businesses won't survive without us," Ronen said during the meeting. "They need our help and they need it right now.

"Businesses need more than a stop-gap moratorium. They need income," she added.

Ronen is joining gay District 8 Supervisor Rafael Mandelman in calling for grocery stores to set aside time periods for the elderly and immunocompromised to shop, so they can maintain social distancing from people who are more likely to be asymptomatic carriers of the novel coronavirus.

"It's particularly important that folks in the vulnerable age-range not be exposing themselves to the virus because of their vulnerable immune systems," Mandelman said in a phone interview with the B.A.R. March 18. "I heard from constituents that they felt unsafe being in jammed grocery stores, particularly with young people who may not know they are carrying the virus. Thankfully, many grocery stores are already going in that direction."

Gay Mandelman aide Tom Temprano said that he spent much of March 17 talking to grocery stores.

"I spent a lot of time talking to Safeway and Whole Foods and seeing where they were at," Temprano said in a phone call with the B.A.R. March 18. "Through multiple phone calls you could see the evolution of growing public pressure."

Temprano said that as of Wednesday morning he had not heard back from Walgreens, wasn't able to reach Trader Joe's, and hadn't had luck with Costco or Mollie Stone's yet, but that Whole Foods agreed to open up one hour earlier for senior shopping hours and Safeway agreed to have 7 a.m. to 9 a.m. reserved for "vulnerable shoppers" on Tuesdays and Thursdays.

Temprano said that Canyon Market at 2815 Diamond Street in Glen Park was having a shopping hour from 7 to 8 a.m. daily "no prodding from us necessary."

District 11 Supervisor Ahsha Safai, who co-sponsored with Ronen a resolution calling upon banks to suspend foreclosures, fees, and penalties to small businesses during the outbreak, said he was urging the federal government to write a one-time $5,000 check to every American so they can deal with the financial impact of COVID-19.

"People need to survive," Safai said. "Without income, people won't be able to do that."

District 1 Supervisor Sandra Lee Fewer introduced a resolution calling for everyone to do their part to fight coronavirus. She added that she wanted the Department of Disability and Aging Services to speed up its volunteer-approval processes.

Fewer introduced another resolution calling for Newsom to change the rules so that businesses allowed to sell take-out food can also sell take-out alcohol, if they currently allow on-site alcohol consumption.

"We can provide them immediate, substantial help," Fewer said.

District 6 Supervisor Matt Haney said he was introducing a resolution in support of efforts underway in the House of Representatives to ensure emergency assistance to every American and a resolution asking that the legislation that passed the House be amended to include employees who work for employers with over 500 employees, and that an assembly bill under consideration protect workers from retaliation for taking a leave of absence.