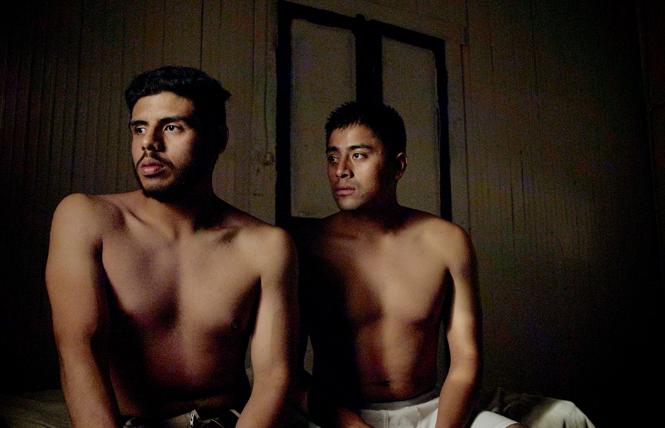 The emotion and love depicted in "Jose," a Guatemalan gay coming of age film, has captivated audiences around the world and garnered multiple accolades.

San Francisco Bay Area residents will be able to experience the award-winning film when it returns to the Roxie Theater beginning this Friday.

The Bay Area Reporter spoke with gay Chinese director and co-writer Li Cheng, 45, and the movie's gay star, Enrique Salanic, 26, who played 19-year-old Jose, about making the movie in Guatemala and its importance and impact.

In the film, Jose falls in love with migrant construction worker Luis, played by Manolo Herrera, 21.

The film, shot in a neorealist tradition in Spanish with English subtitles, follows the young men's relationship; Jose's relationship living with his single mother whom he is not out to, played by Ana Cecilia Mota; and his eventual heartbreak as he quietly navigates alone through his awakening and loss.

David Campos, a gay man who's a deputy county executive of Santa Clara County, emigrated from Guatemala to the United States when he was 14 years old in 1985. He said that he was "touched by the depiction of gay life in that country" in the film.

"'Jose' is the first movie ever to accurately portray the life of an LGBTQ person in Central America," Campos, who's also chair of the San Francisco Democratic Party, wrote in a text message to the B.A.R. "It is real and uncompromising in its portrayal."

Making the movie
The film co-written by Cheng and American expat gay producer George F. Roberson, Ph.D., 56, exudes a subtle quietness, much like "Brokeback Mountain" and "Happy Together," that has resonated with audiences and garnered many awards, including the Queer Lion trophy at the Venice International Film Festival.

"What we wanted to do was to make a classic story with universal emotion that everyone wanted to be connected to," Cheng told the B.A.R. during an interview on WhatsApp from Indonesia, where he's currently living and working on new projects.

Cheng and Roberson purposely restrained from depicting the violence in Guatemala to focus on the gay men's story.

"We want to show people living their [lives] with dignity," said Cheng.

At the same time, the movie is "meant to challenge the audience, it is meant to question and challenge the status quo," wrote Roberson in an email to the B.A.R.

"If the film does not spark debate and action for change and progress and openness and hope and honesty and inspiration, then it is a failure," he added.

Cheng and Roberson, who currently lives in Brazil and Mexico, spent three years conceiving, researching, and developing the movie.

The men, who are business partners, said they moved to Guatemala for two and a half years to produce the film.

The men used an all-Guatemalan cast. Salanic traveled five hours by bus to audition for the part of Jose, said Cheng and Salanic.

Salanic's face was bright and his eyes were shining with excitement, Cheng said, as he watched Salanic read the script. His understanding of the script and his natural acting ultimately landed him the starring role, Cheng said.

A new generation's voice
"This is an important movie because it first gives a voice to many young people who want to be who they are in a space that allows them to be safe and sound," said Salanic in a WhatsApp interview with the B.A.R. "Because of the conservative society that we live in, especially in Latin America, it's kind of hard to do that."

Due to Guatemala's conservatism he felt he didn't want to wait.

"It was time to do this movie," he said. "If we wait for Guatemala to be ready for these kinds of movies ... the world is going to end first, so it's better to do it."

Unlike Herrera's character Luis, who asks Jose to run away with him, and Jose's sense of responsibility to his mother to stay in Guatemala, Salanic sees a future in the Central American country, despite the harsh environment.

A Mayan descendent, Salanic, who was educated in North America, lives in Guatemala where he is working on a project to keep Mayan languages alive. He's hopeful about the country's future because of its youthful culture.

More than half of the country's estimated population of 17.2 million is 19 years old or younger, according to the CIA World Factbook and Population Reference Bureau.

Salanic believes that the film is inspiring many people around the world to raise their voice in their own countries, despite the film not being overtly political.

"I hope they will find a voice in 'Jose,'" he said. "I think that no matter the distance, there is this energy that is uniting us that is giving us a voice and giving us strength" so that future generations can "live more free without fear of being judged, persecuted, or killed."

Roberson wrote that Guatemala is like other countries, such as India, Indonesia, and China that "have very conservative public culture alongside [a] massive youth culture."

The youth culture has "a great desire and hope for change and have [a] very different view of what the future should and could look like," he continued.

Changes are happening in the country, Salanic noted.

Currently, there are two Pride events, one in Guatemala City and the other in Quetzaltenango, Guatemala's second largest city. Guatemala has two openly LGBT congressmembers, Sandra Morán Reyes, a lesbian elected in 2015, and Aldo Davila, a gay HIV-positive man who was elected in 2019.

Salanic has been denied travel visas to promote the film in the United States twice due to officials claiming he is a "flight risk." He doesn't have an interest in leaving Guatemala because it's where his community and family are who love and accept him for who he is, he said.

It is that support from his community that "has given me the strength to have done this movie," he said talking about some of his friends and other LGBT people around the world not being as fortunate as he has been to receive his family's love and support.

"You don't necessarily have to leave the country to have a better life or better experience," he said. "You can make it here in Guatemala."

The film opens Friday, March 13, at 7 p.m. and runs through March 19 at the Roxie Theater in San Francisco. For showtimes and tickets, visit http://www.roxie.com/ai1ec_event/jose/?instance_id=40037.

Chilean trans woman is voice for change in the South American country
A new generation of political activists, unafraid of speaking out three decades after Augusto Pinochet's long dictatorship ended, has a new leader who is no stranger to political dissent.

Feminist and militant leftist Emilia Schneider is the first transgender leader of Chile's oldest student union, the Student Federation of the University of Chile, known simply as Fech.

The 23-year-old law student is the great-granddaughter of General Rene Schneider who opposed Pinochet's 1970 military coup. He was assassinated by a far-right group.

She's advocating for women's participation in political and policy change at the highest level of Chile's government, especially with the proposed referendum to draft a new constitution that will be before the public April 26.

Schneider recognizes her privilege growing up in a liberal, supportive family, being educated, and benefiting from a gender identity law that took effect in December and allows people to legally change their name and sex.

She is very much aware of her unique position and that most women like her struggle with lack of employment opportunities, discrimination, violence, access to health care, and more, she told Reuters.

This is why Schneider is advocating for change.

"We want a feminist constitution," she said. "One that guarantees sexual and reproductive rights, gender equality and greater participation by women and those who do not conform to traditional genders."

Lawmakers recently approved a mechanism to ensure the equal representation of men and women in an eventual constitutional assembly ahead of next month's vote, reported El Economista America, as translated by Google Translate.

The new constitution, along with President Sebastian Pinera's shakeup of his administration, are in response to three weeks of violent protests last October.

Activists are skeptical of the new laws the president introduced due to a divided Congress. They fear that enough change won't happen fast enough.

"We have to keep seeking new policies to generate fresh changes," said Schneider. "Protests alone will not get us there."