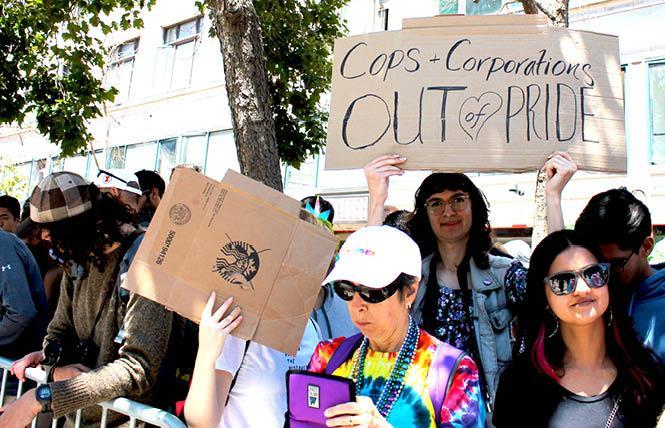 Sylvia, center, raised their sign "Cops + Corporations Out of Pride" along Market Street during last year's San Francisco's Pride parade after other protesters halted the event for about an hour. Photo: Heather Cassell

Around 11 a.m. June 30, 2019, a group of protesters demonstrated against police and corporate participation in Pride festivities by sitting in the middle of the parade route.

On a post to on its website July 3 — and at a news conference later that month — SF Pride officials said they thought the charges should be dropped.

"These activists identify as members of the LGBTQ+ community, but don't agree with how our parade and celebration are structured," said Fred Lopez, a gay man who was serving as interim Pride executive director at the time.

Lopez said at the time that "we have encouraged the DA to drop all charges related to this incident."

Three district attorneys and several months later, that has happened.

"In the eight months since the parade, we have followed all developments in this case closely, and maintaining our request that the charges be dropped," Lopez, now permanent executive director, said in a Pride news release March 5. "The SF Pride parade is seen worldwide as a beacon of free expression, and our team strives to create an inclusive event that makes space for many viewpoints."

The charges were dropped shortly after Chesa Boudin took office as district attorney in January, the news release states.

They subsequently spoke with Matt Donahue, the assistant district attorney in charge of the case, and had an in-person meeting with Boudin February 21, according to Kane.

Boudin "described his desire for a resolution of this case within the restorative-justice model," Kane wrote in a March 5 email to the B.A.R. "We were glad to hear of this result, and SF Pride is pleased that we could offer ongoing advocacy for these members of our community.

Carolyn Wysinger, a lesbian who is president of the board of directors of the San Francisco Lesbian, Gay, Bisexual, Transgender Pride Celebration Committee, said that what the protesters did was "exactly what Marsha P. Johnson did when she threw the first brick at Stonewall" — the anniversary of which the Pride parade annually commemorates. Wysinger was referring to Johnson, the late self-identified drag queen, who, according to Wikipedia, is named in a book on the riots as one of the first three people who pushed back against police.

"I remember my personal disappointment watching those involved be detained on the parade route as my fellow board members and I attempted to have dialogue with the demonstrators," Wysinger said in the release. "I am so proud that we have continued the work that began that day to have these charges dropped. I am thankful to our community for holding us accountable, and proud of our team for their relentless work."

The release said that an investigation by the San Francisco Department of Police Accountability is ongoing. The B.A.R. confirmed this March 5 with Paul Henderson, a gay man who is the executive director of the department.
As the B.A.R. previously reported, SF Pride officials faced controversy earlier this year when they rejected appeals from activists to have Google, its affiliates, and the Alameda County Sheriff's Office banned from participation in the parade.