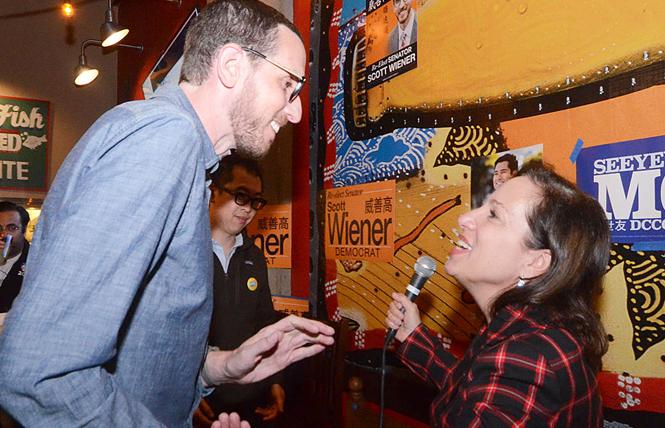 In his bid for a second four-year term Wiener (D-San Francisco) took first place in Tuesday's primary with 54.67% of the vote, according to unofficial returns Wednesday. Fielder, an educator who is Native American and of Mexican heritage, placed second with 32.52% of the vote.

In third place was Republican Erin Smith, a transgender woman, with 12.66% of the vote. Both Smith and Fielder are political newcomers who had never before sought public office, and under California's primary rules, the top two vote-getters regardless of party affiliation advance to the November 3 ballot.

The election results were hailed by Wiener, who came in second place in the primary when he first ran for the Senate seat in 2016 against Jane Kim, whom he had served with on the San Francisco Board of Supervisors. But Wiener, a dogged campaigner, went on to defeat Kim in the general election that fall.

In a Facebook post following Tuesday's election, Wiener wrote, "What an Election Day! We campaigned hard all day and then celebrated. Thank you to the voters of the 11th Senate District for advancing me to the top 2 election in November. Serving as your State Senator is the honor of my life, and I'm so appreciative of the support for continuing our work to create a brighter future for our community. Onward!"

Fielder also touted her second place finish, noting in a statement that she had spent less than $130,000 on her campaign while Wiener benefited from more than $500,000 spent by his campaign and independent committees on his behalf.

Other LGBT legislative races
A record 22 LGBTQ community members, three of whom are Republicans and one a write-in candidate, were known to be running for California legislative seats on the March 3 primary ballot. It was four more than the 18 candidates who ran in 2018, at the time the largest group of out legislative candidates in the state's history.

The tally included three out candidates running for seats in San Diego, all of whom advanced to the November 3 election. (See story here.) Also on the list was Peace and Freedom Party candidate Cassandra Devereaux, a transgender woman who works as an illustrator for the Bay Area Reporter under the name Christine Smith.

She ran in the race for the Assembly District 14 seat covering Benicia, Concord, Clayton, Martinez, Pleasant Hill, Vallejo, Pittsburg, and Walnut Creek. But Devereaux came in third place with 7.4% of the vote; the incumbent, Assemblyman Timothy S. Grayson (D-Concord), took first place with 65% of the vote, while Republican Janell Elizabeth Proctor was in second with 27.5%.

Gay Assemblyman Evan Low (D-Campbell) easily took first place in the race for his 28th Assembly District seat in Silicon Valley. He received 67% of the vote and will faceoff against second place finisher Republican Carlos Rafael Cruz, a real estate adviser who garnered 27% of the vote.

Legislative policy adviser Alex Lee, who is bisexual and worked for Low as a field representative, appears headed to the fall ballot as he is in second place in the race for the open Assembly District 25 seat that includes parts of Alameda and Santa Clara counties. Eight Democrats along with one Republican ran to succeed Assemblyman Kansen Chu (D-San Jose), who was the top vote-getter in his bid Tuesday for a Santa Clara County supervisor seat.

Lee netted close to 16% of the vote in his race, coming in behind first place finisher GOPer Bob Brunton, who won close to 24% of the vote. In third place with 13.33% of the vote Wednesday morning was attorney Anne Kepner, though the county registrar noted the vote count was based on just shy of 87% of the precincts in the district and expected to have an updated tally at 5 p.m. Wednesday, after the B.A.R.'s print deadline.

In an interview with the B.A.R. earlier this year, Lee had predicted that due to so many Democrats in the race only one of them would survive the primary but that person would likely win the seat in November. Should Lee win the seat, he would be the first out bisexual to serve in the state Legislature and at age 24 one of the youngest legislators.

Nothing radical about ensuring healthcare and housing for the wealthiest state in the wealthiest nation in the world. #NotMeUs pic.twitter.com/loDRvDUaio— Alex Lee for State Assembly (@VoteAlexLee2020) March 3, 2020

Along the Central Coast in the race for the 17th Senate District seat, gay former Assemblyman John Laird (D-Santa Cruz) appears headed back to the state Capitol as he took a commanding first place with 42% percent of the vote Tuesday. He is aiming to succeed state Senator Bill Monning (D-Carmel), who is termed out of office this year and is supporting Laird in the race.

Laird is expected to easily defeat the second place finisher in the primary, Republican businesswoman Vicki Nohis, who netted 35.9% of the vote. Falling short were Democrats Maria Cadenas, a lesbian single mother and executive director of the nonprofit Santa Cruz Community Ventures, with 18.6% and rancher John M. Nevill with 3% of the vote.

Also expected to join the state Senate come December is lesbian Assemblywoman Susan Talamantes Eggman (D-Stockton), who placed first with 31.4% of the vote in her bid to succeed termed out lesbian state Senator Cathleen Galgiani (D-Stockton). Landing in second in the primary race for Galgiani's 5th Senate District seat was Republican Jim Ridenour with nearly 28% of the vote.

In third with close to 18% of the vote was Democrat Mani Grewal, a member of the Modesto City Council who was accused of homophobic campaign attacks against Eggman. It prompted Equality California, the statewide LGBT advocacy group backing Eggman in the race, to call on Grewal's supporters to withdraw their endorsements of his candidacy.

"Susan Talamantes Eggman is the champion that Central Valley Voters want and deserve fighting for them in Sacramento," stated Zbur. "We are proud to support Susan's campaign because we know she'll roll up her sleeves and tackle homelessness, veterans' issues and LGBTQ+ civil rights. We're confident Susan will win in November, and we'll be with her every step of the way."

In the suburbs northeast of Sacramento, lesbian businesswoman and senior advocate Jackie Smith, who used to live in San Jose, is mounting her second bid to unseat Assemblyman Kevin Kiley (R-Granite Bay) from his 6th Assembly District seat. She lost to Kiley in 2018 and is again facing an uphill climb this year. She came in second in the primary race, with 37.6%, while Kiley easily took first with 62.4%.

Assemblywoman Melissa Melendez (R-Lake Elsinore) fell short of the goal, coming in first place Tuesday with 41.5% of the vote. Romero, a county education official, was holding on to second with 21.7% of the vote.

Silver, who came close to ousting Stone in 2018 and had planned to run for his seat in 2022, was close behind in third with 20.6% of the vote. As of Wednesday morning, she was short 1,499 votes to advance to the runoff race.

Davies took first place in the primary with nearly 28% of the vote, according to the unofficial returns, while Rhinehart was in second place with 21.7% of the vote. In 2018 he had lost to Brough, who this time was in fourth place with 18% of the vote behind Democrat Chris Duncan, who netted 18.3% of the vote.

Should Rhinehart win the seat in November, he would be the first LGBT legislator from Orange County. Another gay man seeking the adjacent Assembly District 72 seat, lawyer Bijan Mohseni, came up short Tuesday.

Mohseni landed in fourth with nearly 15% of the vote. He was vying to become the first LGBT legislator of Iranian descent.

Every vote counts; thank you to everyone that voted for me today! I'm proud of the issues based campaign we ran & of the thousands of people we met on this journey. (1/2) pic.twitter.com/6O4GCFphgT— Bijan Mohseni (@BijanMohseniCA) March 4, 2020

Abigail Medina, who identifies as both queer and lesbian, is aiming to become the first out state legislator from San Bernardino County. A member of the San Bernardino City Unified School District board, Medina was in first place Wednesday morning with 26.3% of the vote in the primary race for the 23rd Senate District seat. The incumbent, Mike Morrell (R-Rancho Cucamonga), is termed out of office in 2020, and it appears Medina will faceoff against Republican Rosilicie Ochoa Bogh, who was holding on to second place with 25.1% of the primary vote.

Medina had been subjected to personal attacks by fellow Democrat Kris Fellow in an endorsement questionnaire she filled out for the California National Organization for Women. It led that group and EQCA to condemn her doing so, and an apology from Fellow, who ended up in fourth place with 17% of the primary vote.

He heads into the November election as the underdog, having captured 34.5% of the vote Tuesday. Santiago garnered 65.5%, as the pair of Democrats were the only candidates in the race.

More than 1/3 of voters in the district said NO to the status quo. In a Dem-Dem race, this is feedback for the incumbent, for the Democratic Party, and for Sacramento: there is thirst in our district for a different direction in leadership and a different type of representation.— Godfrey Santos Plata (@GodfreyPlata) March 4, 2020

In Riverside County, lesbian Assemblywoman Sabrina Cervantes (D-Corona) was trailing behind her gay Republican opponent, peace officer Chris Raahauge, as of Wednesday morning. According to the unofficial returns, Cervantes was in second place with 49.6% of the vote, while Raahauge was in first place with 50.4% of the vote.

If he can pull out an upset come November in their race for the 60th Assembly District, Raahauge would become the first out gay Republican to be elected to the state Legislature. The GOP has wanted to oust Cervantes ever since she flipped the district blue four years ago.

The affinity group for LGBT lawmakers will see two of its seven members depart come December, Galgiani due to term limits and gay Assemblyman Todd Gloria (D-San Diego) is expected to be elected his city's mayor in November.

As for the two other out candidates who were seeking Assembly seats Tuesday, one was bisexual escort Starchild, who qualified as a write-in candidate against Assemblyman David Chiu (D-San Francisco). It will be a while before it is known how many people wrote his name down.

And Alex Walton, like Raahauge a member of the Log Cabin Republicans club for LGBT GOPers, landed in last place with 5.3% of the vote in the primary race for the open 33rd Assembly District seat in the state's High Desert region east of Los Angeles. State Assemblyman Jay Obernolte (R-Hesperia) opted to run for an open House seat rather than seek re-election.