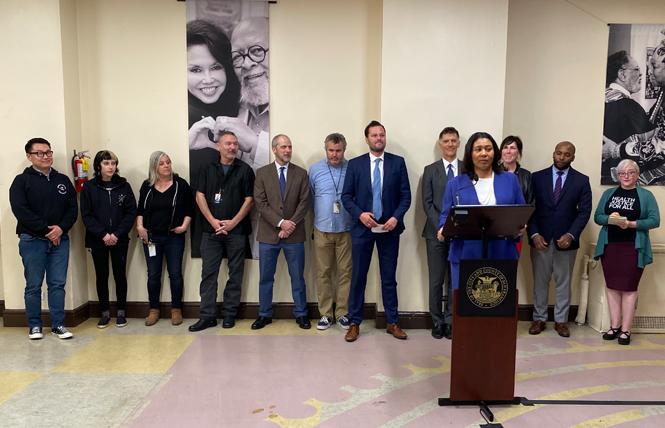 Last week, a federal judge in Philadelphia cleared the way for a nonprofit agency to open a supervised injection site there. The lengthy court fight ended when U.S. District Judge Gerald McHugh finalized his ruling February 25 that the site would not violate the so-called crack house provision of the federal Controlled Substances Act, which makes it a crime to operate a site where illegal drugs are produced, distributed, or consumed. McHugh rightly concluded that it wasn't a credible argument that Congress had considered supervised injection sites when it adopted the law in 1986. The ruling doesn't apply to California, but its significance is that a judge has now recognized that provisions of the Controlled Substances Act don't apply to such harm reduction programs.

Two days later, on February 27, in what officials said was a timing coincidence, San Francisco Mayor London Breed and District 6 Supervisor Matt Haney announced that they will introduce legislation this week to establish standards for operating a supervised injection site here. This is a great first step by forward-thinking officials, who are awaiting passage of a state law now pending in the Legislature. Assembly Bill 362, sponsored by lesbian Assemblywoman Susan Talamantes Eggman (D-Stockton) and gay state Senator Scott Wiener (D-San Francisco), would authorize such facilities in the city, although conflicts with federal laws may remain unresolved. The same lawmakers first tried to pass the bill in 2018, but then-governor Jerry Brown vetoed it; last year it was made into a two-year bill after lawmakers referred it to several committees, setting up additional hurdles. Governor Gavin Newsom has indicated that he is likely to sign the new bill.

Supervised injection facilities, also known as overdose prevention programs, allow people to use drugs under the watch of trained staff, reducing the risk of overdose deaths. They provide sterile syringes to prevent transmission of HIV and hepatitis B and C, and offer clients an entry point for obtaining medical care and addiction treatment. Indoor sites also reduce street-based drug use and improper needle disposal, a growing problem in the city. In August 2018, Breed and other officials set up a demonstration model of a supervised injection site; no drugs were consumed by anyone during the weeklong project, which was on display for the public to assess.

At last week's news conference, Haney pointed out that "drug overdose deaths are the most deadly epidemic facing our city." He noted that there were 330 overdose deaths in San Francisco last year, up from 259 in 2018. Lest anyone think that the city doesn't need supervised injection sites, there are 24,500 people who inject drugs in San Francisco, according to the most recent estimates. A news release from the mayor's office stated that many of these individuals do not have access to safe or private environments in which to consume drugs, which often leads to usage in public spaces. While people who use drugs, their friends, and first responders have reversed thousands of opioid overdoses with naloxone in recent years, the overdose deaths have not abated. The arrival of fentanyl, a powerful opioid, has added another contributing factor to these deaths.

City Health Director Dr. Grant Colfax, a gay man whom Breed hired last year, believes that safe consumption sites save lives, as do Breed, Haney, and numerous officials and advocates. A safe environment in an indoor cubicle is a better alternative than shooting up on the street in public view. Dr. Anton Nigusse Bland, the city's director of mental health reform, pointed out that more than 100 evidence-based, peer-reviewed studies indicate that safe consumption sites increase safety for people who inject drugs and reduce the frequency of overdoses.

The new San Francisco legislation is consistent with the recent federal court ruling, it will establish standards for operation of an overdose prevention program and create permitting and regulatory processes managed by the Department of Public Health. While there will likely be some controversy once sites are identified, it's important to keep in mind that these programs have been shown to work elsewhere and will alleviate the problem of street drug use that so many people complain about. It's imperative that city officials present factual information and address concerns and objections in order to enlist community support once the state law is signed, so San Francisco can quickly move to open supervised injection sites where they are needed.