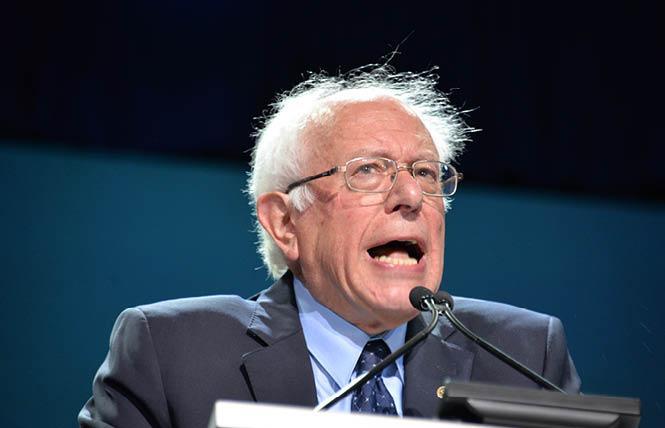 Super Tuesday voting revealed that moderate Democrats across the country seem ready to embrace a strategy of getting behind one candidate to seek the party's nomination for president. It was a strategy that began rolling on Saturday, when billionaire Tom Steyer dropped out after Biden's landslide win in the South Carolina primary. On Sunday gay hopeful Pete Buttigieg ended his campaign.

That was followed on Monday by Senator Amy Klobuchar of Minnesota withdrawing from the race. She and Buttigieg then threw their support to Biden.

California holds the lion's share of delegates — 415 — for the Democratic National Convention, followed by Texas with 228, North Carolina with 110, Virginia with 99, and Massachusetts with 91, giving Biden the lead now on delegates.

The Democratic Party allocates its delegates proportionally, so candidates who garnered 15% or more of the vote in states will get a share of delegates. Other delegates are awarded on a proportional basis depending on outcomes in congressional districts, which also have a 15% threshold. 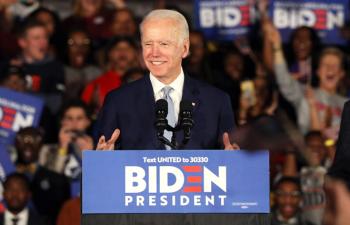 Biden surged from poor performances in Iowa and New Hampshire to the leader of the pack following the South Carolina primary, overtaking Sanders in the delegate count. And Super Tuesday's voting was a blow to Sanders, who had been leading in many polls and was expected to win a perhaps insurmountable lead in the delegate count. Instead, at press time, he trailed Biden.

The final count on who won how many delegates in the Super Tuesday primaries won't be known for several days. In California, mail-in ballots are allowed to be postmarked on Election Day, so returns are still coming in.

Information about the LGBT community — endorsements, donations, and informal polls — suggested nationally, its vote was split between Buttigieg and Warren. In pockets around the country, however, Sanders had wide LGBT support. He won California with about 32% of the vote, indicating appeal among a broad swath of the electorate.

During a visit to Dallas on Monday, Buttigieg told a small crowd prior to a Biden campaign rally that the goal of his campaign had always been "much bigger than me becoming president." Buttigieg praised Biden as bringing back the "politics of decency" and having a record of "delivering" action on some of the most important issues — "taking on the [National Rifle Association], negotiating the Paris Climate Accord, shepherding through the Affordable Care Act."

Biden thanked Buttigieg for his endorsement and paid him "the highest compliment I can give any man or woman."

"He reminds me of my son, Beau," said Biden, who was famously very close to his elder son, a veteran of the war in Iraq and attorney general of Delaware. Beau Biden died of a brain tumor in May 2015, just as his father was considering a run for president. Biden said that, when he looked over at Buttigieg during the debates, he thought to himself, "That's Beau."

Biden said Buttigieg is a "man of enormous integrity," who has "as much moral courage as he does physical courage."

"There are a generation of leaders Pete's age who have unlimited potential. If Pete had been around here another six years ... I would be endorsing Pete."

Later Monday evening, in an interview, CNN's Anderson Cooper asked Biden if he would consider Buttigieg and Klobuchar for roles in a Biden administration.

Speaking about Buttigieg, Biden said he thinks it is "important to bring along a new generation of politicians," and that "there are a lot of things he could do in an administration if I'm the president."

Interestingly, there has been speculation among various political observers that Buttigieg might be a vice presidential choice for Biden and that lesbian Senator Tammy Baldwin (D-Wisconsin) might be such a choice for Sanders.