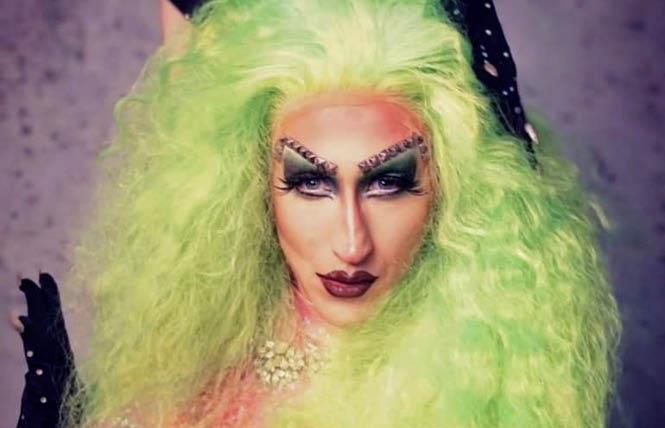 Beginning Saturday, March 7, drag artist Poly Poptart will be presenting Poly Poptart and the Queerios, a weekly drag brunch at The Alice Collective in Oakland.

Poptart is the drag persona of Kyle Prosen, a queer man who is based in Oakland. Prosen spoke to the Bay Area Reporter about the origins of his alter ego.

"Poly Poptart is an Oakland-based queer Jewish drag queen, specializing in stand-up comedy," Prosen said. "She got her name because she's brightly packaged, full of artificial preservatives, and there's a hot cream filling when you put her in your mouth. I also like introducing myself saying 'I'm Poly.' Double entendres are fun!"

Out of drag, Prosen describes himself as "a 28-year-old gay millennial who works for a genetic testing lab focused in women's reproductive health." His husband, Dakarai, is a photographer and artist. They were married at San Francisco City Hall last summer and will have a big wedding this fall, Prosen said.

As a stand-up comic, Poptart has headlined at Oakland's The All Out Comedy Theater and has played the Oakland Comedy Festival. Poptart has also been seen at Mutiny Radio Comedy Festival in San Francisco and will be seen at San Jose Improv in March.

"I am new to stand-up and my approach is evolving," Prosen said. "But you can always depend on traditional stories, perhaps some topical humor, and, of course, my signature drag queen intros. I break up storytelling with drag queen intros, where the intro is the set-up, and the drag name is the punch line. I get a lot of interactive audience assistance."

Poptart is very excited about the launch of the drag brunch. It will be the only weekly drag brunch in the East Bay.

"Drag, premiere drag entertainment, brunch, comedy and friends," Poptart said. "What could be better? The Bay Area has drag artists of such diverse backgrounds, skills, and performance styles, and we will be showcasing live singers, trained dancers, acrobats and stand up comedians. The Queerios is our cast, a nod to the Cheerios from the television show 'Glee.'"

The Queerios will include drag artists Ava LaShay, Venus Soleil, and Scarlet Letters at the inaugural event, though the cast will vary from week to week. There may also be appearances by local political figures, the details of which are still being worked out. Poptart is delighted to have booked The Alice Collective to be the space where the brunch will happen.

"Many days The Alice Collective is a beautiful, spacious, natural light cafe in the heart of downtown Oakland, displaying art from artists around our community," Poptart said. "Many evenings, the space transforms into an event space, hosting all kind of events, including art shows. A venue that has both a daytime and a nighttime persona. Seems like the perfect space to host a drag event, no?"

Madison Kaviyakoen, a queer person who works at the Alice Collective, is producing the drag brunch.

"I travel far just for drag shows," Kaviyakoen, 32, said. "I live and work in Oakland and my community is here and I saw a lacking of drag shows in our community. I work at the Alice Collective and it's a community-minded venue, from artwork on our walls to commissary kitchen. I was lucky that the owner trusted me enough to let me lead and organize something I'm very passionate about."

The Alice Collective is located at 272 14th Street in Oakland. There is no cover charge to attend and people purchase their own food and beverages. Pleasure Principal Events will cater a Southern and Caribbean styled brunch.

"The entertainment will be PG-13, so adults may bring their teenagers," said Poptart. "But note that there will be adult language. We are drag queens, after all."