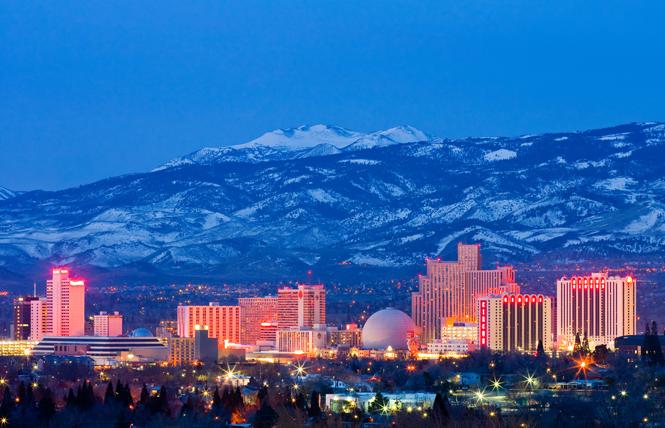 Downtown Reno is lit up at night with the snowcapped Sierra Nevada Mountains in the background. Photo: Andy/Adobe Stock

Reno continues to shake off its Wild West image as it evolves into Nevada's cosmopolitan northern city, but it still has its edgy, small-town feel.

"The Biggest Little City in the World" at the foot of the Sierra Nevada hasn't lost its rockabilly hipster edge or its taste for outdoor adventure. There's plenty of live music, shows, nightclubs, dining, and other entertainment to enjoy after a day of skiing thanks to the city's proximity to Lake Tahoe's ski resorts in the wintertime.

Other times of the year offer hiking, biking, kayaking, and golfing.

All this action makes Reno a year-round destination with a little bit of glam.

"There is a lot to do here that is hiking, biking, trailing, skiing, swimming, and boating," said George Powell-Lopez, 54, a gay man who is the newest director of spa and wellness at The Spa at the Silver Legacy Resort Casino (http://www.silverlegacyreno.com/spa). "For gay couples, it keeps you busy if you do activities together. That's awesome because it keeps it fresh, keeps it different."

The biggest changes happening in Reno are along South Virginia Street. The broad street that heads toward the Peppermill Reno (http://www.peppermillreno.com) is undergoing an $87 million makeover in the city's Midtown district where new trendy bars, restaurants, and stores are opening. The city and residents anticipate more will come following the 18-month project transforming the strip into an entertainment district.

"That's going to be a hotspot for the LGBTQ community," said Powell-Lopez about South Virginia Street. "It has that energy and that feel."

East Fourth Street, not far from The Row (http://www.therowreno.com), is another strip of cool bars and restaurants, such as The Jesse, which opened in June 2019. The boutique hotel has six rooms and features a hip restaurant and bar.

The Silver Legacy (http://www.therowreno.com/silver-legacy) is a part of the rebranded The Row, which encompasses three connected hotels and casinos in the heart of downtown Reno that include Circus Circus Reno and the Eldorado Resort Casino. The hotels merged in 2018, creating the entertainment center now known as The Row.

As big changes continue to shape the city, The Row and the surrounding Riverwalk (http://www.renoriverwalk.org) has taken on some of the same energy as South Virginia Street.

Reno's new vibe is driven by the local LGBT community's investment into its queer scene during the last decade; the University of Nevada, Reno; and the influx of companies, such as Amazon, Panasonic, and Tesla to name a few. The companies and university are attracting new people to Reno seeking employment opportunities and a better quality of life. Reno's new residents come from California, Arizona, Oregon, and other Western states, bringing their tastes, styles, and values with them, transforming the city into a desirable destination for travelers of all types. 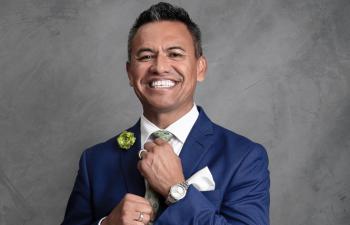 George Powell-Lopez is the director of spa and wellness at The Spa at the Silver Legacy Resort Casino, part of The Row in Reno, Nevada. Photo: The Row

Blissed out
I recently escaped for a weekend to Reno to check out what my friends were telling me was happening since my last visit, but I ended up blissing out at the Silver Legacy's newly renovated spa almost the entire weekend. I enjoyed a relaxing hour and a half massage, meditated in the salt room, and lounged in the dry and wet saunas.

If Powell-Lopez gets his way, The Spa and The Row will be transformed into an LGBT travel destination. The family-owned group of hotels is well-known for its LGBT-friendliness, but he wants to step it up by creating LGBT events at the resort. He also wants to work with local queer events, such as gay ski weekends in Lake Tahoe and Northern Nevada Pride (https://northernnevadapride.org), which takes place July 25, as well as traveling events, like the International Gay and Lesbian Bowling Tournament, which Reno hosted in 2018.

"Eldorado Resorts International is very gay-friendly," Powell-Lopez said, marveling at the resort company's ability to "extend their arms" to his husband of nine years (whom he didn't name to retain his privacy), without any issues.

When I emerged from the spa, I found more than enough to entertain myself within the four blocks that contain the three properties that underwent a $100 million renovation that started after the merger. The Row is a city unto itself featuring 25 restaurants, 22 bars and lounges, and 11 nightclubs, according to a 2018 news release announcing The Row. That doesn't include the theaters and the Eldorado Showroom that hosts thousands of people to see live performances or the more than 4,000 luxury rooms and suites and casino spaces that together are 227,000 square feet with 3,000 slot machines and 125 table games.

What to do
Reno offers much more for LGBT travelers beyond The Row.

It's easy to grab a ski shuttle or drive to the mountains for a day of winter fun. It's a short 30-minute drive to Mount Rose, the closest ski resort, or an hour's drive to many of Lake Tahoe's top ski destinations.

"The beauty and the nature that is around here is absolutely stunning," said Powell-Lopez, who has wild mustangs feeding off the crab apple trees on his property and drinking water out of the fountain the couple built at their house. "I've been all over the world and for it to take my breath away at every turn ... it is just stunning."

An added bonus to The Row are the restaurants and bars along the Riverwalk, including one of Reno's well-established gay bars, the 5 Star Saloon (http://5starsaloon.com). The bar is just around the corner from The Row.

Other gay hotspots around town include Splash Bar Reno (http://www.splashreno.com) and Carl's (http://www.carlsthesaloon.com), which is within walking distance of the Peppermill.

Where to eat
There are plenty of selections for eating at The Row from high-end, like the notable La Strada (http://www.eldoradoreno.com/venue/restaurants/la-strada), to fast food and chain restaurants. I dined at the classic La Strada, where its signature mushroom ravioli can be ordered as an appetizer or main course. The raviolis are amazing, but this time I decided to explore the menu. I started with the Fried Artichokes "Alla Romana," which were delicious dipped into the lemon aioli, and selected the Tortellini panna prosciutto and piselli. I enjoyed the dishes with a glass of the Ripasso, Giuseppe Lonardi, Valpolicella Superiore wine.

Outside of The Row and the Riverwalk, one of the favorite special nights out for my girlfriend and I is at 4th Street Bistro (http://4thstbistro.com), but we also like going to Bricks Restaurant (http://bricksrestaurant.com), Lulou's (https://www.facebook.com/pages/Lulous-Restaurant/120538954629064), Campo (http://camporeno.com), and the Wild River Grill (http://www.wildrivergrille.com), to name a few whenever we are in Reno.

Where to stay
There are two places we usually stay in Reno depending on our mood. If we want to walk around and explore downtown Reno, we choose to get a room at Eldorado or Silver Legacy. If we want a full-on resort experience, we head to the Peppermill, which means we have to drive to get anywhere else in Reno.

How to get there
The most popular way to get to Reno is to drive. It's about four hours from the Bay Area up Interstate 80 to old U.S. 395 to Reno.

Amtrak (http://www.amtrakvacations.com/destination/reno-nv/) provides a comfortable seven-hour scenic ride through the Sierra to Reno.

The Flix bus (http://www.flixbus.com) takes between four and five hours, depending on traffic and weather conditions.

Multiple flights aboard any one of the major airlines are available from any of the Bay Area airports to the Reno-Tahoe Airport daily. The flight takes just over an hour.