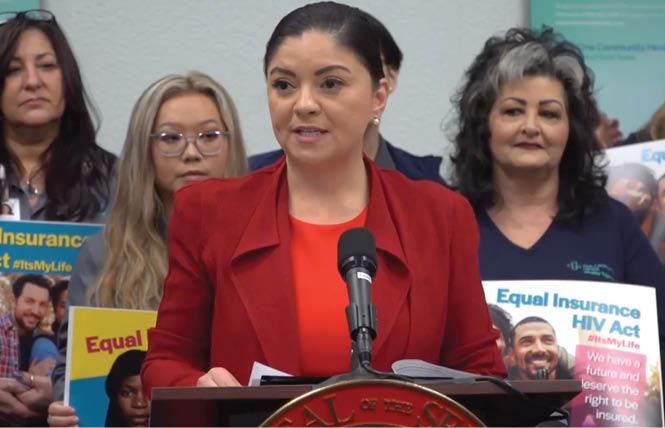 Gonzalez discussed her bill, the Equal Insurance HIV Act, at a news conference February 11 at the midtown Sacramento location of One Community Health, formerly known as the Center for AIDS Research, Education and Services, or CARES, located in that city's LGBT Lavender Heights neighborhood. (The bill has not yet been assigned a number.)

"It will require insurance companies treat HIV like any other chronic condition, not as a death sentence," Gonzalez said of her bill.

Insurance Commissioner Ricardo Lara, the first and so far only openly gay statewide elected official in California, said he was "shocked" to learn that people with HIV face discrimination in life and disability insurances.

"Thirty years ago, medical science had not figured out how to treat HIV," Lara said. "Even though attitudes are improving, insurance law is still stuck in the 1980s."

Lara explained that people with HIV, who are able to live lives similar in length to non-infected peers due to antiretroviral medicines first introduced in the mid-1990s, need the safety and security for their families that life insurance provides.

"People living with HIV are seeing children grow up, just like everyone else," Lara said.

Lara said that the effect of allowing insurance companies to discriminate on the basis of HIV status disproportionately affects minorities, women, and children.

Dr. Tasnim Khan, the chief medical officer of One Community Health, said, "It's past time for the insurance industry to get beyond" the era when "a doctor wouldn't want to touch someone with HIV."

"The current law is so antiquated it even references an outdated HIV test, the ELSA test, which is no longer in use," Kahn said.

Both state law and the federal Affordable Care Act prevent denial of health insurance on the basis of HIV status.

Rick Zbur, a gay man who is the executive director of Equality California, the statewide LGBT rights group, said that there is a huge difference between today and the world he grew up in.

"As someone who lived through the HIV crisis in the 1980s, someone who saw classmates, peers, and friends die before it was their time, I know as well as anyone that HIV was a death sentence," Zbur said. "Nobody living with HIV should fear treatment because they may not be able to access the insurance they need."