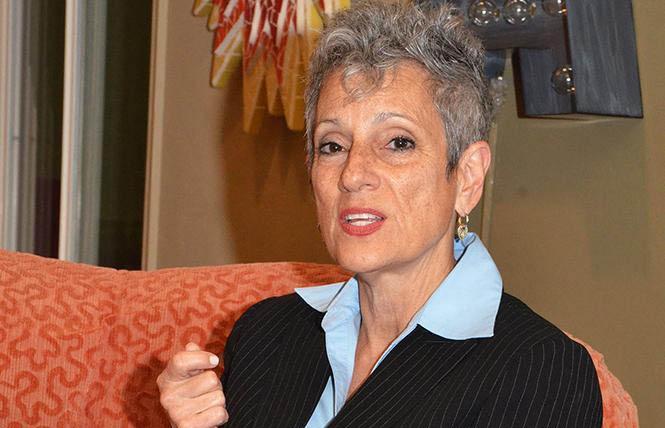 Equality California has dual endorsed a lesbian candidate seeking an open Palm Springs state Senate seat and another female Democrat in the race, while it has snubbed a gay candidate in a crowded Orange County Assembly race.

The statewide LGBT advocacy organization announced Thursday that it was supporting both aging policy expert Joy Silver and education official Elizabeth Romero in the contest to represent the 28th Senate District, which includes the Coachella Valley cities that are a major draw for LGBT retirees and vacationers. Should Silver win she would be the first out LGBT state senator from Riverside County; she came close to winning the seat in 2018 and since then has been focused on affordable housing issues.

"Voters in Senate District 28 have two great choices in Elizabeth Romero and Joy Silver. We're confident that both of them would be exceptional advocates for the LGBTQ+ community and our allies in the California Senate," stated EQCA Executive Director Rick Zbur.

The seat became vacant last year when former state Senator Jeff Stone (R-La Quinta) resigned to take a job with the Trump administration as the western regional director in the Department of Labor. A special election to fill the seat was combined with the March 3 primary.

If none of the five candidates in the race captures more than 50% of the vote, then the top two vote-getters regardless of party will face-off May 12. It is widely expected that Assemblywoman Melissa Melendez (R-Lake Elsinore) will advance to the runoff if she fails to win the seat outright in March. Fellow Republican John Schwab, a small business owner, is also running.

Democratic leaders had hoped to convince just one person from their party to run in order to give them better odds of winning the seat next month but were unsuccessful in their attempt to clear the field for a lone candidate. Silver secured the state Democratic Party's endorsement in the race, giving her a leg up over Romero, who serves on the Riverside County Board of Education, in advancing to the runoff. The other Democrat on the ballot is nurse Anna Nevenic.

In a press release Thursday touting that she had now received 40 major endorsements for her campaign, Silver noted she has drawn support from labor unions, various LGBTQ groups, and leaders across the Senate district.

"The breadth of support for this campaign is inspiring, and demonstrates the conviction that we can bring the message, resources, and the coalition needed to win and finally bring real change to our region," stated Silver.

Orange County Assembly race
In the Assembly District 72 seat where incumbent Assemblyman Tyler Diep (R-Westminster) is facing a strong challenge from a fellow GOPer and two Democrats, EQCA solely endorsed Democratic Garden Grove City Councilwoman Diedre Thu-Ha Nguyen. She was one of several straight Assembly candidates picking up EQCA's endorsement Thursday who Zbur said "are exactly the type of pro-equality champions that voters deserve fighting for them in Sacramento."

Unlike in the Senate race, EQCA's political action committee opted not to split its support in the 72nd Assembly District race by also endorsing lawyer Bijan Mohseni. A political newcomer, he is one of two gay men seeking to be the first out legislators elected from Orange County. Mohseni, who lives in Los Alamitos, would also be the first LGBT legislator of Iranian descent in the state.

A source told the Bay Area Reporter that EQCA opted not to dual endorse in the contest because Mohseni has not demonstrated he would have the financial resources to compete for the seat should he survive the primary, where the top two vote-getters regardless of party affiliation will advance to the November ballot.

Mohseni told the B.A.R. he was "incredibly disappointed" by EQCA's decision since it is "an organization with a self-professed mission of 'bring[ing] the voices of LGBTQ people . . . to institutions of power in California.' They endorsed a candidate who has no record of advancing LGBTQ+ rights in her own community and who has yet to take any public stances on policy issues, including those affecting LGBTQ+ people."

He added that he remains "proud of my record and commitment to defending LGBTQ+ rights which includes helping represent EQCA against Donald Trump in the United States Supreme Court. I'm focused on winning this primary and the general, and being the first in Orange County to bring the voices of LGBTQ+ people to institutions of power in California."

EQCA is backing gay Mission Viejo businessman Scott Rhinehart in his bid for the adjacent 73rd Assembly District, as it early endorsed him last year. When Rhinehart first ran in 2018 against the incumbent, Assemblyman William Brough (R-Dana Point), he received EQCA's endorsement late in the campaign. This time Brough stands accused of inappropriate behavior by four women and is being challenged by two Republican opponents and another Democrat in addition to Rhinehart.

While EQCA aims to elect LGBT candidates to the state Legislature, merely being a member of the LGBT community does not ensure a candidate will receive its endorsement. The PAC weighs a number of factors in determining whom to support, ranging from if the person is a first-time candidate with little name recognition, running against an incumbent or other elected officials for an open seat, and has demonstrated an ability to raise money, in addition to where they stand on myriad issues.

EQCA also has a policy of granting pro-forma endorsements to state lawmakers seeking reelection who earned 100% scores on EQCA's two most recent legislative scorecards. Thus, gay Filipino 53rd Assembly District candidate Godfrey Santos Plata, an educator who would be the first out immigrant elected to the Legislature, was unable to secure EQCA's endorsement as he is running against Assemblyman Miguel Santiago (D-Los Angeles), whose perfect scores on EQCA's scorecards in 2018 and 2019 earned him the group's sole support as he seeks reelection this year.

Of the 21 LGBT candidates known to be running for state legislative seats this year, EQCA has so far endorsed 11, all Democrats. Last month, it endorsed lesbian businesswoman and senior advocate Jackie Smith, who for a second time is aiming to unseat Assemblyman Kevin Kiley (R-Granite Bay) from his 6th Assembly District seat. The former San Jose resident fell short in 2018.

The outcome of the races will determine if the ranks of the Legislative LGBTQ Caucus will increase come December when the winners of the November contests are sworn into office. The affinity group for LGBTQ legislators stands at seven members, with two leaving the statehouse later this year. Lesbian Senator Cathleen Galgiani (D-Stockton) is termed out of office, and gay Assemblyman Todd Gloria (D-San Diego) is running to be mayor of his city rather than seek reelection.

EQCA's full endorsement list for the 2020 races can be found here.

Due to the Presidents Day holiday, the Political Notes column will return Monday, February 24.

UPDATED 1/6/2020 with comments from candidates Joy Silver and Bijan Mohseni.