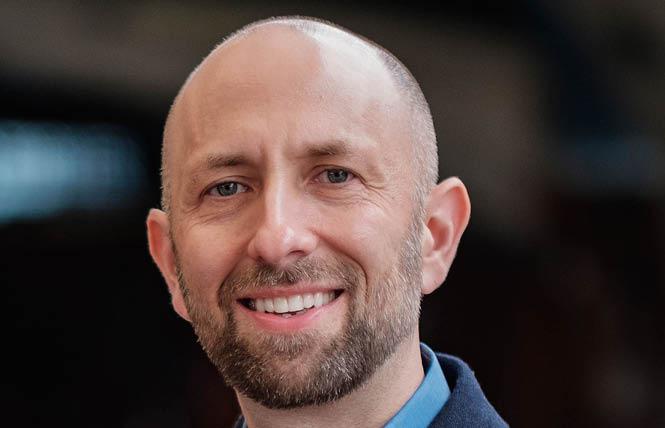 As he seeks to double LGBT representation on the San Francisco Board of Supervisors, gay former journalist Joel Engardio has already raised more money for his campaign for the open District 7 seat than during his 2016 bid to represent the neighborhoods west of Twin Peaks.

He also announced this week that newly sworn in San Francisco Sheriff Paul Miyamoto had endorsed his candidacy. Already backing Engardio in the race are Assessor-Recorder Carmen Chu and former supervisors Scott Wiener, a gay man who now serves in the state Senate, and Katy Tang, who now lives in District 7.

"I feel great and I feel confident about the campaign with our strong early start," Engardio, a copywriter and senior manager for content marketing at Firebrand Communications, told the Bay Area Reporter. "We are already doing our field campaign and passing out our first flier on residents' doors with volunteers. We are as busy now as you would expect to be in late summer."

Engardio, who owns a home near Lake Merced with his husband, Lionel Hsu, is the first candidate running in District 7 to report on their fundraising to date. He purposefully launched his campaign last fall in order to build momentum and kickoff 2020 with an impressive fundraising report as the race for the seat is expected to be a crowded field.

District 7 Supervisor Norman Yee, currently president of the board, is barred from running again due to term limits. It means, for the first time in eight years, there isn't an incumbent candidate in the race, which is expected to see many candidates.

"It is important to come out of the gate strong and let people know we are here to win," said Engardio.

He twice lost to Yee and is now hoping the seeds he planted during those past campaigns will give him an edge in the November 3 election. Should he win, he would be the first LGBT person to represent District 7 at City Hall.

Currently, the lone LGBT member of the board is gay District 8 Supervisor Rafael Mandelman. Also seeking to join the board this year is gay startup executive Spencer Simonsen, who is mounting an underdog campaign against District 3 Supervisor Aaron Peskin, who has long represented North Beach, Chinatown, Polk Gulch, and other neighborhoods in the northern section of the city.

It remains to be seen if any of the other odd-numbered supervisor district contests on the November ballot will draw LGBT candidates. The filing deadline for supervisor candidates is June 9.

As for the District 7 race, Myrna Melgar last Friday resigned from her seat on the city's planning commission after officially filing to run for the seat that day and in June plans to step down as executive director of the Jamestown Community Center in order to focus on her campaign.

When she was a teenager Melgar emigrated from El Salvador in the 1980s with her family to San Francisco. She and her husband have lived in the District 7 neighborhood of Ingleside Terrace since 2011.

They have three daughters, one of whom is at college and came out as a lesbian last year. Their oldest works for the Public Utilities Commission and their youngest is in elementary school.

Asked what her pitch to her LGBT neighbors would be as for why she should be their supervisor, Melgar replied, "I am a bridge builder."

She added, "I am so happy Joel is running. I think representation and diversity is very important. Whichever one of us makes it, it will be a plus for San Francisco to have that kind of diversity represented on the Board of Supervisors."

Melgar told the B.A.R. Tuesday that Yee has endorsed her, as have Supervisors Peskin, Mandelman, Sandra Lee Fewer, and Gordon Mar. His twin brother and former supervisor, Eric Mar, is also supporting Melgar, who had worked for him as a legislative aide at City Hall.

Mandelman told the B.A.R., "Myrna is a good friend and an accomplished public servant. She will be a great supervisor."

In late March or early April Melgar plans to officially kickoff her campaign. So too does tech investor Ben Matranga, who is running for a second time, having fallen short in 2016. Matranga, a managing partner at Connectivity Capital, and his wife live in West Portal and have an infant daughter.

Patrick McGuire, who owns the Java Beach cafe near Ocean Beach, also pulled papers for the race, as did firefighter Stephen Martin-Pinto and Karim Salgado.

Community college board member Ivy Lee, an aide to Yee whom he had urged to run to succeed him, opted against running for the seat, as Mission Local first reported last month. Deputy Public Defender Vilaska Nguyen, who also performs as a standup comic, is reportedly looking at running for the seat, though he did not respond to a request for comment by the B.A.R.'s press deadline Wednesday.

SF oversight panels elect out chairs
A number of high-profile oversight panels in San Francisco have LGBT chairs or presidents this year. Both of the city's elected education boards have out leaders, as do a number of commissions whose appointed members keep watch over city departments.

Mark Sanchez, the lone LGBT member of the San Francisco Board of Education, was elected its president last month and is now confronted with addressing a $31.8 million budget shortfall that took the San Francisco Unified School District by surprise, as the San Francisco Chronicle recently reported. Reelected to the school board in 2016, as he had served on it in the 2000s, including two years as president, Sanchez is up for re-election to another four-year term this November.

In mid-January gay community college board member Alex Randolph handed the president's gavel over to bisexual board member Shanell Williams. Remaining as vice president of the San Francisco City College Board of Trustees is gay board member Tom Temprano. All three of the out trustees are up for reelection in the fall.

Like the school board, the college board continues to grapple with its own budget issues that had led to class cuts and staff layoffs, as well as a fight at City Hall over an emergency infusion of taxpayer funds to restore several hundred courses that had been cut. The college district is also asking city voters to pass an $845 million bond on the March 3 primary ballot that would go toward modernizing its buildings.

Elected president of the city's Health Commission this year is Dan Bernal, a gay man who is House Speaker Nancy Pelosi's local chief of staff. He had served as the oversight panel's vice chair last year.

Two queer men of color are now overseeing the city's Human Rights Commission. James Loduca, a senior director of diversity, equity and inclusion at Twitter, has succeeded Susan Belinda Christian, a lesbian assistant district attorney, as its chair. Serving as vice chair is Joseph Sweiss, the founder and president of the Arab American Democratic Club who left law school and now works on policy and public affairs at the city's Department of the Environment.

In December the War Memorial Board of Trustees elected Thomas E. Horn, a gay man and the B.A.R.'s former publisher, as its president for 2020.

They were elected to their leadership posts at the countywide transit oversight panel's meeting last month. The commission sets priorities for transportation projects throughout the sprawling East Bay county and oversees the spending of transit funding measures approved by voters, such as 2014's Measure BB that is expected to provide nearly $8 billion over 30 years from a 1% sales tax.

"Thanks to the voter-approved Measure BB, we are able to leverage those local dollars to support multimodal transportation infrastructure in Alameda County, including to improve mobility and safety for bicyclists and pedestrians, and enhance and support transit service, while also providing programs to our youth and seniors to make the county more livable and affordable," stated Bauters.

Bauters chairs his commission's policy committee, which will be taking up Chiu's bill, known as the Bay Area Seamless Transit Act. He told the B.A.R. it likely would review the legislation sometime in March.

"I support Assemblymember Chiu in his legislative effort to help deliver a seamless, integrated regional transit system. I understand that the bill is currently considering amendments to further refine that vision," stated Bauters. "As vice chair of the Alameda County Transportation Commission, I look forward to reviewing his proposal closely with my fellow commissioners to provide support and input that ensures we achieve greater access and equity for everyone."

Correction
Last week's column misstated the hometown of Ross LaJeunesse, the gay former San Francisco resident running for a Maine U.S. Senate seat. It is Biddeford, Maine. The online version has been corrected.

UPDATED 1/6/2020 to clarify that Human Rights Commissioner Joseph Sweiss left law school and now works for the city and that Myrna Melgar would be the first Latina elected to the Board of Supervisors since 1994.