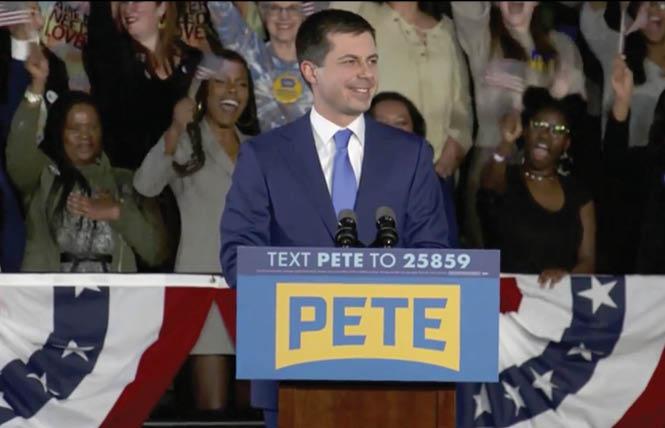 Gay Democratic presidential candidate Pete Buttigieg and Senator Bernie Sanders appear to be leading in the Iowa caucuses, after state Democratic Party officials released 62% of the results across all 99 counties Tuesday, following a snafu Monday night that left candidates and observers scrambling and in the dark.

No results were announced Monday night due to what state party officials characterized as "irregularities" with a new app that was designed for precinct workers to transmit caucus figures to officials.

In another set of numbers, the "final alignment" totals, Sanders, the independent senator from Vermont, received 26.3%, followed closely by Buttigieg, the former South Bend, Indiana mayor, who came in second with 25.1%.

In third place was Senator Elizabeth Warren of Massachusetts, who garnered 20.7%.

It was not a good night for Biden, who received 13.2% of the final alignment caucus vote, and Klobuchar, who garnered 12.4%, according to the initial numbers.

Those totals could change as the complete caucus results are announced.

Candidates had to reach 15% in each precinct to be considered "viable." The state results are later used by Iowa Democratic officials to allocate delegates to the state convention. The percentages released Tuesday are based on the final allocation of caucus voters.

Buttigieg told reporters Tuesday morning that his declaration was based on his campaign's "internal numbers." But news coverage by major broadcast and cable media outlets throughout the night seemed to support a conclusion that Buttigieg did very well, perhaps even a second place finish.

"Pete has shattered expectations for his candidacy throughout the campaign, and he will continue to do so in the primary states ahead," Annise Parker, president of the LGBTQ Victory Fund, which endorsed Buttigieg last July, stated in a release February 3. "Tonight's strong showing provides the publicity and momentum he needs to head into New Hampshire. The many undecided voters who are out there will take a first look, or another look, at Pete, and they will like what they see."

At most caucus sites covered by CNN, MSNBC, and others, Buttigieg supporters consistently had large turnouts, with crowds that appeared to approximate those of Iowa frontrunner Sanders. Supporters of Warren occasionally fell short of the numbers needed to advance, and the turnout for Biden seemed frequently well short of the "viable" 15% required to secure state delegates.

Caucus officials were supposed to download a phone app and report the data to the state party office. But the app reportedly failed and a back-up plan — to phone in results — left captains on hold for hours. Eventually, the state party issued a statement saying it was seeing "inconsistencies" in the results reported and that the data would not be released publicly until it was confident of the results.

As the failure to report the results dragged on, it unleashed a firestorm of criticism of the state party, the caucus process, and even Iowa's status as the first-in-nation voting state. The Iowa party said it did establish a paper trail that will ultimately provide a reliable count but gave no indication of when that might be.

"We know by the time it's all said and done, Iowa, you have shocked the nation, because by all indications, we are going on to NH victorious," he said, referring to New Hampshire, which holds its primary February 11.

Sanders was more cautious, saying that, "when those results are announced, I have a good feeling we're going to be doing very, very well here in Iowa."

The Warren campaign told reporters in Iowa that the campaign's data is showing a "tight race" between Sanders, Warren, and Buttigieg.

There have been at least two attempts to quantify LGBT support for Buttigieg and other Democratic presidential candidates, with no consistency.

Equality California announced January 30 that it is endorsing Buttigieg. The group is the largest statewide LGBT political organization in the nation. In a joint statement its Nevada affiliate, Silver State Equality, the groups said Buttigieg has the "boldest, most comprehensive agenda to achieve full, lived equality for all LGBTQ people of any presidential candidate in the nation's history."

The groups said that, while they were "impressed" with Warren and businessman Tom Steyer, they felt "Mayor Pete is the best candidate to take on Donald Trump, win back the White House and help lead the fight to create a world that is healthy, just and fully equal for all LGBTQ people."

The groups emphasized that they did not endorse Buttigieg "simply because he's gay" but that they feel his candidacy "has already had a transformational impact on the LGBTQ community."

In his post-caucus rally speech late Monday night, Buttigieg thanked his mother, his late father, and "the love of my life," husband, Chasten Buttigieg. When he asked the crowd to give a hand "for the future first gentleman of the United States," the crowded room cheered wildly.