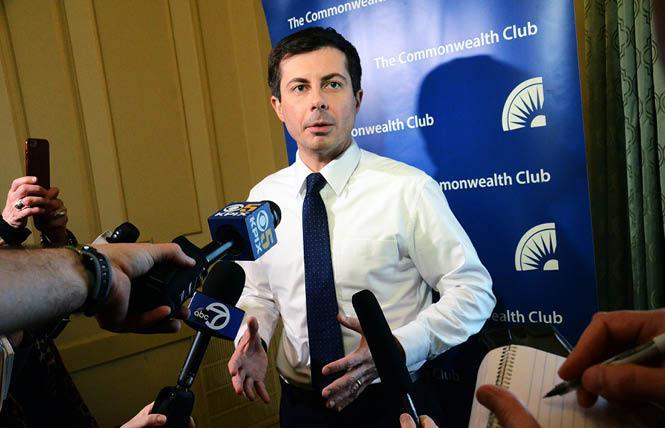 Equality California and its Nevada-based affiliate Silver State Equality both endorsed Buttigieg, the first openly gay candidate for the Democratic Party's presidential nomination. The announcement comes just days prior to the Iowa caucuses Monday, February 3, and the February 11 New Hampshire primary. In both states polling has Buttigieg among the top tier of candidates at either second or third place.

The decision was reached unanimously by the LGBT statewide groups' joint presidential endorsement committee following a lengthy process that included a detailed questionnaire, thorough evaluation of the candidates' viability and policy positions, staff engagement, and interviews with the candidates, according to a news release.

It noted that for the first time, California's primary will be held on Super Tuesday in March, and California voters will begin casting mail-in ballots on Monday, February 3, the same day as the Iowa Caucus. The 2020 Nevada Caucus will be held Saturday, February 22.

"In our twenty-one-year history, we have endorsed hundreds of openly LGBTQ candidates, but never for president of the United States. That changes today," stated Equality California Executive Director Rick Zbur.

Buttigieg noted how "honored" he was to be endorsed by the two LGBT groups in his own statement.

"My campaign is based around a shared future of belonging for all Americans, no matter their sexual orientation or gender identity," he stated. "President Trump's attacks on the LGBTQ+ community, especially our trans members, have shown us that the fight for equal rights did not end with marriage equality. I will be the president to continue that fight for equality for all Americans."

The endorsement had been somewhat expected, as LGBT leaders in December had told the B.A.R. they wouldn't be surprised to see Buttigieg earn EQCA's sole endorsement in the race after U.S. Senator Kamala Harris of California suspended her presidential bid. For months speculation had run rampant that the longtime politician in the Golden State was a shoo-in to earn EQCA's endorsement due to her strong ties to the group and lengthy record of supporting LGBT rights.

Some had also suggested U.S. Senator Elizabeth Warren of Massachusetts could emerge with EQCA's backing, as various LGBT leaders in the state in recent weeks who had been backing Harris announced they are now supporting Warren's bid for the White House.

Seven of the Democrats seeking their party's presidential nomination turned in EQCA's questionnaire and were thus eligible to be considered for its endorsement. In addition to Buttigieg and Warren, they included former Vice President Joseph R. Biden Jr.; U.S. Senator Bernie Sanders, an independent from Vermont; former New York City Mayor Michael Bloomberg; tech investor Andrew Yang; and Tom Steyer, a California billionaire who has long called for Trump to be impeached.

But in its endorsement announcement Thursday, Zbur noted that it was Buttigieg who rose to the top among the candidates it interviewed due to his myriad policy stances on various issues of importance to the LGBT community.

"From his comprehensive plan to end the HIV epidemic by 2030 to his commitment to make our schools safe and supportive for LGBTQ students to his specific funding and policy priorities to protect and empower the transgender community —?especially transgender women of color, who face an epidemic of violence and persecution — Mayor Pete Buttigieg has the boldest, most comprehensive agenda to achieve full, lived equality for all LGBTQ people of any presidential candidate in the nation's history," stated Zbur.

While EQCA is a nonpartisan political group, and has endorsed a handful of Republican candidates seeking office in California, it had been clear for some time that it would be supporting one of the Democrats seeking the White House in 2020. It has been a vocal opponent of Republican President Donald Trump and his administration's systematic rollback of LGBT protections and rights since 2017. Last month, EQCA had called for the House of Representatives to impeach Trump, which it did, and the Senate to remove him from office, which it is not expected to do.

In its endorsement of Buttigieg, EQCA and Silver Equality Nevada both pledged to support whomever the Democratic presidential nominee is this fall.

"This will be the most important election in our lifetimes — and the stakes couldn't be higher. Donald Trump and Mike Pence have spent every day of the last three years attacking LGBTQ people and the diverse communities to which we belong: immigrant communities, communities of color, the transgender community, women and religious minorities," stated Zbur. "Mayor Pete is the best candidate to take on Donald Trump, win back the White House and help lead the fight to create a world that is healthy, just and fully equal for all LGBTQ people."

Zbur did note that the endorsement of Buttigieg by the two groups was not based on his being gay, though he acknowledged "the historic nature of his candidacy has already had a transformational impact on the LGBTQ community. Electing the first openly LGBTQ president will send a message to millions of LGBTQ youth across the country that no dreams are too big and no leadership position is too high."