Editorial: Be counted in the 2020 census 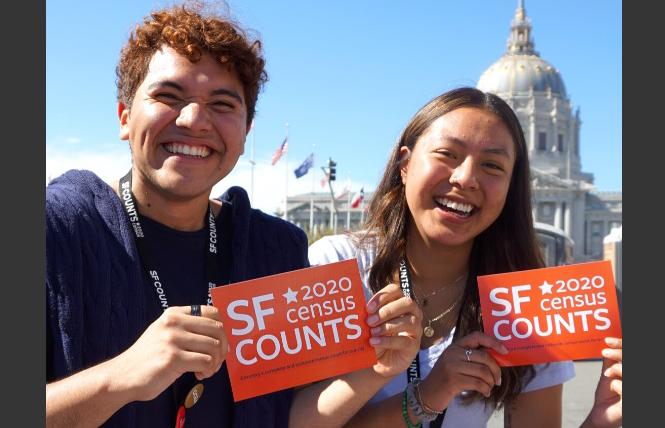 The 2020 census will soon get underway, and it's critical that every LGBTQ person participate.

There has been much angst around this year's decennial count of U.S. residents since Republicans have attempted to manipulate an undercount by discouraging participation among groups that favor Democrats. The census requires that all U.S. residents be counted, both citizens and non-citizens. The Trump administration's effort last year to include a citizenship question (it won't) on the census form sowed confusion and distrust of the federal government, threatening to significantly depress turnout of Latinos and other immigrants, especially in states like California. The state is spending hundreds of millions of dollars to encourage people to be counted, including outreach to the LGBTQ community. And make no mistake, there are billions of dollars at stake. Not only used to allocate House seats to the states, census results also determine funding for myriad social services, from food stamps and Medicaid to Section 8 housing vouchers and community health centers. For the first time in the state's history California could lose a House seat in Congress because the state's population is no longer growing as fast as several Western and Southern states that are expected to add House seats next year.

As we've reported, while the census form will not include data on sexual orientation and gender identity, it is still very important that every LGBTQ person is counted. Ever since Donald Trump became president, he and his cronies have systematically sought to undermine rights and protections for LGBTQ people. This includes the ban on trans people serving openly in the military and drastically scaling back civil rights enforcement for LGBTQ students. Last November, ProPublica, a nonprofit newsroom that investigates abuses of power, published an article detailing 31 examples of this administration's efforts to undermine recent gains for the queer community. Trans leaders and community members started using the hashtag #WontBeErased to bring attention to the matter.

To counter the administration's efforts, advocacy groups urging LGBTQs to complete census forms are using the hashtag #WillBeCounted. As part of that effort, last week Equality California Institute, which advocates for LGBTQs in California, unveiled a pledge campaign on its website, www.eqca.org, to encourage us to stand up and say that we won't be erased, that the federal government will recognize us through our participation in the census. "The 2020 census is nothing less than a fight for our future — a future that values diversity and invests in the communities that need it most," stated EQCA Executive Director Rick Zbur. "Too often, California's diverse LGBTQ community is undercounted — which denies us power, representation, and funding for programs that the most vulnerable members of our community need to survive. There's far too much at stake to allow that to happen in 2020. LGBTQ Californians will be counted."

Importantly, trans and nonbinary people can complete this year's census using their preferred names, whether or not they have been legally changed. Additionally, while the only gender options on the form will be male or female, people can check whichever box they identify with. Census officials have stated that forms won't be invalidated if this question is skipped. So, while it's an imperfect system, this flexibility is easing concerns among trans and gender-nonconforming people, an East Bay census committee member told us this week. The U.S. Census Bureau also does not verify names with other data sources. All of which is to say that while we wish the 2020 census was more detailed to accurately reflect the reality of people's lives, and listed lesbian, gay, bisexual, and transgender as ways for people to identify, it will at least provide information on same-sex relationships. For the first time, it will have the options "same-sex husband/wife/spouse" or "same-sex unmarried partner."

People can complete census forms online starting March 12. Alternatively, people can mail in the forms they will be receiving by April 15. (Don't do both.) We encourage LGBTQ people to take an active role because it is only by being counted that we will truly receive our fair share of federal funding that state and local governments rely on for numerous programs. In states like California, which pay more in taxes to the federal government than it receives, an accurate count is crucial. Pledge to be counted this year, and then make sure to do it.