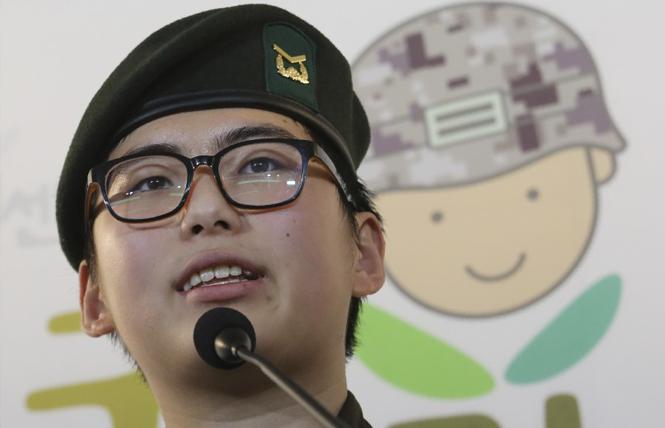 A South Korean transgender woman's dreams of a military career were dashed by a panel of officers that recently discharged her following sex reassignment surgery for having a "mental and physical disability."

The panel of army officials met with Byun Hui-su, a 22-year-old staff sergeant, and her lawyer for an hour during an evening hearing January 21.

The next day, Byun's service was terminated immediately. It was an unusual move against military protocol, Lim Tae-hoon from the Center for Military Human Rights, told the BBC.

The panel added in its statement about the decision that the military was determined to avoid "unfair discrimination and treatment," reported the BBC.

Byun vowed to appeal the decision during a 45-minute news conference with her lawyer following the ruling.

"I will continue to fight until the day I can remain to serve in the army," she told reporters. "I'll challenge the decision until the end, to the Supreme Court."

LGBT in the military
South Korea's military doesn't have any regulations covering transgender service members or for individuals who undergo gender reassignment surgery during active duty.

The military only has regulations for gay soldiers. They are banned from sexual contact. If caught having sex, they face up to two years in prison under Article 92-6 of the Army Criminal Act, reported the New York Times.

Homosexuality isn't illegal for civilians in South Korea, but many live under the radar. Transgender individuals are legally recognized following sex reassignment surgery.

The East Asian country maintains a conservative outlook when it comes to sexual orientation and gender identity.

Byun was dismissed under a policy that recognizes the removal of genitals as a disability necessitating discharge, reported the Bozeman Daily Chronicle. In 2006, a female lieutenant colonel was discharged under the policy following a mastectomy after she was diagnosed with cancer in one breast. The lieutenant successfully challenged her dismissal.

Byun dreamed of a career in South Korea's military since she was young. Upon her own initiative she attended a high school for future military officers.

She voluntarily enlisted in South Korea's army as a male officer in 2017.

She tried to resist her feelings of wanting to be a woman, but she became severely depressed. That changed once she received hormone treatment and came out last year to her superior officers and unit, which supported her.

In November, she received surgery in Thailand.

Being open about who she is allowed Byun to excel in her role as a tank operator. She began to receive high marks and earned awards.

Byun didn't expect her transition to interfere with her serving in the army or her future career with South Korea's military, she told reporters.

South Korea has 600,000 troops serving in the military. An estimated 464,000 of those troops are enlisted in the army. It's unknown how many soldiers are transgender, reported the Chronicle.

The Department of Defense statistics cited by the Palm Center states there are 8,980 active transgender service members in the U.S. military, reported the Chronicle. The issue is being fought in the courts.

Fighting back
Byun's not the only one fighting to serve in South Korea.

"I am more than qualified and effectively completed my duty," Edhi Park told Amnesty International, according to a 2019 report, reported the Chronicle.

Several transgender women have been prosecuted by South Korea's military. The military accused them of evading military service because of their gender identity.

Four gay soldiers are alleging discrimination and challenging their discipline and prosecution under the military's anti-sodomy law before South Korea's supreme court.

Byun is optimistic that change is coming.

"I'm hoping all sexual minorities in the changing military, including myself, can carry out our duty and vocation without discrimination," Byun told the Chronicle. "I would like to be a great precedent. I'm a mere individual, but I'd like to be a part of this change."

The agreement comes after a decade-long battle over same-sex adoption between the two nations.

The deal was signed ahead of Russian President Vladimir Putin attending the Fifth World Holocaust Forum in Israel January 23, reported the Jerusalem Post.

Nitzan Horowitz, chairman of Meretz, an LGBT organization, told the Post it is "a spit in the face of the LGBT community ... [President Benjamin] Netanyahu is getting in line with Putin's homophobic policies and once again trampling the basic rights of hundreds of thousands of citizens of Israel who are members of the gay community."