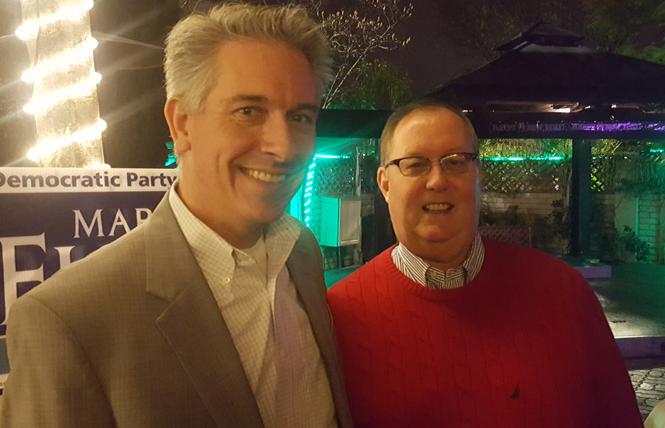 The race for an Alameda County Superior Court seat is heating up, with the two out candidates each securing major endorsements in recent weeks.

Mark Fickes, a gay man running for the open judgeship, held a campaign event Friday, January 24, at the gay-owned World Famous Turf Club in Hayward. A few dozen supporters were on hand as he talked about his qualifications and his backing by the Alameda County Democratic Party.

The race is on the March 3 primary ballot. If no candidate reaches 50%-plus one, the two top vote-getters will face each other in November.

During his remarks, Fickes talked about the civil rights aspects of his work; he is currently a partner in Cannata, O'Toole, Fickes, and Olson, a small San Francisco law firm. He said that he represents people wronged by the government. Yet he has also taken on business clients, he told the audience, so that he can devote time to those other types of cases involving civil rights or workers' rights. He said that his firm offers a competitive salary and benefits package.

Campaigning throughout the county is a bit like speed-dating, Fickes joked in his remarks, in that candidates usually only have a few minutes to make their case before political clubs and other groups.

"The coolest thing about the campaign are the warm and friendly people in Alameda County," he told the B.A.R.

In terms of diversity on the bench, Fickes pointed out that Alameda County has only one out gay man serving as a judge, and that none have been elected. (Most judges are appointed by the governor.)

"We need judges with broader experience," he said.

Sara Lamnin, a Hayward City Council member, told the B.A.R. that she's endorsed Fickes because of his standing up for equal rights. An ally, Lamnin appreciated Fickes coming to Hayward, an area "that often gets overlooked."

Lori Reisfelt said that her neighbors invited her to the event. After listening to Fickes, she pointed to his broad experience and said that's important for a judge.

Larry Gray, a gay man who's owned the Turf Club for 35 years, said he welcomes candidates to his establishment. The Turf Club, he said, "is not a gay bar but a gay-owned bar" that has always had a diverse customer base.

"We represent the community," he said.

"I think Mark has very good experience," Dowling said. "It's amazing that there's never been an out gay man elected judge in Alameda County."

Fickes has represented both plaintiffs and defendants in criminal and civil cases. He has prosecuted domestic abuse cases and represented low-income clients when public defenders couldn't, according to his campaign materials. He also worked as trial counsel at the Securities and Exchange Commission, cracking down on white-collar crime. 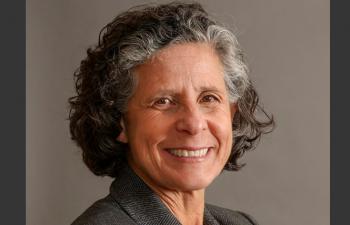 Condes receives East Bay paper's backing
The other out candidate in the race is Elena Condes, a queer Latina who's currently a criminal defense attorney. The East Bay Times endorsed her earlier this month.

In its January 14 editorial, the paper's editorial board wrote that Condes, who is backed by 21 current and two retired judges, is most familiar with the workings of the Alameda County court system.

The editorial was also critical of Fickes' ballot designation as a civil rights attorney, noting he touts his work with the SEC on his website. The editorial stated that his explanation for his civil rights work — that criminal cases generally involve civil rights, "is weak."

Fickes told the B.A.R. Monday that his ballot designation is accurate. He said that a federal statute, 42 U.S. Civil Code Section 1983, allows people to sue the federal government for civil rights violations. A number of Fickes' clients have used that statute, he said, to hold the government accountable.

As for Condes, she wrote in an email that securing the East Bay Times' endorsement was "impactful because it highlights the relevance and seemed to appreciate the depth of experience in the community and the importance of all my judicial endorsements."

According to Fickes' website, BALIF has also endorsed him.

The East Bay Stonewall Democratic Club did not endorse in the race.

Condes said that she is the first Latinx person to run for judge in the county.

"I am even more motivated than ever when I talk to young Latinas who feel empowered and proud of their cultural heritage because of my candidacy," she wrote.

Condes also has the backing of Alameda County Superior Court Judge Carol Brosnahan, whose seat is on the ballot in March because she is retiring later this year after four decades on the bench.

The third candidate in the race, Lilla Szelenyi, a straight ally, wrote in an email that she has found running for office "challenging since I am not a political person."

"Running for a judicial position, especially while you are already in a judicial post, is challenging," she added. "There is not a lot of room for campaigning."

She said she was grateful to the others in the race, Fickes and Condes, "for being collegial opponents."

"I'm not sure how this race will turn out," she wrote. "What I do know is that I have made some good friends along the way."