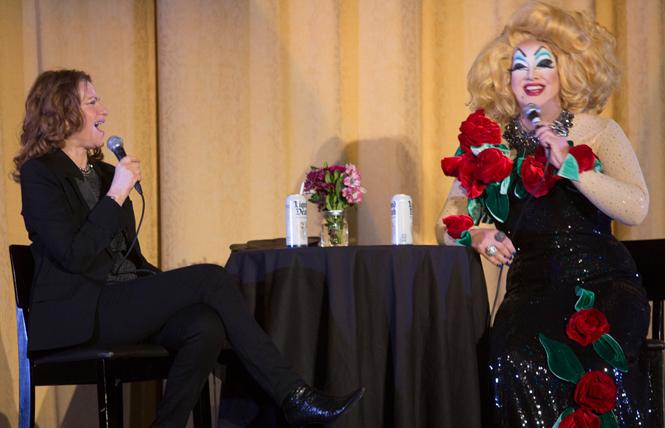 Actress Sandra Bernhard and local drag icon Peaches Christ recently chatted and traded gossip for over an hour on the stage of the Castro Theatre at an evening honoring the lesbian performer, presented during the annual SF Sketchfest Comedy Festival.

Their January 19 conversation preceded a screening of Bernhard's 1982 film debut in Martin Scorsese's cult hit, "The King of Comedy," a satirical black comedy about two mentally unstable stalkers who kidnap a TV star.

Bernhard first gained attention in the late 1970s with her stand-up comedy, in which she often bitterly critiqued celebrity culture and political figures. In recent years, she has played "Nurse Judy" in the award-winning FX series, "Pose."

Now living in New York City with her partner of 21 years, Sara Switzer, and their dog George, Bernhard, 64, talked about "King of Comedy," which she ranks as "one of the great ones" from Scorsese.

Peaches asked Bernhard how she happened to land the part in the film.

Then just 25 years old, Bernhard said she auditioned for the part of Masha, a mentally unstable celebrity stalker, "late in the game," after an estimated 500 other actors had tried out.

"I was so nervous," said Bernhard. After the audition with Scorsese's longtime casting director, Bernhard was told, "Marty needs to meet you."

Then living in Los Angeles, Bernhard was flown back to New York to audition with the lead, Jerry Lewis. Preparing for, and doing, the audition were "nerve-racking," she said, adding that "Marty (Scorsese) and Bobby (De Niro) were "really nice" but that Lewis, although brilliant, was "fucking insane."

"There are a lot of stories" that Lewis was "not that nice," Peaches noted.

"All true," quipped Bernhard, explaining that Lewis was "in my father's generation" and seemed to think of her as a "cute funny little thing" but didn't seem to take her "seriously" as an actor. (Lewis died in 2017.)

When Peaches recently rewatched the film, "I felt like a star was born" with Bernhard's role as Masha.

"You fucking nailed it ... with an amazing performance," Peaches said.

The film got positive critical reviews, opening the Cannes Film Festival in 1983, but was a box office flop, grossing only $2.5 million against its $19 million budget. Bernhard complained that the film "didn't get support from the studio" and given her lack of experience with movies, "I hadn't thought about how I should capitalize" on promoting the movie herself.

"I'm not a hustler in that way," she said, noting that she got a best supporting actress award from the National Society of Film Critics.

Asked what comedic performers Bernhard liked while growing up, she mentioned Carol Channing, Mary Tyler Moore, and Carol Burnett. In addition, Lily Tomlin and Bette Midler were an inspiration when Bernhard developed the one-woman shows she began producing in 1985.

For the past 10 years, Bernhard said she has created a new show that she performs at Joe's Pub in New York City, a performance space within the Public Theater.

For her next project, Bernhard said she is hoping that Netflix or HBO will distribute a show she plans to produce with "hours and hours of great material" she has from previous shows.

Currently, Bernhard has a weekly podcast, "Sandyland," broadcast on SiriusXM Radio. "I love it," she said. Asked if there was anyone she wanted to interview but hasn't yet, she mentioned Michelle Obama, Meryl Streep, and tennis stars Serena and Venus Williams.

She also spoke enthusiastically about her gig on "Pose," which is about New York City's African American and Latino LGBTQ and gender-nonconforming ballroom culture scene in the 1980s and 1990s. Bernhard plays a nurse on an HIV ward.

The first season in 2018 was met with critical acclaim and subsequently received numerous award nominations. The show is entering its third season and also features Billy Porter, the first out gay black man to win an Emmy in a lead acting category, which he received in September 2019.

"The show is 'very intense' because it deals with the HIV epidemic during the 1980s, when we lost so many people," Bernhard said.

"I really lost a lot of friends and saw the decimation of an entire culture," she added.

The show "is not fun in the traditional sense," said Bernhard, who added that it is "wonderful" to be working with a great cast.

"Pose," staffed with transgender people in front of and behind the camera, is a radical change from the entertainment industry when Bernhard began her career.

"Back in the day, all trans people were marginalized and weren't allowed to be in front of a camera on a commercial TV show," she said. The show portrays health care workers who "worked in the trenches totally selflessly" during the height of the AIDS epidemic.

"It's inspiring," said Bernhard. The health care workers "gave up everything" to try to save others. "I am thrilled to be a part of it."