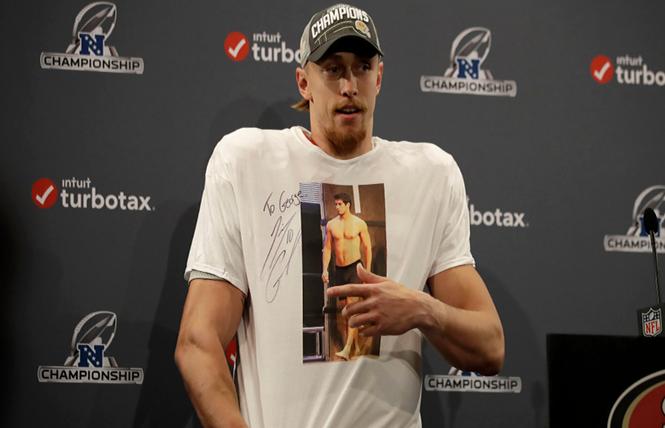 The San Francisco 49ers are headed to the Super Bowl in Miami after a blowout 37-20 NFC Championship win over the Green Bay Packers, powered by a mind-blowing four-touchdown, 220-yard rushing performance by running back Raheem Mostert.

Yes, the same Mostert who went undrafted and then was cut by seven different teams before winding up with the Niners.

His 220 yards rushing were the second most ever in a championship game and set a franchise postseason record.

The man whose club record he broke?

That would be former San Francisco quarterback Colin Kaepernick, who had 181 yards on six carries seven years ago against Green Bay. Kaepernick, by the way, although he is no longer with the team or in the league, threw just eight fewer pass attempts than current quarterback Jimmy Garoppolo.

A lot of the key blocks for Mostert were made by tight end George Kittle, who showed up at his postgame news conference wearing a T-shirt with a signed image of Garoppolo — shirtless.

Which should make Patriots quarterback Tom Brady's absence this Super Bowl a tad easier for some of you admirers out there. Guess Garoppolo isn't as shy as Astros second baseman José Altuve about having his picture taken bare-chested. (It was reported last week in USA today that Altuve didn't want teammates to rip his shirt off after a homerun, with his agent saying he was "shy." But fans found plenty of shirtless images of the second baseman, leading to speculation that he may have been wearing a "wireless device" under his uniform as part of the Astros cheating scandal. Major League Baseball's report said it found no evidence of wearable devices during its investigation.) 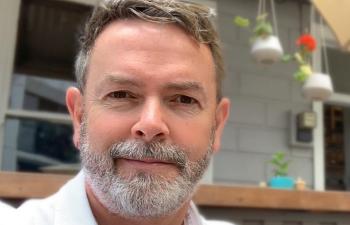 Australian fires impact swim championships
Organizers of the 2020 International Gay and Lesbian Aquatics championships in Melbourne, Australia next month say they hope that the suffocating smoke from wildfires that have been destroying the Australian countryside for weeks will have drastically improved by the time the meet comes around — but are prepared to move the competition indoors if conditions warrant.

"We are very lucky in that the venue we have has indoor space available if we needed to make changes due to the air quality," Alan Shepherd, co-president of Melbourne 2020, told the Bay Area Reporter. "As an international meet, we will take priority for bookings. Also the situation has changed in the last few days with a lot of well needed rain, which means hopefully, the crisis will be lessened before our event starts."

The current Australian Open is one sports event that has not been so lucky, with some players declining to get on the tennis court and others experiencing shortness of breath during matches. But the poor air quality was not enough to stop the Melbourne Wranglers Wrestling Club from hosting its first-ever Wrestlers Pride Tournament against their Sydney rivals, the Harbour City Silverbacks.

"Athlete registrations are going extremely well and exceeding our expectations," Shepherd said of the upcoming swim meet. "We understand how far it is for North American teams to come, but have been amazed at the response."

Melbourne 2020 registrations had been scheduled to close last weekend but have since been extended through January 30. The tournament runs February 20-25.

"Numbers were looking good for swimming and water polo, but we wanted to give some more time for diving and synchro," Shepherd said. "Also our own local non-gay masters clubs are notoriously late registrants. While not quite reaching the numbers that were in New York City, I can say it's going to be a lot of fun. We will release final numbers once registration closes."
As of Monday, eight swimmers and six synchronized swimmers from San Francisco Tsunami had registered.

Niiro said members have been concerned about the ongoing wildfire tragedy.

"Event organizers have been promoting donating to a wildlife relief fund because a lot of wildlife has been badly affected," he added.

Shepherd said swimmers are being asked to donate to Wildlife Victoria, which is working to fund shelters and care for fauna wounded or driven out of their homes by the heat and the fires.

"Wildlife Victoria is the fund we have selected for this drive although there are many more, of course," Shepherd said.