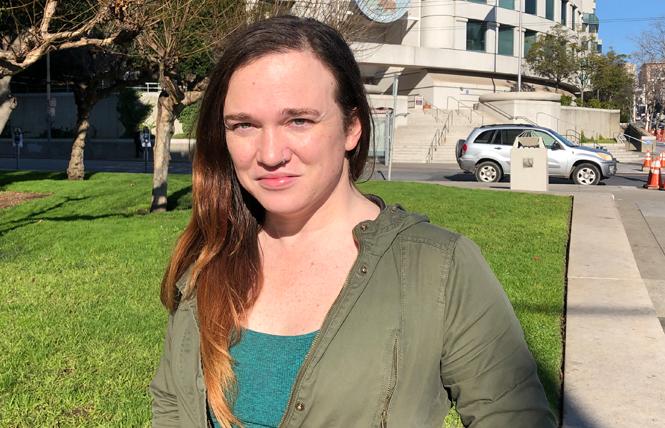 Erin Smith, a transgender woman mounting an underdog campaign for the state's 11th Senate District seat covering San Francisco and parts of northern San Mateo County, has secured the support of local Republicans for her candidacy.

Currently deputy vice chair of communications for the San Francisco Republican Party, Smith won the endorsement of the local GOP last Wednesday, January 8. She has served on the Republican County Central Committee since being appointed to it last February and is running for election to the party's oversight body on the March 3 primary ballot.

Smith is one of two out women trying to unseat gay state Senator Scott Wiener (D-San Francisco); the other being queer Democratic socialist Jackie Fielder. The duo of political newcomers faces an uphill battle in defeating Wiener, a formidable politician and fierce campaigner who is seeking a second four-year term this year.

Due to the heavy Democratic makeup of the district, it is expected that both Wiener and Fielder will survive the primary and compete head-to-head in November. During an interview with the Bay Area Reporter this month, Smith acknowledged she faces long odds in the race.

"I am completely realistic about it. I know it is an uphill battle," said Smith, 40, who shares the same birthday, May 22, as the city's first gay elected official, the late supervisor Harvey Milk. "I am not a stranger to being the underdog ... I understand the odds. It is a tricky race."

What she is banking on is the fact that Wiener has become a lightning rod due to his legislative positions on housing policy, particularly his controversial Senate Bill 50 that aims to see denser housing projects built near transit centers and limits the ability of city officials to block such construction, and that Fielder is too far to the left politically for those who may want to cast a protest vote against the incumbent in the primary.

"I feel Scott has alienated a lot of centrist Democrats," said Smith, who lives with her partner of two years and adopted 9-year-old pit bull terrier Skrimshaw in the city's South of Market neighborhood. "Jackie is passionate and young but really to the left; she is all about giving people free stuff and tax the rich people. It gives me a chance to carve off some centrist people."

Though she supports more housing construction, Smith opposes SB 50, as she worries the bill will erode the unique feel and character of San Francisco's neighborhoods. She told the B.A.R. a better approach would be to reform the state's environmental review process for developments and to fast track affordable housing approvals.

"I don't think upzoning the entire state is desirable," said Smith, who believes in the concept of subsidiarity. "Local people need to work with their local government."

In 2018 local GOP leaders had urged Smith to run against Assemblyman David Chiu (D-San Francisco) but she declined, as she didn't feel the timing was right. She agreed to run this year partly to ensure that Wiener would face a challenger.

"A one-party state is bad for everyone," said Smith, adding that she is not a partisan when it comes to politics. "I would reach across the aisle to work with anyone. I want people to live a happy, successful life."

Smith and her younger sister grew up in Glendora, Mississippi on a cotton farm; their ancestors have grown the commodity for 150 years. Her paternal family traces its lineage back to Pocahontas, who is Smith's 15th great-grandmother.

After high school Smith attended the University of Mississippi but didn't graduate. Instead, she became a merchant marine and earned a ship captain license from the U.S. Coast Guard. Her vessel was one of hundreds that responded to the Deepwater Horizon oilrig disaster in the Gulf of Mexico; she and her crew spent a total of three months at sea helping to cap the well.

"I grew up on a farm and didn't have much experience other than paddling a canoe in the bayou near our house. But I was always interested in the ocean," recalled Smith, who owned a 145-acre ranch in the Magnolia State.

While working in Louisiana, Smith went into anaphylactic shock from an insect bite and drove herself to a hospital. There she came close to dying, seeing the proverbial tunnel of white light as she lay on a gurney.

"I was in coma territory," she recalled, adding, "I thought I was going to die. I had a weird sense of relief."

When she pulled through, Smith resolved to transition and came out to her family and friends. To her surprise, they were overwhelmingly supportive. She began transitioning in 2014 then sold off her property in order to relocate the following year to San Francisco.

Smith and her boyfriend, who prefers to remain private for now as she campaigns, are part of the gig economy and working on their own micro-mobility startup focused on the last transit mile. An outspoken gun rights activist, Smith's advocacy on the issue led her to be featured on the cover of a special issue Time magazine devoted to the topic in November 2018.

It was also played up in a San Francisco Examiner profile about her Senate candidacy. Yet gun rights are not a part of her campaign platform, and Smith told the B.A.R. she left her guns back in Mississippi and doesn't own one in San Francisco.

Nonetheless, her friend Erin Palette, a transgender lesbian who lives in Florida, hopes her candidacy shines a light on the issue of gun rights. The two met online following the 2016 terrorist attack at the Pulse gay nightclub in Orlando, as Palette founded Operation Blazing Sword, a nonprofit that provides free lessons to LGBT people who want to learn how to use firearms.

Palette also serves as the national coordinator of the Pink Pistols, an affinity group for LGBT firearm owners and gun rights activists. Stressing that she was speaking personally and not on behalf of the nonprofit groups, Palette told the B.A.R. by phone this week that when she learned about Smith's decision to enter the Senate race, "I was pleased to hear that a pro Second Amendment queer woman was running for the office. Queer people are disproportionately affected by violence."

Having gotten to know Smith over the years, Palette said, "I think she understands the problems that affect us on a daily basis. She can more adequately represent the queer population there."

While Smith tries to court centrist Democrats, her support of President Donald Trump's reelection may turn off such voters. Asked how she could back a president whose administration has systematically rolled back protections and rights for transgender people, as well as the LGBT community as a whole, Smith replied one can criticize Trump while still backing his presidency.

Being contrarian isn't new for Smith.

"I was a transgender person in Mississippi and am a Republican in San Francisco. It is the story of my life, always the outsider," said Smith.

Alice LGBT Dem club welcomes new co-chair
The Alice B. Toklas LGBT Democratic Club voted in a new female co-chair this week, while the more progressive Harvey Milk LGBTQ Democratic Club is expected to reelect its president to a new term next week.

She will serve in the co-chair position through January 2022 and succeeds Gina Simi, whose two-year term ended. Alice's male co-chair, David Fujimoto, is now serving in his final year and is set to step down next January, as the club likes to rotate in a new co-chair each year.

"I think Alice is a hugely important club in San Francisco politics but also in queer politics in the city and nationwide," said Arbona. "It has been such a thrill to be part of the club's board the last three years. The chance to help guide it through 2020 and 2021 as well was one that when first brought up I was very much interested in it, and I am really glad to have the club's support."

Arbona, 26, who identifies as queer, is a San Francisco native who grew up in Noe Valley. The University of Chicago graduate, where she earned a B.A. in political science and government, had worked as a field representative for Assemblyman David Chiu (D-San Francisco) but left last June for a job handling communications for the San Francisco Department of Technology.

As for seeking public office herself one day, Arbona told the B.A.R. that doesn't interest her.

"That is not on the radar," she said. "I've heard just running the club is hard enough."

When it meets Tuesday, January 21, the Milk club is expected to elect its current president, Kevin Bard, to another one-year term. He has led the club since last January, when he won a contentious leadership fight for the post against former president Honey Mahogany.

Web Extra: For more queer political news, be sure to check http://www.ebar.com Monday mornings for Political Notes, the notebook's online companion. This week's column reported on the race for an open California Senate seat in the Palm Springs area.