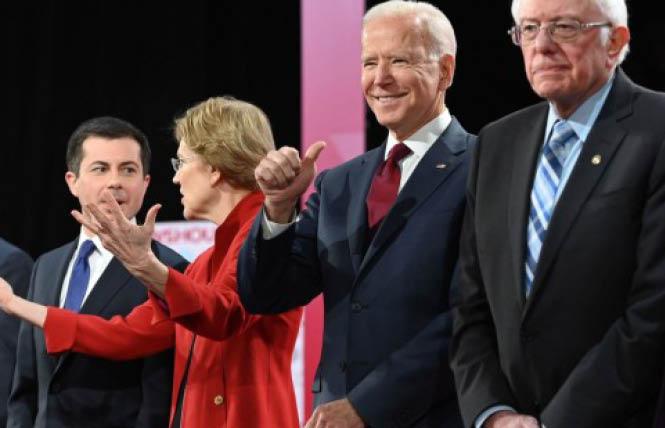 Gay Democratic presidential hopeful Pete Buttigieg was under fierce attack Thursday night in the sixth Democratic debate and, by the end of the evening, there was some data suggesting he had suffered in his effort to convince voters he is a candidate who listens to the little guy and is electable.

The three-hour event in Los Angeles sponsored by PBS NewsHour and Politico also brought more reference to LGBT issues than the previous five debates. (Not including the LGBT-specific forum held in October.)

Massachusetts Senator Elizabeth Warren, one of the Democratic field's most progressive candidates, fired off most of the incoming hits at Buttigieg, but he also had to fend off significant attacks by one of the field's moderate challengers, Minnesota Senator Amy Klobuchar.

Buttigieg and Warren were clearly ready for battle Thursday night, and once they started taking punches, the intensity of the fight escalated quickly. And while Klobuchar jumped in at one point to stop the fracas, she, too, threw some verbal jabs at Buttigieg.

Buttigieg had to know the attacks were coming. He's been steadily climbing in the polls in his presidential bid. He leapt into the lead in mid-November polling in Iowa and is bouncing between first and second place in New Hampshire. His success cost Warren her own surge to the top. For weeks, they've been taking swipes at each other: Warren saying that the South Bend, Indiana mayor is basing his ideas on what's popular with focus groups and Buttigieg saying Warren is too rigid in pushing Medicare for All and that her "math is certainly controversial."

With the Iowa caucuses just six weeks away, the December 19 debate inspired them both to amplify their critiques. It was polite and understated at first. A moderator asked candidates to comment on former President Barack Obama's recent remark that women are "indisputably better" as leaders than men.

Warren said she thought Obama was talking about "who has power in America, whose voices get heard."

"I believe he's talking about women and people of color and trans people and people whose voices just so often get shoved out," said Warren. Then she took a hard pivot, pointing out how the presidential candidates are "running their campaigns in 2020."

"I made the decision when I decided to run not to do business as usual and I'm proud to have been in 100,000 selfies," said Warren. Those photos, she said, gave her intimate familiarity with the personal stories and challenges of "people who can't pay their medical bills, stories from people who can't find child care." But most candidates on the stage with her, she said, go "back and forth from coast to coast to rich people and people who can put up 5,000 bucks or more in order to have a picture taken, in order to have a conversation, and in order maybe to be considered an ambassador."

The moderator quickly called on Buttigieg, who acknowledged what most political observers were probably already thinking — that Warren's dig at candidates cozying up to "rich people" was directed at him.

"Here's the thing," said Buttigieg. "Donald Trump and his allies have made it abundantly clear that they will stop at nothing, not even foreign interference, to hold onto power. They've already put together more than $300 million. ... This is our only chance to defeat Donald Trump, and we shouldn't try to do it with one hand tied behind our back."

He was tacitly acknowledging that he was raising funds from wealthy people, but he added that he's seeking contributions from all walks of life, whether "you're a grad student digging deep to go online and chip in 10 bucks" or "you can drop $1,000 without blinking."

That's when Warren delivered a wallop, repeating a recent news report that Buttigieg was the beneficiary of a lavish closed-to-the-press fundraiser in a "wine cave" of a wealthy Napa Valley couple. The wife, Kathryn Hall, garnered an ambassador position from President Bill Clinton after she and her husband supported his campaign.

Buttigieg countered quickly, noting he was "literally the only person on this stage who is not a millionaire or billionaire." Then he hit her with his own counterpunch.

"I do not sell access to my time," said Warren. "I don't do call time with millionaires and billionaires."

"Hold on a second," said Buttigieg. "As of when?" He then noted a recent news story about Warren that indicated that she had done fundraising with big donors for her re-election campaign to the U.S. Senate in 2018. Then, according to the New York Times, she vowed not to solicit money from big dollar donors but transferred $10 million of the Senate re-election money into her presidential campaign.

That's when Klobuchar finally said, "I did not come here to listen to this argument." She said the candidates could not defeat Trump by arguing with each other "but by finding what unites us and getting that done."

Klobuchar then got in a swipe at Buttigieg: In the last debate, she said, "you basically mocked the hundred years' experience" of the other U.S. senator candidates and former Vice President Joe Biden. But those people, she pointed out, had accomplished a great deal with their work in Washington, D.C. She cited specific examples of important legislation that she, Biden, Warren, and Senator Bernie Sanders (I-Vermont) had accomplished.

Buttigieg swung back, noting that Klobuchar, earlier in the debate, seemed to suggest Buttigieg was just rattling off a "talking point" about the First Amendment when he criticized Trump for describing the press as the "enemy of the people."

"Let me tell you about my relationship to the First Amendment," said Buttigieg. "It is part of the Constitution that I raised my right hand and swore to defend with my life," he said, referencing his military service in Afghanistan. "That is my experience. And it may not be the same as yours, but it counts, Senator. It counts."

But Klobuchar doubled down, pointing out that Buttigieg did not have the same track record as she does when it comes to winning elections. She noted he made an unsuccessful bid to become chair of the Democratic National Committee.

"The point is we should have someone heading up this ticket that has actually won and been able to show that they can gather the support that you talk about of moderate Republicans and independents ... and not just done it once," said Klobuchar. "I have done it three times. I think winning matters. ... And I also think showing our party that we can actually bring people with us, have a wider tent, have a bigger coalition, and, yes, longer coattails — that matters."

Klobuchar was clearly trying to win over moderate voters — those who are considered more likely to support one of the Democratic field's moderate candidates (Buttigieg, Biden, and Klobuchar).

"I know that, if you just go by vote totals, maybe what goes on in my city seems small to you," said Buttigieg. "But if you want to talk about the capacity to win, try putting together a coalition to bring you back to office with 80% of the vote as a gay dude in [Vice President] Mike Pence's Indiana."

"If you had won in Indiana, that would be one thing," shot back Klobuchar. "You tried and you lost by 20 points." That was an apparent reference to Buttigieg's one attempt at a statewide office, running for secretary of state. He lost by 25 points, and Klobuchar opened up an "electability" concern for Buttigieg.

"Being the focus of several of his rivals' attacks seems to have hurt Pete Buttigieg; he got low marks relative to how well-liked he was going into the debate," said fivethirtyeight.

Some political commentators said Biden "won" because he did not commit an embarrassing gaffe, something that has plagued him in previous debates. Many gave the win to Klobuchar, who was pithy, confident, and persuasive in her hold on a moderate approach to problem-solving.

LGBT issues
The debate will be remembered primarily for the attacks on Buttigieg but, for LGBT voters, there were other moments to recall.

In answering a question about whether the candidates had any litmus test for determining who they might appoint to the Supreme Court, Buttigieg made reference to his marriage to a man, something made possible "by the grace of a single vote" on the high court. He said he expected a justice nominee would have "an understanding that voting rights are human rights" and that "equality is required of us all."

Klobuchar noted that, among the judicial nominees she has recommended for federal court appointments, was lesbian Sharon Lubinski, who was confirmed as the first openly gay U.S. marshal.

Trans issues
PBS NewsHour White House correspondent Yamiche Alcindor asked candidates what they would do to stop the violence against transgender women of color. Sanders said he would do "everything humanly possible to end all forms of discrimination against the transgender community," including making sure that "health care is available to every person in this country, regardless of their sexual orientation."

Warren made a promise: "I will go to the Rose Garden once every year to read the names of transgender women, of people of color, who have been killed in the past year," said Warren. "I will make sure that we read their names so that, as a nation, we are forced to address the particular vulnerability on homelessness. I will change the rules now that put people in prison based on their birth sex identification rather than their current identification."