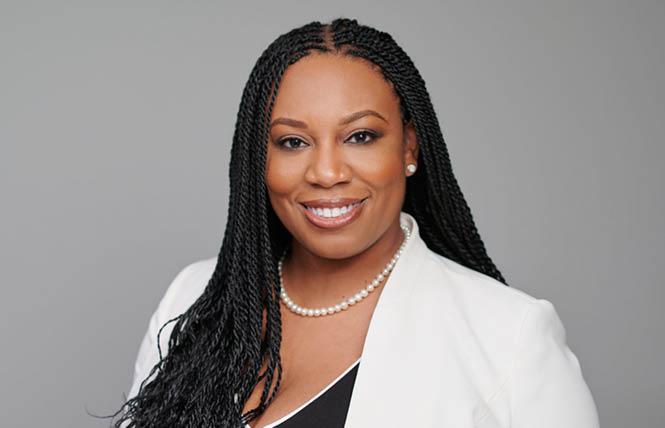 The National Center for Lesbian Rights, a nonprofit public interest law firm based in San Francisco, has chosen a new executive director after a lengthy search.

Imani Rupert-Gordon, 40, was selected to be the new executive director effective March 16. She will succeed Cindy L. Myers, Ph.D., who has been serving as interim executive director since the departure of Kate Kendell in late 2018. Kendell had led the agency for 22 years.

"I'm thrilled to join the team at NCLR and to help expand their incredible work," Rupert-Gordon said in a news release Tuesday, December 17. "There has never been a more important time for NCLR's approach to advancing LGBTQ equality and liberation, and I am grateful to be a part of the team as we meet this challenge."

When Rupert-Gordon takes the helm of NCLR next year, African Americans will be leading two of the country's largest LGBT advocacy organizations. In August, Alphonso David became president of the Human Rights Campaign based in Washington, D.C.

Kendell said in the release that she has known Rupert-Gordon for years and that "she is quite literally, perfect for the job."

"I would be hard-pressed to name a better choice for assuring the ongoing success and deepening the impact of NCLR than Imani," Kendell said. "I cannot wait to witness and support Imani's leadership of our beloved NCLR."

Rupert-Gordon, a queer woman, is currently the executive director of Affinity Community Services, where she was hired in February 2016. Affinity is a Chicago nonprofit that is "a social justice organization that focuses on health and wellness, leadership development, and community building," according to its website. It is the nation's oldest social justice organization serving the needs of black LGBTQ people, with a particular emphasis on black women, according to the release.

Prior to that, Rupert-Gordon was director of the Broadway Youth Center, a Chicago organization for homeless youth, which provides social services such as housing referrals, testing for sexually transmitted diseases, and other health services, according to its website. Broadway Youth Center, which has served more than 1,500 LGBTQ youth experiencing homelessness and housing instability, is under the auspices of Howard Brown Health, an organization specifically for LGBT individuals.

Bay Area connections
While much of her work has been in Illinois, Rupert-Gordon has some Bay Area history, having served as a board member and lead grant writer for the Billy DeFrank LGBT Center in San Jose between March 2010 and July 2011, according to her LinkedIn profile. She also completed a fellowship at the Rockwood Leadership Institute in downtown Oakland, which helps leaders in nonprofits develop skills and best practices.

She earned a bachelor's degree in sociology from UC Santa Barbara before moving on to the University of Chicago School of Social Service Administration for her master's degree.

Rupert-Gordon's sister, Maya Rupert, a published writer on issues touching on intersectionality, is currently serving as the campaign manager for Democratic presidential candidate Julián Castro, according to her Twitter account. Maya Rupert used to work as policy director at NCLR.

According to its website, NCLR was founded in 1977 by Donna Hitchens, who was fresh out of law school and went on to become the first elected lesbian judge in the United States in 1990 when she won a seat on San Francisco Superior Court. She retired from the bench in 2011.

"I cannot wait to see what Imani Rupert-Gordon does for the organization," Hitchens said in the release. "She has my full support and I know she will likewise take NCLR to new heights with ever greater relevance, impact, and consequence."

Shannon Minter, a trans man who is the longtime legal director of NCLR and argued to overturn Proposition 8 before the California Supreme Court, praised Rupert-Gordon's hiring.

"NCLR could not ask for a stronger leader to take the helm at this critical moment in our movement's history," Minter said in the news release. "I am thrilled to have this chance to work directly with such a brilliant and compassionate advocate who understands the complexity of the issues facing LGBTQ people and the need for creative and sophisticated new strategies to address them."

NCLR's board co-chairs noted that Rupert-Gordon had impressed the selection committee with her extensive background.

"Imani is the perfect fit for NCLR's mission, culture, and commitment to bold leadership," board Co-Chair Emily Doskow said in the release. "She's a dynamic leader with a wealth of experience and a strong vision for the organization's future. We could not be more fortunate to have her joining NCLR."

Added board Co-Chair Felicia Medina, "We were blown away by Imani's passion and results-oriented leadership. ... She knows how to call in and call out, and will fight every moment of her tenure to ensure that all of us, particularly the most vulnerable in our community, are legally protected and can live their truth."

Christopher Vasquez, the communications director for NCLR, said that the salary for the executive director position is in the range of $225,000 to $250,000, but wouldn't share the specific salary.

According to NCLR's 2017 Form 990, its annual budget was about $5 million, which Vasquez confirmed is still the case. Kendell's salary was listed as $232,560, plus she also earned $27,903 in additional compensation.