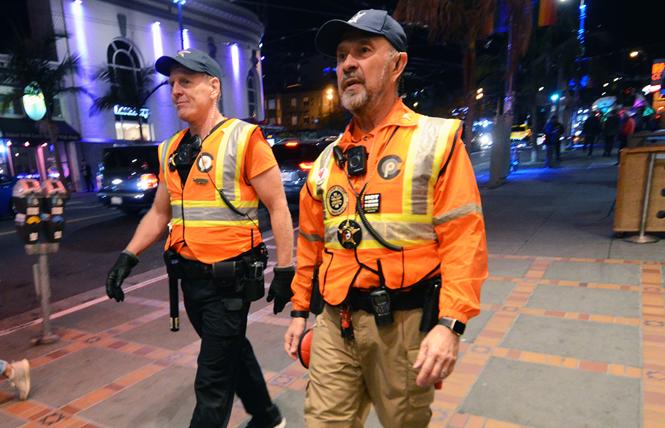 As the holiday season brings shoppers to the Castro, residents and merchants are weary of incidents of harassment of women — employees and customers — despite the fact that in at least two cases, stay-away orders have been issued to two men, according to copies of the orders obtained by the Bay Area Reporter, and court records.

Masood Samereie, a straight ally who is president of the Castro Merchants business association, said that he has not heard of the two individuals who are the subjects of the orders harassing anyone since the summer.

"We are working closely with Supervisor [Rafael] Mandelman's office and the Mission Station police captain (on safety), and, as a matter of fact, got additional foot patrol officers," Samereie said.

There will be extra officers "in the area of Market Street between Castro Street and 19th Street" between 6 a.m. and 1 a.m., as well as around Jane Warner Plaza and the Eureka Valley/Harvey Milk Memorial Library through the holidays, according to spokesmen from the San Francisco Police Department.

Ronald Mitchell, 44, was ordered by a San Francisco judge May 8 to stay at least 50 yards away from Orphan Andy's restaurant at 3991 17th Street — although that distance still allows him to be on much of 18th Street in the Castro. The order lasts for four years.

"He was threatening me and one of my waiters and that's what instigated it," said William Pung, one of the co-owners of the popular, 24-hour diner, in a phone interview with the B.A.R. "He would stand and shout inside the restaurant and ring my doorbell at 3-4 a.m. One time I went down there and he was threatening and saying things that didn't make any sense. He said 'You know what Koreans do to Americans? They murder them.'"

There was no attorney listed as representing Mitchell and he could not be reached for comment.

Mandelman, a gay man who represents District 8 on the San Francisco Board of Supervisors, said that he was aware of a stay-away order involving Orphan Andy's.

Pung isn't the only one having to address harassment. A woman who works in the Castro, but requested anonymity, said that she has had numerous problems with an individual people refer to as "Kenny," and who court records indicate is Kennith Cargile.

"He harasses my staff. One of our employees in particular, he will run toward her as fast as he can," the woman said. "He targets women. Sometimes he just wants to be my best friend. Sometimes you say you have to leave and he lunges at you and gets aggressive.

"It's honestly terrifying because you don't know what mood he's in that day," the woman added.

Pung said he is familiar with that situation, too.

"I think everyone knows Kenny," he said. "He's kind of a nuisance."

Subsequently, the B.A.R. obtained a June 2019 restraining order directing Cargile, who the order states is between 55 and 60 years old, to stay at least 50 yards away from Ritual Coffee, located at 2299 Market Street Unit A, and to avoid loitering in front of it. The order lasts for four years.

There was no attorney listed as representing Cargile and he could not be reached for comment.

While a spokesman for the San Francisco Police Department initially told the B.A.R. that "the officers and investigators" at Mission Station "are not familiar with" Kenny, another spokesman indicated that they were aware of him after the B.A.R. was able to provide his full name.

Mandelman and aide Tom Temprano said that the supervisor's office was able to help Ritual Coffee get a restraining order to keep Cargile away. Ritual Coffee officials did not want to speak on the record about Cargile.

The anonymous woman said that the sense of danger on the street — including harassment and open-air drug use — sometimes makes it difficult to do business.

"I was raised in San Francisco but oftentimes you think it's gotten worse," she said. "There's never been as much of a drug problem. It's normal to see needles on the ground and step over human shit. It doesn't faze me anymore. It's something we expect and mentally prepare for and that the staff is prepped for."

Nevertheless, she is committed to continuing to work in the Castro.

"I'm proud to be where we are," she said. "We have to keep fighting for our city."

Some businesses shutter
Not everyone has demonstrated such commitment to the neighborhood. Cheri Mims, the owner of the Ixia floral shop that used to be at 2331 Market Street, told Hoodline in April that one reason she left the Castro neighborhood was safety and homelessness.

"I think it has an effect on everyone, not just me," she told the site.

Mims did not respond to a B.A.R. request for comment.

Deedee Crossett, the founder of the Skin on Market skin care store that's at 2299 Market Street Unit C, said in a phone interview with the B.A.R. that two of her former employees were harassed by Cargile.

Cargile has a "type" of woman he targets, and generally doesn't treat others the same way, Crossett said.

"Two employees who are no longer with me — he gave them a hard time when I wasn't around," Crossett said. "It started with smirking and turned into aggressive behavior; he'd stare at them, flex his muscles, and scream.

Crossett said that she has been in touch with Castro Community on Patrol and that Mandelman's office said that it was "working on" the issue.

Mandelman said that the city needs to do something about the sense of danger in the district.

"I think a lot of people are fed up and I am fed up," Mandelman told the B.A.R. "We have a vacancy crisis in the Castro and I've heard of numerous people closing their doors because people with serious behavioral issues are wandering into their businesses.

"I've been pushing for more behavioral health resources and more of a response from the police. We have a new DA, and we're going to have to work with Chesa Boudin and hopes he takes this seriously," he added.

Boudin will take office in January. In an emailed statement to the B.A.R. December 9, Boudin said that a sense of safety is a "basic human right" and that those who endanger it "will be held accountable."

"Every San Franciscan has the right to feel safe in this city, regardless of their race, class, gender identity, sexual orientation, or citizenship," Boudin wrote. "I urge anyone who feels unsafe in their community due to the harassment of others to call local law enforcement or reach out directly to my office."

Greg Carey, the chair of Castro Community on Patrol, said people have an obligation to help keep the community safe and can't remain in a position of "learned helplessness."

"The fact is that most cops want to arrest bad guys, but they are always under-staffed and need information from the victim and/or witnesses," Carey said. "We want to see the public become more involved in their own safety."

Carey said that he is aware of Cargile.

Carey had several pieces of advice for victims of crime, including telling police that they want to press charges when an officer shows up (what he called the "magic phrase").

Carey said to always ask a 911 call-taker for the computer aided dispatch number, or CAD. Having the CAD allows victims to follow up with the case later by calling the police non-emergency number, which is (415) 553-0123 in San Francisco.

"There needs to be a return to civility. Some of it comes down to people being afraid to intervene," she said. "We have had people threaten our employees and sit outside and wait until we're all off."

Captain Gaetano Caltagirone, who oversees Mission Station, which covers part of the Castro, was not available for an interview. But a San Francisco Police Department spokesman said the captain is aware of the situation.

"Captain Caltagirone is committed to staffing the Castro foot beat and foot beat officers make every effort to contact merchants, residents and visitors during their tour of duty," said Officer Michael Andraychak in the statement. "Additionally, Mission Station's sector car officers respond to calls for service in the community. Officers are encouraged to meet and make contacts with members of our community. We encourage our neighbors and business owners to reach out to SFPD to do the same."

Carey said that CCOP is looking for volunteers and has a training planned for Saturday, January 18, from 1 to 4 p.m. There is no cost for the training and more volunteers means that CCOP can do safety patrols on the weekends, Carey said.

"We suggest people attend even if they are unsure of whether they want to become a volunteer," Carey wrote in an email. "They can decide after they understand our approach and methods."

CCOP volunteers do not make arrests and mainly provide support to victims or assist in contacting authorities.

People interested in signing up for CCOP's volunteer training can go to www.castropatrol.org and click on the "Sign Up Now" button in the upper right corner, or https://bit.ly/2QJmaZx