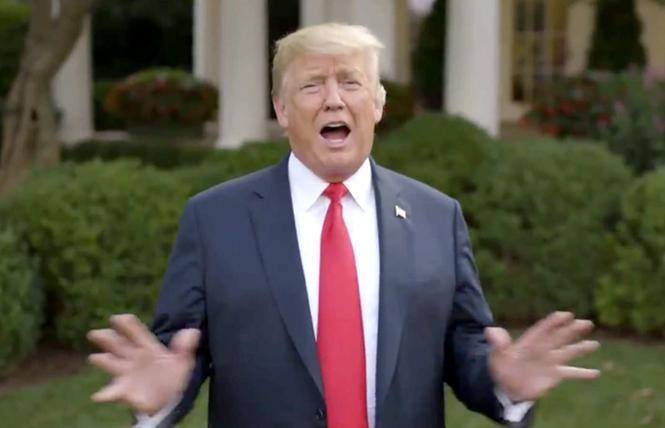 President Donald Trump's Health and Human Services Department is working to change rules on how its grants are funded. Photo: Courtesy Twitter

The Department of Health and Human Services' news release announcing a planned change in the administration of its grants had an innocuous-sounding title, one that said its purpose was to ensure that HHS regulations do not "impose specific public policy requirements beyond U.S. statutory requirements."

But for many LGBT legal activists, the announcement was a clear dog whistle, signaling that the federal government would do nothing to stop or discourage discrimination against LGBT people.

In its announcement November 1, HHS issued two notices: one announcing that it would no longer enforce existing Obama-era rules and another announcing its proposed change in the rules governing federal grants the department oversees.

Sharon McGowan, legal director for Lambda Legal Defense and Education Fund, said the proposed grant rule "rolls back critical protections against discrimination on the basis of sex, sexual orientation, gender identity, and religion, and in doing so, puts at risk some of the most vulnerable members of our communities, including LGBT people who are poor or experiencing homelessness; LGBT seniors and LGBT youth in out-of-home care, including foster children in need of loving families; people living with HIV; and many others."

"Furthermore," said McGowan, "HHS' announcement that it will immediately cease enforcement of existing non-discrimination protections, rather than adhering to the established procedures for changing regulations such as these, once again demonstrates the Trump administration's utter disregard for the rule of law."

Mara Keisling, executive director of the National Center for Transgender Equality, said the change is a "moral crime and a severe abdication of HHS' mission to preserve public health."

The news is the latest volley between partisan-driven occupants of the White House. And the impact is expected to have far-reaching negative consequences for LGBT people in a wide variety of arenas — from programs addressing homeless youth and suicide prevention to sex education and who can serve as adoptive or foster parents.

The proposed change puts the Trump administration on the side of anti-LGBT organizations in a long-running conflict with the LGBT community. The conflict has played out in numerous areas, with many individuals and groups arguing that they should be able to discriminate based on sexual orientation and gender identity because their religious beliefs compel them to do so. LGBT legal activists counter that anti-LGBT entities are using religious beliefs as an excuse to discriminate against them and circumvent state laws and federal regulations.

The Obama administration sided with LGBT groups and issued regulation changes that said that federal laws prohibiting discrimination because of sex also prohibited discrimination based on sexual orientation and gender identity. The Obama rule changes covered HHS and the departments of education and justice and essentially erased rules adopted late in the second term of President George W. Bush that enabled doctors to refuse to treat an LGBT person by citing religious beliefs.

Now, the Trump administration is seeking to undo the Obama rules.

The HHS news release said the Trump administration had "serious concerns" about implementation of the regulations under the "prior administration." This Trump change would enforce only "non-discrimination provisions passed by Congress and signed into law" and those required by "applicable Supreme Court decisions."

"The proposed rule represents the Trump administration's strong commitment to the rule of law — the Constitution, federal statutes, and Supreme Court decisions. These require that the federal government not infringe on religious freedom in its operation of HHS grant programs and address the impact of regulatory actions on small entities," HHS' release stated.

"... The proposed rule would better align [HHS] grants regulations with federal statutes, eliminating regulatory burden, including burden on the free exercise of religion," it added.

The rule being changed is the Uniform Administrative Requirements, Cost Principles, and Audit Requirements for HHS Awards (aka the UAR), which went into effect in January 2017.

HHS is required to accept public comments on the proposed change for the next 30 days. Such comments can be submitted at www.regulations.gov website and following "Submit a comment."

HHS said it was concerned that a "substantial number of small entities" were suffering "significant economic impact" as a result of enforcement of the Obama-era UAR. It cited several lawsuits, including one in Michigan, which challenge the existing rule as violating the religious and free speech rights of an adoption agency that bars LGBT people from serving as parents. Those lawsuits, HHS says, impose a "regulatory burden" on the department and discourage certain religious entities from applying for grants.

"As a result, the department is choosing not to enforce the provisions" of that rule and replace it with a "new and amended" rule, HHS documents stated.