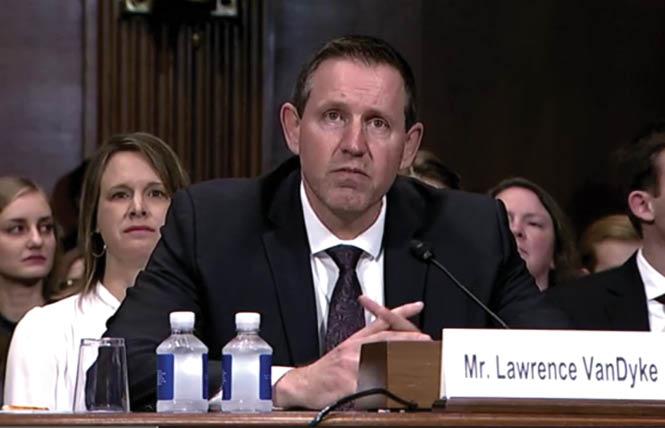 A confirmation hearing for two of President Donald Trump's nominees to the nation's largest federal appeals court snared considerable media attention Wednesday after one of them dissolved into tears while trying to defend himself against claims that he harbors animus toward LGBT people.

Interestingly, the other nominee before the October 30 Senate Judiciary Committee hearing was Trump's openly gay nominee to that same appeals court.

Trump sent the nominations of U.S. Deputy Assistant Attorney General Lawrence VanDyke and gay federal prosecutor Patrick Bumatay to the Senate October 15. Their nominations are to fill two seats on the 29-member 9th U.S. Circuit Court of Appeals, which covers California and eight other western and Pacific states. Confirmation of both nominees by the Republican-controlled Senate is generally expected. And the American Bar Association rated Bumatay as "qualified."

But the ABA rated VanDyke as "not qualified" and underscored its point with an October 29 letter from William Hubbard, chairman of the ABA's Standing Committee on the Federal Judiciary. The letter said a majority of the standing committee determined VanDyke was not qualified based on interviews with 60 lawyers and judges who have observed his work first-hand and more than 600 pages of emails, reports, and opinions pieces.

Those concerns were the subject of most of the two-hour hearing.

During the hearing, Republican members of the judiciary committee suggested the ABA's harsh rating of VanDyke was largely the result of one person, the ABA's lead evaluator. They noted that evaluator, Montana attorney Marcia Davenport, contributed $150 to VanDyke's opponent for a Montana state Supreme Court seat in 2014. But none of their efforts seemed to take the sting out of the letter for VanDyke, especially the part suggesting he was anti-LGBT.

Five Democratic senators and three Republican senators zeroed in on the allegations that VanDyke, 46, harbored hostility toward LGBT people.

Senator Patrick Leahy (D-Vermont) noted that VanDyke had written an op-ed in a law school paper in 2004 that said many studies were raising concerns about gay people serving as parents and saying that marriage between same-sex couples could hurt other families. Noting that the U.S. Supreme Court ruled in 2015 that bans against same-sex marriage are unconstitutional, Leahy asked VanDyke if he still believes same-sex marriage harms children.

VanDyke said the Supreme Court has ruled on the issue, it's the law of the land, "and that's what I would apply."

"As far as my own personal views, I think it's important to recognize [those personal views] would play no role in how I would judge," he said.

"So, your personal views have not changed," said Leahy.

"My personal views have definitely changed since 2004," said VanDyke. "But as to exactly what my personal views are, Senator, I don't want to leave the impression that those would play any role in how I would judge as a judge, Senator."

Pressed further, VanDyke said he was shocked by the part of the ABA letter that suggested he couldn't be fair to LGBT litigants.

Later, Senator Dick Durbin (D-Illinois) pointed out that VanDyke had told Leahy that his personal views about same-sex marriage had changed. But in 2013, noted Durbin, VanDyke, as solicitor general for Montana, had joined a brief to the U.S. Supreme Court that opposed a pro-LGBT ruling from the New Mexico Supreme Court.

Durbin also read the text of an email VanDyke sent to a state attorney general about the New Mexico case, Elane Photography v. Willock. VanDyke wrote, "This is an important case for the future of religious freedom in America because there's a fairly obvious collision course between religious freedom and gay rights. And this case, because it's an extreme case, could be very important in establishing that gay rights cannot always trump religious liberty."

"When, in your view, can gay rights trump religious liberty and when can it not?" asked Durbin.

VanDyke dodged the question and talked, instead, about "a case where I represented an LGBTQ advocacy group in the United States Supreme Court in a case involving religious liberty."

"That was one of my favorite cases to work on," said VanDyke. "It was a pro bono case, a case that I sought out, where I got to work with the organization we represented. I was so happy to work on that case ... because it was illustrating that there doesn't have to be a conflict" between rights of LGBT people and religious liberty.

"But," asked Durbin, "if a person asserts a belief and his conduct following that belief is racist in nature — racist — but [the person] says 'Yup, it's my religious belief,' is that enough?"

"These are very, very difficult issues," said VanDyke, who again dodged the question.

"You've said some pretty forceful things, as a student and since, working in the solicitor general's office, about LGBT rights," said Durbin. "Now, you're telling us your views have changed. ... And I'm trying to understand: What is the bottom line here in terms of whether or not you'll respect the rights of individuals who are in the LGBTQ community and have been recognized to have certain rights by the United States. When does religious liberty trump those rights?"

"I do respect those rights, personally," said VanDyke. "The bottom line for me, as a judge, would be what the law requires — what the Supreme Court precedent has said is required. ... My intention would be to uphold those precedents, not my personal views."

Durbin told VanDyke that "you said some very painful and inflammatory things about people who are LGBTQ."

Mysterious tearful breakdown
It wasn't during interrogation by Durbin or Leahy or any Democrat that VanDyke fell apart. The dramatic moment came while Senator Josh Hawley (R-Montana) was asking VanDyke about the ABA letter.

"Did you say that you would not be fair to the LGBTQ community?" asked Hawley, even though the ABA letter did not claim that VanDyke made such a statement. The letter said that "some" of the 60 people interviewed about VanDyke's qualifications "raised concerns" about whether VanDyke "would be fair" to LGBT people. And the letter noted, "Mr. VanDyke would not say affirmatively that he would be fair to any litigant before him, notably members of the LGBTQ community."

"That was the part of the letter. ..." He paused, his face strained with emotion as he clearly struggled to steady his voice.

"I did not say that," said VanDyke. He paused yet again, exhaled audibly, and continued, tearfully.

"No, I did not say that. I did not believe that," said VanDyke. "It is a fundamental belief of mine that all people are created in the image of God. They should all be treated with dignity and respect, Senator."

"Can you commit today to this committee that, if confirmed, you will treat every litigant who came before you with respect and with dignity?" asked Hawley.

"Absolutely, Senator," said VanDyke, with tears now visible on his face. "I would not have allowed myself to be nominated for this position if I did not think I could do that."

"Including members of the LGBT community and any other community that has been historically disadvantaged in this country?" asked Hawley.

What VanDyke did not share with Graham was that the LGBT group he helped write a brief for was a small, obscure, Virginia-based group that "seeks to educate" LGBT people about "the principles of the free market, individual responsibility, and noninterference by government in the private lives of all citizens." That group, Gays & Lesbians for Individual Liberty, took sides with a Christian campus group that sought to bar LGBT people from its membership unless they shared the group's religious view against homosexuality.

Lambda Legal Defense and Education Fund, the Human Rights Campaign, the American Civil Liberties Union, and every other LGBT group that submitted a brief in the case, Christian Legal Society v. Martinez, sided with the public university's policy of non-discrimination. The U.S. Supreme Court ruled 5-4 that the university's non-discrimination policy did not violate the Christian student group's First Amendment rights.

Little to no attention was paid to Bumatay. Senator Dianne Feinstein (D-California), who blunted told VanDyke she would oppose his nomination because of his opposition to gun control and the rights of LGBT individuals, told Bumatay that she "appreciated the diversity" he would bring to the bench but said she doesn't think he has the experience needed for the appointment.

Feinstein and Senator Kamala Harris (D-California), who was not present during Wednesday's hearing, both sought to use a traditional "blue slip" procedure of the judiciary committee to stop Bumatay's nomination from proceeding a year ago. (Harris is seeking the Democratic presidential nomination.)

Bumatay, 41, worked in the White House Office of Legal Counsel under President George W. Bush and has worked as a federal prosecutor in San Diego since 2012.

During his opening statement Wednesday, Bumatay introduced the committee to his parents, his sister, his brother-in-law, two nephews, and Alex, "my husband." He noted he and Alex also had with them their two daughters, who were born in April. The daughters prompted a remark from Louisiana Republican Senator John Kennedy, who called them "precious."

In his opening statement, VanDyke nodded toward Bumatay and referred to him as his "friend, Patrick."

Graham asked VanDyke whether he thought he could be fair to Bumatay should Bumatay come before him as a judge. VanDyke said, "I sure hope so. Yes, I would."

"Hey, Patrick," said Graham to Bumatay, "do you think he could be fair to you?" Bumatay's response was not audible.

"Mr. VanDyke, do you have any personal animus against LGBT persons?" asked Lee.

"None at all, Senator," said VanDyke.

"Could you adjudicate cases in which they're involved impartially and without bias toward or against any of them?" Lee asked.

"You wouldn't be influenced in any way on the basis of their sexual orientation or gender identity?" asked Lee.

"I would not, Senator," said VanDyke.

Lee told VanDyke that the ABA "has essentially called you a homophobic bigot," a characterization that Lee called a "deeply serious accusation." But Lee said the accusation has "no apparent basis in fact."

Lambda opposing VanDyke
Lambda Legal has not indicated whether it will support Bumatay's nomination. If confirmed, he would become the second openly gay person appointed to a federal appeals court. The first was Todd Hughes, appointed by President Barack Obama to the U.S. Circuit Court for the Federal Circuit and confirmed by the Senate in 2013 by a 98-0 vote.

A Lambda Legal spokesperson said the organization "strongly" opposes VanDyke's confirmation, and it also is leading opposition to Trump's nominee for another appeals court.

Lambda Legal and 20 other organizations signed onto a letter October 28 opposing the nomination of Steven Menashi to the 2nd Circuit, which covers New York, Connecticut, and Vermont. The letter said Menashi, 40, has, through his "personal writings," demonstrated "animus" toward LGBT people and people with HIV.