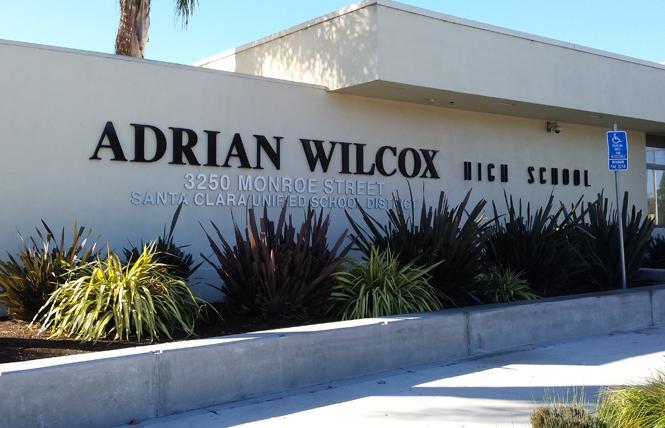 Some Adrian Wilcox High School football players have faced discipline from school officials, but they will not face criminal charges, the city of Santa Clara said Monday in a news release.

The school and the police department conducted investigations after allegations of physical harassment of an unidentified 14-year-old male cheerleader and another unidentified female cheerleader during a prep rally leading up to the game October 18. The homophobic atmosphere culminated in an alleged anti-gay chant by some Chargers' football team members at the Friday night home game against Milpitas High School.

The Mercury News and https://www.outsports.com/2019/10/24/20930665/gay-male-cheerleader-twitter-wilcox-high-school-santa-clara-california Outsports reported that the male cheerleader identifies as gay. His name is not being released because of his age.

In a statement November 4, the Santa Clara Police Department said it had concluded its investigation.

"Based on the information provided by the involved parties and after careful consideration of the law, the actions of the involved students do not rise to the level of a criminal violation," the statement said.

"Although not deemed criminal in nature, behavior that is hateful, threatening, and mean-spirited has no place in our community," the statement added.

The school's investigations were "concluded," October 24. The statement included a letter to the community from the high school's principal, Kristin Gonzalez.

The Mercury News reported that a criminal investigation is ongoing.

Santa Clara Police Department Captain Wahid Kazem told the newspaper that he wanted to "make sure with regards to the criminal aspect that we do a thorough investigation."

He expects the investigation to wrap up early this week. Investigators will deliver their findings to the Santa Clara County District Attorney's office. The DA will review the case to determine how to proceed.

The Mercury News reported that Wilcox is facing some disciplinary actions from the district, but details weren't revealed by the district or the school.

NBC News reported that administrators and authorities were sifting through rumors and witness accounts.

The incident left the family of the bullied male cheerleader feeling "fearful for his safety — now more than ever," his father told the Mercury News. The boy had allegedly endured harassment for a month leading up to the incident. The boy's sister, who was the squad's former captain before graduating, took her brother home at halftime on the night of the incident, the paper reported. Later that evening she tweeted a warning to the football team and an image of a cake that said, "We love that you are gay!"

Despite the homophobic taunts, the freshman returned to school October 21, but he did not attend school last Tuesday because his father wasn't certain that his son would be protected, he told the Mercury News.

The father, who was not identified, called his son "courageous."

"He has a responsibility to his team and to the school. He's out there to cheer the football team and this is what they do," the father told the newspaper.

A football player who provided screenshots of the incident to the family was also allegedly threatened by his teammates, reported the paper.

The father said that if the school doesn't properly handle the investigation, he will enroll his son in a different school, he told the newspaper. Other parents have also made similar statements in the comments on the change.org petition calling for justice for the cheerleader that reached more than 9,000 signatures as of Saturday.

Students, teachers, parents, and LGBT organizations have rallied behind the boy.

Disappointment and outrage
Wilcox won the October 18 game 49-21 and is undefeated this season. Last season it won a state championship, the Bay Area Reporter noted in an earlier article.

Instead of answering the questions, Gonzalez and the district are focused on moving forward.

"I feel that it is critical that we begin the healing process," Gonzalez wrote in the letter to the community.

"From a disciplinary standpoint, the school has taken the actions available given the facts of the case, which range from removal from athletics to suspension from school," she continued.

The district reiterated its and the school's no tolerance policy for "harassment, bullying, or retaliation of any kind," in Thursday's statement.

"The high school years tend to naturally be interesting years, but they should never be years of pain and heartache," Gonzalez wrote in her letter.

"They should be a time of learning, joy, and innocence as you prepare to take the first major step towards adulthood," she wrote, reiterating that the school "will never tolerate bullying or harassment of any student."

Gonzalez pledged support for students who are bullied or victims of harassment at the school.

She stated that moving forward the school "will be working collaboratively with our students, staff, and families on activities and bringing diversity experts to campus to act as a resource in assisting our community in the healing process."

Jennifer Dericco, public information officer for the district, confirmed to the B.A.R. there is an LGBTQ+ club on campus that will be working with the school's leadership.

Adrienne Keel, director of the LGBTQ programs at the LGBTQ Youth Space in San Jose, was critical, calling for the school to "be more transparent."

"Our staff were angered by the news of what this student experienced," wrote Keel in an email interview with the B.A.R. "He deserves to feel safe doing what he loves and representing the school.

"I ask the leadership and faculty at Wilcox to lean into their potential discomfort and actually do the work to address toxicity that exists on their campus," Keel wrote, responding to the district and the school's statement. "Preserving the school's reputation should not be the primary focus at this moment."

The space is a part of Family & Children Services of Silicon Valley, a division of Caminar.

San Francisco-based GSA Network didn't confirm if the school has a GSA program or respond to a request for comment by press time.

The Santa Clara Office of LGBTQ Affairs also didn't respond to a request for comment by press time.

>b>Updated, 11/4/19: This article has been updated with results of the police investigation.