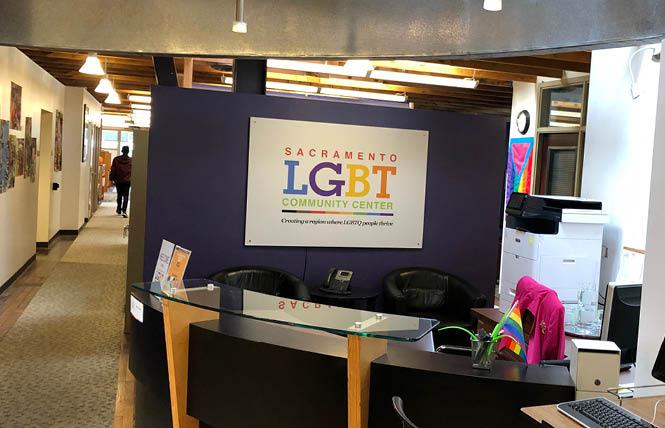 The Sacramento LGBT Community Center doubled its space by leasing a new location last month — and is planning to double again by buying a more permanent location.

David Heitstuman, a gay man who is the executive director of the center, said that the need for more space tracks with the growth of his organization.

"Over the last three years, we've grown from 10 employees to 34," Heitstuman said. "There wasn't a place enough for us all to sit — let alone for confidentiality."

The center reopened in the new location September 5. At 6,000 square feet, it is located adjacent to Faces Nightclub at 2012 K Street (at 20th Street) in Lavender Heights, Sacramento's LGBT district.

The old location was one block away, across the street from the Mercantile Saloon. The center is eyeing a new location nearby that is 11,000 square feet.

"This is to help bridge the gap between the old space and the new permanent home," Heitstuman said.

The center has taken on a lot of responsibilities in recent years, as the capital city has been expanding at a rate that made it the fastest-growing big city in California, according to state statistics, with an estimated population this year of 509,082.

In addition to running the Sacramento Pride parade and festival, a youth program for LGBT youth called the Q-Spot, a Q-Prom for LGBT youth, and the Mama's Makin' Bacon Drag Brunch, the center provides four housing programs.

"There are over 700 names on the waitlist of youth who need housing with Sacramento Steps Forward," Heitstuman said. "Of these, we know 30%-40% of homeless youth in Sacramento are LGBTQ.

"So the need for beds in Sacramento far outpaces the supply," he added.

In addition to motel vouchers where LGBT victims of crime can escape either homelessness or an unsafe environment, the center also runs short-term and transitional living programs.

The short-term housing, called STEP, is located near the center in midtown Sacramento and has a total of 12 beds. LGBT victims of crime between the ages of 18 and 24 stay an average of 90 days.

The transitional housing, called TLP, is located in the South Sacramento neighborhood of Oak Park. Up to six LGBT victims of crime or housing instability can live there, in addition to a part-time, live-in house manager, for up to 24 months.

People living in TLP are expected to be working or in school.

"It may be that someone goes to school and they came out and so their parents cut them off but they want to keep going," Heitstuman said.

The California Office of Emergency Services and the City of Sacramento provide the funding for these programs. The center's budget is about $1.2 million, according to its 2017 IRS Form 990.

In August, the center also launched a pilot project of Host Homes. Host Homes, which the San Francisco LGBT Community Center is starting a version of, seeks to pair an adult with a transitional age youth (18-24) in need of housing.

Hosts in Sacramento can expect to receive a stipend of up to $400 per month, something that is not currently available in the San Francisco version.

The Q-Spot drop-in center, which is open from noon to 6 p.m. daily, is a place LGBT youth ages 13-24 can socialize, relax, or get tested for HIV.

The center was founded in 1978 as the Lambda Community Fund. It was a check from — ironically enough — the late Reverend Jerry Falwell that allowed Lambda to open the community center.

Falwell claimed in a television interview that he would give $5,000 to the Reverend Jerry Sloan if Sloan could prove Falwell had made certain derogatory remarks about the Metropolitan Community Church, a Protestant denomination that was started by a gay man, the Reverend Troy Perry, and caters to the LGBT community.

After a lawsuit, Sloan was paid and used the money to open the center, which was renamed the Sacramento Gay and Lesbian Center in 2006, and is now the LGBT community center.

It was around the time Trump was elected that Julie Kleinbach came out as a transgender woman and became involved volunteering with the center.

"From the outside people think our community is somewhat united, and that's sort of true, but the reality is you don't get many spaces where trans people, gay people, lesbians, bi folks, and nonbinary folks get together," Kleinbach said. "That's true for all sorts of reasons, but the center has facilitated that (unity)."

Kleinbach said that this intermingling of different people has allowed her to educate older, gay men about issues affecting the transgender community and, conversely, has allowed them to educate her about the 1970s fight for gay liberation and the subsequent fight against HIV/AIDS.

Kleinbach said she met her current partner at the center while volunteering for the annual Pride awards it hosts.

Heitstuman said that the center hopes to have the new location to announce soon.