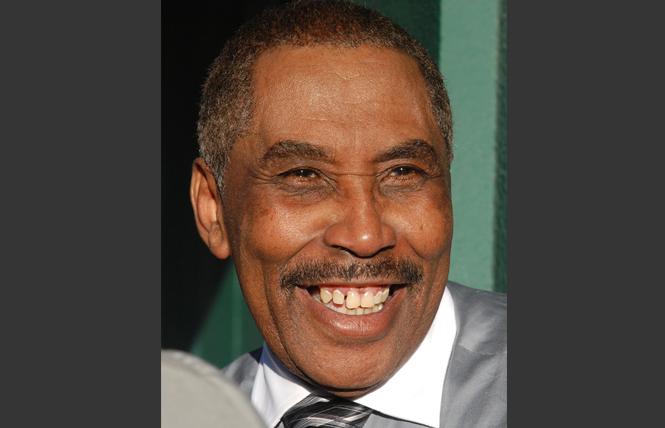 Vern Stewart, a gay man who produced leather contests and was known for his photography, died September 26 at his home in Washington, D.C. He was 77.

Friends said that Mr. Stewart suffered a sudden stroke brought on by complications from peripheral vascular disease. In the end, Mr. Stewart was granted his wish to remain in his home, proudly independent just as he had lived his entire life.

For over 50 years, Mr. Stewart was a trailblazer, photojournalist, and mentor across the gay, leather, and African American communities. As a writer, columnist, and photographer, Mr. Stewart judged hundreds of leather men and women's contests worldwide. He was a former co-producer of American Brotherhood Weekend, International Drummer Weekend, and the "Great Buns" calendar in San Francisco.

Mr. Stewart's weekly column, and later blog, "Musings by Vern," was enjoyed by readers worldwide. Mr. Stewart was a recipient of the Pantheon of Leather Lifetime Achievement award. In 2011, he was a judge for the International Mister Leather contest in Chicago. Mr. Stewart produced the Mr. New York Eagle contest until the time of his passing.

According to an obituary prepared by his friends, those who truly knew Mr. Stewart (affectionately named "The Wicked Witch of the East") understood the impact he had in nurturing and developing future generations of leaders who carry on the legacy and history laid down by those who came before them.

"It is not an exaggeration to say that Vern quietly mentored hundreds of leather community leaders across the world today," close friend and confidant Paul Christensen said.

Together with his best friend, the late Bay Area Reporter leather columnist "Mister" Marcus Hernandez ("The Wicked Witch of the West"), Mr. Stewart would serve up the dish, call out names when wrongs needed to be made right, and keep the community on its toes laughing and fighting for our communities and for those in need, friends said.

"Vern's passion for preserving our history was lifelong, dedicated, and unwavering," Christensen said.

Mr. Stewart was a private person, but he did share his history with the few he held close. Born in Cleveland, Ohio on May 17, 1942, Mr. Stewart was raised in San Francisco, going to school in what was then the working-class Castro district, a neighborhood that would look very different just a few decades later. Mr. Stewart remained close with his family over the years, visiting his mother, Lily Robinson, his uncles, and cousins in Chicago when time permitted.

Mr. Stewart loved travel and adventure, and as a young man he started his first job with Transamerica Airlines in San Francisco. A few years later, he seized an opportunity to move to New York City working for Saturn Airways — his first day of work happened to fall on Judy Garland's death on June 22, 1969. Vern stood in line for five hours to see Garland lie in state. A few days later, as he was walking down the street in Greenwich Village, he heard a commotion and stopped to help a man who lay bleeding on the street until an ambulance could arrive. Little did he know the events that surrounded him that day would eventually be known as the Stonewall riots, a pivotal point in the modern gay rights movement.

Mr. Stewart left Saturn Airways for Ozark Airlines in Iowa, Chicago, and Philadelphia. At each new city, friends said, he developed lifelong friendships, but also experienced the hate of being an openly gay African American man. Fiercely independent, Mr. Stewart learned to challenge the world through his laughter, intelligence, and drive.

A new job with World Airways brought Mr. Stewart back to his beloved San Francisco, now with a vibrant and openly gay leather community where he found home. He secured an apartment back in the Castro — across the hall from the famous singer Sylvester. In his off hours, Mr. Stewart managed the Watering Hole bar in the South of Market neighborhood.

Mr. Stewart owned a motorcycle and loved to give friends rides across town. One of his regular passengers was his friend, Jose Sarria, the first openly gay person in the world to run for public office and who would later form the vast nonprofit Imperial Court system. Mr. Stewart would pick up Mr. Sarria from his day job at a print shop in the Mission district, deliver him to his night job as "the nightingale of Polk Street," and then back home late at night.

Using his connections at the airlines, Mr. Stewart arranged charter flights from San Francisco to Chicago for the first few years of the IML contest. It was through this that he met Chuck Renslow, the founder of IML, and their friendship continued until Renslow's passing in 2017.

Mr. Stewart's work eventually took him from San Francisco to Utica with BEX Airlines and then to American Airlines. His retirement from the airline industry brought him to Washington, D.C., where he lived for many years, supporting the local communities in the district; Baltimore; Rehoboth Beach, Delaware; Philadelphia; and New York City.

"In my lifetime I have found precious few people who are truly down to earth — for real — no-bull type of people," said longtime friend Queen Cougar, also known as Colleen Bogitini and who works in administration and advertising at the B.A.R. "Vern was the epitome of all that. You could always depend on him to give you the real deal of a story. Having people like Vern and his 'older sister' Marcus in our recent past seems cruel, as if our leather parents have left us all too soon."

His friends said that Mr. Stewart's number one goal was to make sure that future generations of leather men, women, boys, and girls were aware of their rich leather history. He believed in telling it like it is in his "take no prisoners" style of training and educating those who will carry on the traditions and the leather lifestyle. Before his death, Mr. Stewart took steps to ensure that his legacy and life of photojournalism would be preserved for future generations.

In addition to many friends and chosen family, Mr. Stewart is survived by several cousins, including Haven Robinson, Jeannette Wooden, and Denise Robinson.

Per Mr. Stewart's wishes, memorial celebrations will be held on both coasts. In San Francisco, a celebration of his life will be held Sunday, November 10, from noon to 3 p.m. at the SF Eagle, 298 12th Street.

A memorial video is being prepared to celebrate Mr. Stewart's abundant life and friendships worldwide. Friends are asking for any pictures to be emailed to be included in the presentation to msqcougar@comcast.net.