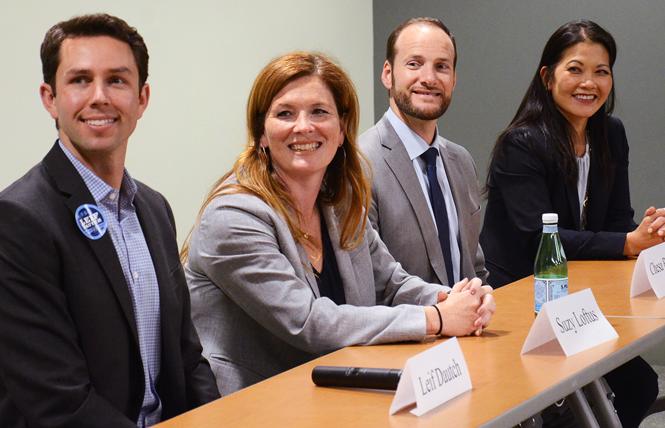 A debate among the four candidates for San Francisco district attorney was civil for the most part, but near the end the two leading contenders squabbled over the mayor's recent action appointing candidate Suzy Loftus interim DA.

Loftus will replace George Gascón later this week. He resigned two weeks ago to move to Southern California to reportedly explore a run for DA there.

The October 14 forum was held at CPMC Davies Hospital conference center in the Castro and was sponsored by the Duboce Triangle Neighborhood Association.

"The mayor tried to throw her weight into this race," progressive candidate Chesa Boudin said. "She said something really telling when she appointed Suzy. She said 'I need a district attorney I can work with.' The voters want and deserve a district attorney that they trust, that works for them."

Loftus shot back that she has the confidence of more than just the mayor.

"I'm proud that so many people across San Francisco have selected me as their choice to be the next district attorney because I'm someone that they trust. I started running against the status quo over a year ago," Loftus said. "It has been that approach that has earned me the support of eight members of the Board of Supervisors."

Loftus announced she was running for DA before Gascón said he would not seek re-election.

Boudin said that voters should take advantage of a time when the law and order approach to crime is being replaced by more rehabilitative strategies.

"It's the first time in our lifetimes that a lot of people are thinking that the status quo in criminal justice isn't working," Boudin said. "We need to seize this moment."

Loftus, currently counsel for the San Francisco Sheriff's Department, is the preferred candidate of many in the city's Democratic political establishment, including Democratic presidential candidate Senator Kamala Harris, herself a former San Francisco DA and whom Loftus worked for when she was state attorney general. Boudin, a deputy public defender, has racked up endorsements from more left-wing individuals and groups like the Harvey Milk LGBTQ Democratic Club and national activists for criminal justice reform such as Shaun King and progressive supervisors Matt Haney and Hillary Ronen.

This is the first open race for DA in a century, but Breed's appointment of Loftus to the position of interim DA led to much criticism from the Milk club, the American Civil Liberties Union, and others. Critics said the mayor should have waited until after the election or appointed someone who was not a candidate in the race.

Low morale
At Monday's forum, all four candidates agreed that the DA's office has languished under the leadership of Gascón with low morale and experienced prosecutors leaving.

Candidate Nancy Tung lives in San Francisco but works as a deputy district attorney in Alameda County. She used to work at the San Francisco DA's office.

"What we see in our streets we know is not working," she added.

When the forum opened for questions from attendees, Duboce Triangle resident Yvonne Mere asked the thoughts of the candidates on Proposition 47, a measure that was passed in 2014 that reduced penalties for some offenses, such as for drug possession.

"If you talk to the police department their position is that they have lost a lot of tools that they had pre-Prop 47 to address some of the crimes that make us very nervous," Mere said. "I live in this neighborhood. I am scared to go out at nighttime by myself. I lived in New York for many years. My parents live upstairs. This has gotten very bad, very quickly.

"I appreciate all of your comments but I'm looking for something a little more specific," she added.

Loftus said she can relate, being "grounded in San Francisco" herself and having her kids taking public transportation.

"I have so many families telling me 'depending on the outcome of this race and whether we have a leader who takes this seriously, I may not stay in San Francisco,'" she said.

But Loftus didn't go so far as to say that Prop 47 needed to be repealed.

"In other counties where law enforcement worked with the community, property crime went down," Loftus said. "When you took that stick away there wasn't another strategy (in San Francisco)."

Boudin said that many of the street crimes that people worry about are related to mental health or drug addiction, and that police are often unfairly called upon to deal with these even though they have not been specifically trained to do so.

"We ask them so often to be the front line in mental health crises," Boudin said. "We are treating the jail as a revolving door. No wonder the police are frustrated."

Loftus said that the DA's office often doesn't prosecute cases that need addressing, such as property crime, because of "a downward spiral of learned helplessness from the system."

All of the candidates said that they would try to find ways to enforce laws protecting the environment after an audience questioner brought up a Board of Supervisors resolution sponsored by gay District 8 Supervisor Rafael Mandelman declaring that San Francisco is in a climate emergency.

Prior to the forum, candidate Leif Dautch, a deputy state attorney general, told the Bay Area Reporter that he's campaigning to reach all voters.

"I'm very interested in what the community cares about because every neighborhood has different concerns," Dautch said.

He said that the focus of his campaign just happened to coincide with the three top concerns he heard from Duboce Triangle residents — vehicle break-ins, homelessness, and mental health.