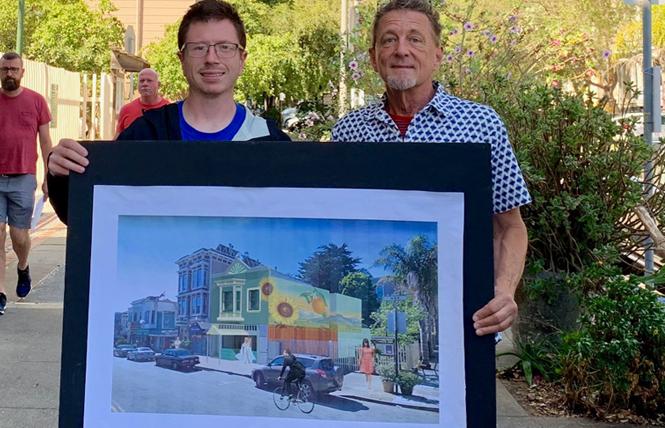 The Castro will have a third cannabis dispensary thanks to a 4-0 vote last week by the city's planning commission allowing the Flore Store to open at 258 Noe Street.

The site is currently occupied by Gloss 'n Glam nail salon and is across the street from Flore, the funky cafe where the late Dennis Peron, a gay man, and the late Mary Jane Rathbun, aka Brownie Mary, met regularly two decades ago to plan the legalization of pot.

The planning commission voted October 10 to allow Terrance Alan and his business partners to begin renovations on the 798 square foot storefront that will become a cannabis retail store next year. It will be the third place residents can legally buy cannabis in the neighborhood, in addition to the Apothecarium's flagship store at 2029 Market Street and Eureka Sky at 3989 17th Street, adjacent to Jane Warner Plaza. That location is still undergoing interior renovations, following planning commission approval in June.

The Flore Store vote was 4-0 with gay Commissioner Dennis Richards recusing himself because he lives within 500 feet of the new dispensary. Commissioner Kathrin Moore was not present. The vote could still be overturned if neighbors appeal to the Board of Supervisors, which happened with a cannabis dispensary in the Sunset, when neighbors organized to convince the city to veto its application.

"We are thrilled with the unanimous vote of approval," Terrance Alan told the Bay Area Reporter outside the commission meeting at City Hall. "I want to thank all our supporters, including the neighborhood residents and businesses who agreed that the business would be a positive addition to the Castro."

The dispensary will be the Flore owners' second foray into the cannabis business. In 2017, the cafe launched a menu of non-psychoactive CBD-laced beverages, but was shut down by the city, which ruled it was in violation of Proposition 64 regulations for the sale of cannabis.

While the overwhelming majority of testimony was in favor of the new dispensary, it wasn't without detractors.

Speaking on behalf of the Duboce Triangle Neighborhood Association, David Troup, a gay man who heads the group's land use committee, outlined its objections.

Following 16 months of negotiations and meetings with the sponsors of the proposed Flore Store, DTNA supports the proposal but only if the dispensary agreed to a list of 12 conditions, most of which were approved by the planning commission.

Troup noted that some members of the land use committee have "great distrust" that the owners of the new dispensary would stick to their written plans for the space. According to Troup, "past behavior" of the sponsors of Flore Store has made DTNA members "suspicious" that the owners would keep their promises.

Other conditions demanded by DTNA and agreed upon by Flore include a promise not to ever apply for a permit to have consumption on the premises.

DTNA member Cathy Lew noted that there have been "years of trouble" around the community garden adjacent to the new dispensary, which she said had become a regular location for "drug deals."

"I doubt if a pot shop will be an improvement over a nail salon," she said. Dispensary sponsors have promised that a camera surveillance system would be installed but "my neighbors are skeptical" that they would follow through, she added.

Nail salon
The DTNA committee noted that the dispensary would displace the nail salon from its existing location and asked that Flore Store promise to help it find space to relocate. The owners of Flore Store and the DTNA committee have disagreed about whether the nail salon had decided not to sign a lease or the dispensary was given priority by the landlord. The owner of the salon would not comment on the dispute.

"It was really important to us" that the dispensary promise to help this existing business to stay in the neighborhood, said Troup.

Last month, the tenant at 258 Noe would not comment on the situation. In a phone interview with the B.A.R., tenant Daniel Nguyen, whose mother, Mary Ann, operates Gloss 'n Glam, said the family preferred not to discuss the neighborhood dispute over the property they have been leasing. Nguyen did say, however, that the salon is looking for space elsewhere in the neighborhood.

Dr. Robert A. Bush Jr., a gay man and DTNA board member, said, "most neighbors would've preferred the new dispensary to be located on Market Street" because the Noe Street location is the "doorstep of our residential neighborhood."

More than a dozen people spoke on behalf of Flore Store, including Castro Merchants President Masood Samereie, who noted that the group's membership voted to back the new dispensary.

Activist "Chicken" John Rinaldi, who is involved with the arts and Burning Man communities, backed the proposal. Rinaldi said he lives a block from the planned dispensary and has children who walk by the location "four times a day." Rinaldi said he did not understand neighborhood concerns that a dispensary would exacerbate the problems of drug use and homelessness in the area. The dispensary will "neither increase nor solve those problems," he said.

Following the commission's vote, Alan emailed the dispensary's supporters, announcing that it would be raising money to pay for build-out of the new business.

"We are creating small investor ownership opportunities," Alan wrote. Investors — who would become part owners — would enjoy discounts and priority access to invest in new locations. Details about investment opportunities will be announced soon, said Alan.