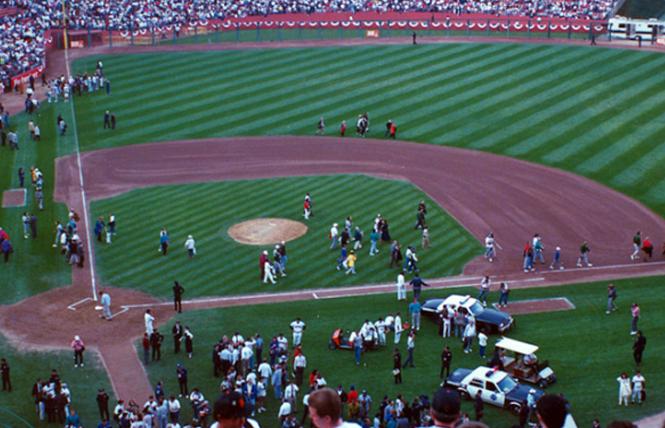 People milled about on the field at Candlestick Park after the Loma Prieta earthquake interrupted Game 3 of the World Series between the San Francisco Giants and Oakland A's on October 17, 1989. Photo: Courtesy Together We're Giants

My mainstream sports journalism career reached its apex 30 years ago today — October 17, 1989 — when the Loma Prieta earthquake rumbled through Candlestick Park just minutes before the scheduled start of Game 3 of the 1989 World Series between the San Francisco Giants and the Oakland A's.

Lives were lost and lives were shattered that Tuesday evening three decades ago, so in the grand karmic scheme of things, I've got nothing to complain about.

All of us who were in the Bay Area that day, who watched as neighborhoods blazed away, bodies were pried from beneath collapsed concrete-and-rebar highways, and the chaos of desperation snarled crowded surface streets — we all have our personal recollections of the day's moments of heroism and tragedy. Allow me to share with you some of my memories.

I had moved to Los Angeles a little more than three years before, after spending the previous nine years as a journalist in Alaska, to become a features writer in the Los Angeles Herald Examiner sports department. I'd had a great job as a sports editor at the Anchorage Daily News, working with a talented staff and a management team that encouraged boldness and creativity; at the Herald Examiner, I found another staff deep in talent and boldness, but this time was freed from administrative duties, so I could explore writing assignments to my heart's content.

At the time, Los Angeles was close to being the center of America's major pro sports universe. The city had swiped the Raiders from Oakland and the Rams were just down the road in Anaheim. The LA Kings traded for hockey superstar Wayne Gretzky, Lakers' Showtime was dominating the NBA behind Magic Johnson and Kareem Abdul-Jabbar, and in 1988 the Dodgers stunned the A's for the World Series championship behind the irrepressible Orel Hershiser and a single amazing swing from Kirk Gibson.

I got to cover all of that and more, from a Pulitzer Prize-nominated series on "Death and Disability in Football" to the Super Bowl to the Summer and Winter Olympics. My front-page story on the Dodgers' World Series clincher was re-printed on a souvenir beer stein.

And that was just the beginning. In 1989, I debuted as a sports columnist during the NBA Finals on a trial basis, and then was selected to take over the three-dot column "Notes on a Scorecard" on November 1. So, I was riding high heading into the World Series.

We'd gotten through the first two games, both Oakland victories, with no problem. Before the start of Game 3, I was in a press bunker deep within the bowels of Candlestick Park, typing pre-game notes into my little laptop, which back then was not much more than a few bits of memory, a keyboard, a three-line LED screen, and a phone modem that would transmit my story back to the office at a snail's pace.

As the room jolted to the side and papers flew off the tables, I reached for a phone while out-of-state reporters began yelling, "What was that?" "What the eff do you think it is?" I yelled back as I dialed my office, praying I could get through before the lines went dead or were jammed. The office picked up and I got operating instructions to pass on to the other writers we had in town. As I hung up with my editor, Rick Arthur, I asked him, "Please call my parents to let them know I'm OK."

I went upstairs to the press box and talked with my colleagues, handing out assignments, grappling with the sense of disbelief that shocked us all.

At first, there was virtually no sense of distress, as most fans waited in their seats for the lights to come back on and play to commence.

Later that evening I wrote, "The fans cheered, and who could blame them? We have all known that moment of despair that comes during a major quake — that sudden fear that cuts through the heart when, as the room about us rolls and the floor below us goes mad, we realize that this may be the Big One. We also have shared that nervous moment of laughter afterward when, finding ourselves still upright in the building unscathed, we laugh at fate and our fears and prepare to go on with business as usual."

I prayed, as I always do after a big jolt from a quake, that I was at the worst of it and all was well elsewhere.

But then reports began trickling in and I was quickly told to drop my sports stories and return to my first profession — news reporter — to cover the scene in the streets.

I spent an hour trying to get out of the parking lot, flipping the radio dial to keep track of the incoming news reports. The estimated magnitude of the quake jumped from 6.9 to 6.5 to 7.0. It was centered in Fremont — no, Hollister — no, Santa Cruz. In flat tones, the radio spoke of homes on fire in the Marina district, a collapsed Bay Bridge, and the crushed double-decker freeway in Oakland. The dead were estimated to be at least in the hundreds and then in the thousands. Ultimately, of course, "just" 63 died and fewer than 4,000 were injured, but there was no way to know that as I crawled through intersections where volunteers tried to help move drivers along safely through the darkened streets jammed with commuters desperate to see what damage their homes had suffered.

"At some intersections there were flares and I quickly learned what that meant," I wrote that evening. "Huge gaps had opened up in the seams of the pavement where the earth had chosen to rearrange itself."

With the Bay Bridge knocked out, I knew I could not make it back to my motel in Oakland, so I decided to go to the Noe Valley home of a high school friend and his family. There he crouched with his wife and two daughters, huddled in candlelight around a transistor radio as they listened for alerts on this strangest of nights. The younger daughter was too young to know anything was amiss and thought it would be a good idea if we spent every evening like this; the elder girl was so distraught she decided to go to sleep out of sheer nervousness. I wrote my column with pencil on paper, then slowly dictated it over the phone to my office in Los Angeles.

"A lime-green candle colored the room and a portable radio gave a voice to the night," I told the re-write desk, whose task it was the get my words into print the next day. "As I write this, I don't know if there will be a game today. I don't know what this act of nature means to the Giants pitching rotation. I don't know who will start at shortstop for the A's. But I do care. It does matter. When the series resumes, it will mean that the process of picking up the pieces will have begun. And life will be getting back to normal."

The next morning, my friend and I went around his block, checking on the elderly and making sure their water heaters were securely braced. The news editors asked me to drive to Oakland to cover the Nimitz Freeway collapse. "I'll try," I told them, "but you can probably drive to it from Los Angeles faster than I can from San Francisco."

It took me hours, but I finally got to the Nimitz, where I went on a tour of the collapsed decks, the crushed cars, the twisted rebar sticking out from splintered pillars — rebar so grotesquely mangled it was evident that this earthquake has behaved in a way scientists had not predicted. So that I would never forget the moment, never forget that sports are all fun but this was sterner stuff, I picked up two small pieces of the Nimitz rubble. Stuck one in each of my pants front pockets.

The baseball decision was made then to continue the series, but having spent so much dreary time looking up at those crushed cars and rescuers searching them one by one, not knowing if people were still alive in them or how many bodies there were, I was not in any mood for it. In the Thursday paper, I commented on the reasons why the series should or should not be played.

"The 1989 World Series is dead," I wrote. "It died a death so monstrous and absolute there is no hope that it has a breath of life in it."

Eventually, the series resumed after an 11-day hiatus. With all of the rest that allowed the players, the A's were able to start their top two aces again to complete the sweep. Many sports journalists went home the day after the quake, vowing never to return to San Francisco. I stayed on for a few days, filling in for our beat reporters, but just before the games resumed, I left to go to Mexico for a feature story I had scheduled long before Candlestick got the shakes.

At the end of October, I wrote my feature story, to be run that weekend. On the very last day of the month, I sat down to write my first Notes on a Scorecard column.

It proved to be my last and only.

The paper was shut down — just one of the many great metropolitan journalistic dinosaurs to sink into oblivion in the past few decades. I rebounded to become a sports editor in Albany, New York, and then back in the Bay Area as an editor with the Oakland Tribune sports department. In 1995 I parted ways with daily newspapers as they began their long submission to newer technology and I began my journey through medical hell, reemerging on these pages still fighting the good fight.

Lordy, lordy, I had a helluva view from the top there for awhile. Thank goodness for those two rocks to keep me centered on reality.

Updated, 10/17/19: This column was updated to correct that the Los Angeles Herald Examiner was shut down, not sold as originally written.