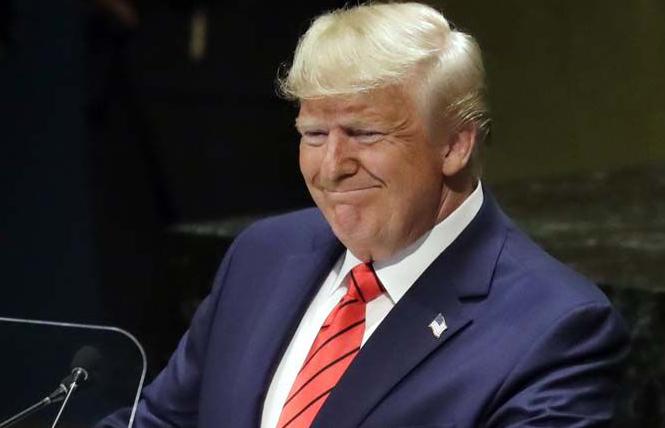 "My administration is working with other nations to stop criminalizing homosexuality," Trump told the assembly of world leaders during his more than 30-minute speech September 24. "And we stand in solidarity with LGBT people who live in countries that punish, jail and execute people based upon sexual orientation."

Trump's address mostly bolstered nationalism. "The future does not belong to globalists, the future belongs to patriots," he said.

OutRight Action International was critical of his remarks.

"Throwing in a reference to opposing the criminalization of same-sex relations while at the same time stating that the national supersedes the international, and that tradition and culture are sacred, is one more example of President Trump's hypocrisy," OutRight Executive Director Jessica Stern said in a statement.

Iran
The Trump administration's decriminalization campaign was reportedly inspired by the execution of a 31-year-old unidentified gay man in Iran in January.

Iran is one of the world's leading countries in executing gay and bi men, according to a 2008 British WikiLeaks dispatch cited by the Jerusalem Post.

Since the Islamic Revolution in 1979 the mullah regime has executed "between 4,000 and 6,000 gays and lesbians," the Post reported.

"Iran is one of the worst states for the persecution of LGBTI. The state publicly and regularly boasts of the execution of gay men," Axel M. Hochrein, spokesperson for the Hirschfeld-Eddy-Stiftung Foundation, which advocates for LGBT rights, told the Post earlier this year in a call for "increased efforts by the international community to help LGBTI people escape and provide safe asylum."

Tensions between the U.S. and Iran have been high this year.

Most recently, several countries blamed Iran for the September 14 attack on oil fields in Saudi Arabia.

In May, the U.S. pulled out of the Iran deal. During his speech, Trump continued to threaten strengthening sanctions if Iran didn't halt its attacks.

U.S. Ambassador to Germany Richard Grenell, the highest-ranking gay official in the president's administration, is spearheading the decriminalization campaign and has openly criticized Iran.

Leading up to the General Assembly meeting, Grenell began stumping for LGBT rights to appeal to European Union countries.

"Barbaric public executions are all too common in a country where consensual homosexual relationships are criminalized and punishable by flogging and death," Grenell wrote in February, reported NBC News.

"President Trump is fulfilling his initiative to decriminalize homosexuality across the globe," Charles Moran, managing director of Log Cabin Republicans, told the Washington Blade. "We are thankful that he will use this moment while addressing the world to call for the end of senseless persecution of LGBTQ individuals. President Trump is keeping his promises to the LGBTQ community, and for standing up for American values."

Global LGBT advocates were critical of Trump's advocacy of LGBT rights around the world when his administration has undermined LGBT rights at home.

The Blade reported that David Stacy, government affairs director for the Human Rights Campaign, said the president has "no credibility" on the matter.

In her statement, Stern noted the insecurity LGBT people around the world feel within their own countries because they are attacked "under the guise of tradition," she said.

"In all too many places, international standards have been the only avenue for LGBTIQ people to have our rights recognized, to seek remedy for crimes committed against us, and for pushing nations to accept that human rights belong to all, including, explicitly, LGBTIQ people," she said.

OutRight is the only global LGBTIQ-specific organization with a permanent presence at the U.N. in New York that advocates for human rights progress for LGBTIQ people.

Bianka Rodríguez was named the regional winner for the UNHCR Nansen Refugee Award for the Americas for her work on behalf of LGBT El Salvadorians, the UNHCR announced September 19.

The 26-year-old transgender woman is the president and executive director of Comcavis Trans, an LGBT rights organization based in San Salvador.

El Salvador is one of the world's most dangerous countries for LGBT people. They face extreme violence perpetrated by society and the government as well as discrimination.

Last year, there were 14 reported murders of transgender people in El Salvador.

A majority of the murders go unsolved due to "an overwhelmed criminal justice system not being able to respond," reported UNHCR.

Within the first six months of this year, Comcavis recorded 44 cases of trans people who were displaced internally due to targeted violence, even as an unknown number of others have sought asylum abroad, reported the UNHCR.

Rodríguez advocates for LGBT rights by lobbying officials and standing up for justice.

She is one of five regional winners from Africa, the Americas, Asia, Europe and the Middle East for the Nansen Refugee Award selected from more than 200 nominees.

The other regional winners include Evariste Mfaume, from the Democratic Republic of the Congo; Alberto Cairo, from Afghanistan; Abeer Khreisha, from Jordan; and Humanitarian Corridors, a cross-border Italian refugee initiative.

The honorees will be presented their awards at an October 7 ceremony in Geneva, Switzerland.

The Nansen Refugee Award is named in honor of Norwegian explorer and humanitarian Fridtjof Nansen, the first high commissioner for refugees. He won the Nobel Peace Prize in 1922 for his humanitarian work.

Doubt cast on investigation of Russian activist's murder
Russian activists and others are questioning a confession by a man who allegedly murdered a Russian LGBT activist.

LGBT Russian activists, a lawyer involved in the case, friends, and family all question the confession and Russian authorities' framing of the investigation's findings.

Authorities and state-run media outlets said Grigoryeva's killing was the result of a drunken disagreement between acquaintances rather than a hate crime. Russian media continues to smear Grigoryeva's reputation with stories claiming she was an outcast with a drinking problem, advocates said.

Those close to the murdered activist believe that Grigoryeva, a 41-year-old bisexual woman whom friends called Lena, was a scapegoat in a targeted political killing due to her outspoken criticism of President Vladimir Putin, according to RadioFree Europe/RadioLiberty.

They also believe they won't get the answers they demand from authorities, they told RFE/RL.

"I think it's immediately clear that this was a contract killing," Aleksandr Khmelev, a friend of Grigoryeva's, told the media outlet. "We've had them before."

Days before Grigoryeva's murder her name appeared on an LGBT hit list published by Pila (Russian for "Saw," named after the series of American cult horror movies), an anonymous network of anti-gay activists started in 2018. She also received death threats.

Following Grigoryeva's murder, and the outcry to find Pila's publishers, the site was deactivated. Authorities announced last month that a probe couldn't be launched into the homophobic site.

OutRight to host webinar
OutRight Action International will host a webinar about the global reach of so-called conversion therapy based on its recent groundbreaking report.

Amie Bishop MSW, MPH author of the report, "Harmful Treatment: The Global Reach of So-Called Conversion Therapy," and conversion therapy survivor the Reverend Nokuthula Dhladhla will speak about the report's findings and recommendations to challenge the practice of attempting to change a person's sexual orientation or gender identity. Conversion therapy has been widely debunked by researchers and the medical community.

The free webinar is open to the public and will take place Wednesday, October 2, at 11 a.m. Pacific Time. To register, visit https://bit.ly/2l9cIkI

For the Bay Area Reporter's article on the report, click here.