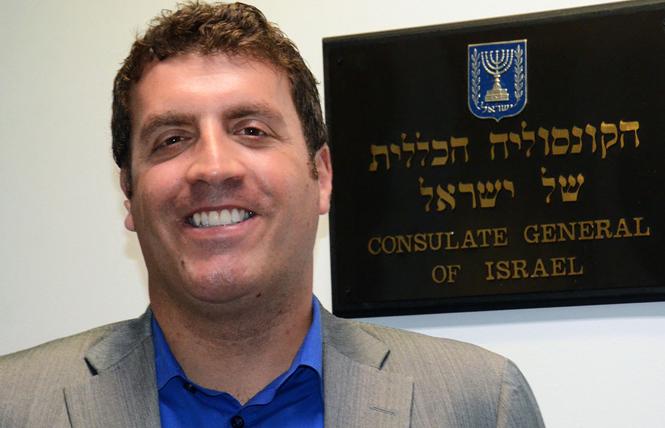 Matan Zamir, the deputy consul general of the Consulate General of Israel to the Pacific Northwest in San Francisco, started his new post August 1.

The consulate serves Israelis living in Northern California, Alaska, Idaho, Montana, Oregon and Washington, according to its website.

This is Zamir's second posting in the United States. He spent four years in Boston before returning to Tel Aviv for a year, where he assisted with Israel hosting and promoting this year's Eurovision Song Contest, the global music festival that Israel won in 2018. He also worked with Tel Aviv Pride.

Zamir, who turns 38 next week, and his American partner of nearly three years, Dylan Chuilli, 24, are excited to be in San Francisco. Zamir has already become a Warriors fan and the couple, who are avid wine connoisseurs, can't wait to explore California's wine country.

As an interfaith couple — Chuilli is a non-practicing Christian — Zamir told the Bay Area Reporter during an interview earlier this month that he looks forward to working with the San Francisco Bay Area's large interfaith community.

"One of the reasons I was extremely happy to come to San Francisco is because of the way that the community is working together," said Zamir, who said he participated in Boston's interfaith community.

Zamir enjoys traveling the world and discovering new places and people. It is one of his favorite aspects of his job.

"What I love the most is the opportunity to not only to visit a place, but to really live in it and get to know a culture that is extremely different than mine," said Zamir.

He is usually assigned diplomatic stints of up to five years.

Zamir enjoys the "sense of freedom" San Francisco represents, which he said is similar to Boston and Tel Aviv.

"I'm very lucky to live in places like that," said Zamir, who was born and raised outside of Jerusalem.

Vision and goals
Zamir has three main goals he wants to accomplish in his new role as the consulate's second-in-command. He wants to highlight shared Israeli and American values and work on business, especially entrepreneurship and technology; cultural exchanges; and humanitarian work.

Israel is known as the "startup nation" due to the country having the most startup enterprises per capita in the world, he noted. Israel is also the "technology innovation hub" in the Middle East, often called "Silicon Wadi," which means valley in Arabic, he added.

"Israel is the spirit of entrepreneurship," he said. It's not lost on him that "there are a lot of LGBTQ entrepreneurs whether in business and technology" or nonprofit organizations in San Francisco and the greater Bay Area.

Zamir also wants to bring more attention to Israel's development work aiding humanitarian causes through the Jewish belief, Tikkun Olam, which means repairing the world, he said. He believes that many Americans don't know the work Israel does around the world. Israel has helped Syrian refugees escape the civil war, fought wildfires in the Amazon and California, and aided Nepal following the 2015 earthquake, he said.

"Israel will be one of the first countries to send aid because that is the Israeli spirit," he said.

Becoming a diplomat
Zamir found his passion in international relations in 2011.

Prior to entering diplomatic work, he practiced civil law and worked for a time as an international business manager at a telecommunications company in Israel following a four-year stint serving in the Israeli Defense Forces.

"I loved the international work," said Zamir, about working at Israel's largest phone company, but he was searching for more.

"It seemed more natural for me to do international work ... around something that I'm also passionate about, which is the State of Israel," said Zamir, who applied to Israel's foreign ministry in 2010.

Zamir started his diplomatic career serving at Israeli consulates in Mumbai, India and Boston. In between international postings, he has worked at the ministry in Israel. During his last assignment he was charged with assisting with this year's Eurovision festival and Tel Aviv Pride, which was the country's largest with 250,000 pridegoers, he said.

Eurovision has "became an event that is very well recognized with the LGBTQ community. There are Eurovision parties in gay bars all over Europe and all over the world," he said.

This has been a stellar year for LGBT progress in Israel.

In addition to Eurovision and the traditional Pride events hosted in Jerusalem and Tel Aviv, Haaretz reported that there were 20 Pride celebrations throughout the country that attracted thousands of people — 11 which were new this year.

Not all Pride celebrations were welcome, such as in Ra'anana, where the conservative Orthodox community opposed the event.

Yet, the Ra'anana Pride parade pointed to Israel's future for changes in attitudes toward Israel's LGBT community as many of the marchers were under 21, Haaretz noted.

Tuesday's runoff election left Netanyahu, who has been prime minister since 2009, and his ruling Likud Party in a dead heat against challenger Benny Gantz of the Blue and White Party. Both men are reportedly jockeying for the endorsement of smaller parties.

It's a part of the "amazing progress" Zamir likes to point to in politics and Pride celebrations that have garnered the country international recognition for LGBT rights.

"In a tiny country like Israel is a huge deal. It just shows where Israeli society is, the status of the LGBT community is different than what it was 30 years ago," he said.

"Pinkwashing" is a term that activists use to describe countries and other entities using the LGBT community to mask other human rights abuses.

"I know for a fact that pinkwashing is a lie," said Zamir. "Linking the fact that the gay community in Israel can be who they are to the conflict with the Palestinians is a link that is artificial. We can talk about both things, but the link between them, in my opinion, is not there."

LGBT Palestinians are being persecuted by their own government authorities, he pointed out.

"If they look for a safe haven, when they look around, the only place they can run to is Israel," he said.

Israel is selective about Palestinians receiving asylum or refugee status in the country, Zamir said. But no matter what Palestinians' status is in Israel, the Israeli government provides them with social services.

Many times, LGBT Palestinians and other queer Arabs are forced to flee their homelands for their lives.

"Unfortunately, they can't be who they are in the West Bank and in some cases, unfortunately, in the Arab world," said Zamir.

He is proud that Israel is the only country in the Middle East that grants rights to the LGBT community to live openly and freely.

"Israel is the gay hub in the Middle East," he said about the country, which has a population of about 8.5 million people. "You can be very openly gay in Israel."

Yet, Zamir isn't blind to where Israel falls short when it comes to LGBT rights. He is fully aware that "it's not perfect yet," said Zamir, who is willing to have a dialogue with pro-Palestinian supporters.

"As long as we disagree and we do it respectfully I don't mind talking to them," he said, adding that the discussion would be especially good if "we have good results and find a mechanism to improve the life of the LGBT community in the West Bank. That would be amazing."

Kate Raphael, a member of Queers Undermining Israeli Terrorism, told the B.A.R. that a meeting with Zamir that includes Palestinians might be worthwhile.

"There have been years of dialogue between Israelis and Palestinians and unfortunately, Israeli government policies of stealing land and diminishing Palestinians' ability to live has not changed. It's not a problem of communication, but of power and oppression," she wrote in an email. "But if Mr. Zamir wants to discuss how he can best advocate with his government to recognize Palestinian rights to their land and for refugees to return, we would be happy to help set up a meeting that includes Palestinians."

"There are still targets for the LGBT community in Israel to achieve and they are fighting for it. They are fighting for it loudly and openly on the streets ... [and] they are lobbying," Zamir said, talking about last year's demonstrations when the members of Knesset didn't grant same-sex couples surrogacy rights within Israel yet granted straight couples the rights. "They are doing everything that they should do to get more rights, but it doesn't happen overnight."

Many same-sex couples seeking to form a family come to the U.S., particularly the West Coast, to work with surrogates due to being barred from being able to use surrogates and other reproductive technologies in Israel.

Zamir is hopeful that the new government and Knesset will pass pro-LGBT legislation.

The first piece of legislation to be passed could be to amend the surrogacy bill to include LGBT people, he said. Following that, legalizing same-sex marriage and other pro-gay laws could happen.

"I strongly believe that this is a piece of legislation that we are going to be seeing from Israel soon," he said, citing recent polls that show Israelis overwhelmingly support marriage equality.

Leading up to the election, A Wider Bridge, a U.S.-based Jewish LGBT American and Israeli organization, called for laws in the country around hate crimes, anti-discrimination, health care, and education.

Zamir confirmed members of the Knesset are working on legislation addressing these issues.

"I see a clear program when it comes to LGBTQ rights every year," he said. "You can't expect something like that to happen overnight."

Last month, A Wider Bridge and LGBT Israelis and Jews around the world commemorated the 10-year anniversary of the shooting at Bar Noar, a Tel Aviv gay youth center, on August 1, 2009. Two youth were killed, and many others were injured that night. The shooter was never detained. Israeli police haven't charged the shooting as a hate crime, reported the Jewish Telegraphic Agency.

Zamir recognizes that hate crimes are on the rise, not only in Israel and the U.S., but around the world.

"There is a very clear line between [disagreements on issues] and anti-Semitism and homophobia," he said. "It's our duty as Americans, as Jews, as Israelis to not to turn a blind eye to these phenomena's and to combat them.

"There is a strong potential for working together to promote international coalition of LGBTQ rights," he said.