Jock Talk: Hong Kong Gay Games may be in jeopardy 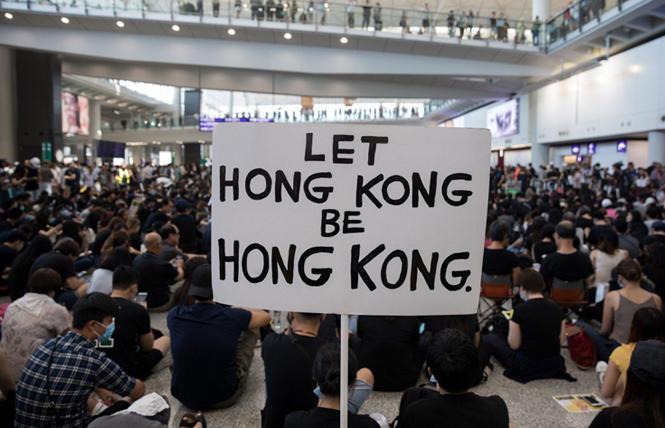 When Hong Kong was selected in 2017 to host the 2022 Gay Games, several Federation of Gay Games sports organizations and stakeholders expressed concerns that the changing political scene in the semi-autonomous Chinese province would complicate staging a successful event.

Now, after months of seemingly nonstop clashes between Hong Kong police and pro-democracy protesters, many Gay Games supporters are doubting the quadrennial event can be held there at all — with some calling for a decision as soon as early November.

"Canceling the Gay Games would be hugely disruptive and unfortunate," Ken Craig, a local martial artist and board member of both Team San Francisco and International Association of Gay and Lesbian Martial Artists, wrote in an email.

Craig said much would depend on the timing of such a move.

"If the announcement was made early enough to prevent financial losses on the part of attendees, then it would simply be an organizational challenge for the Federation of Gay Games as to why the games could not be re-located," he added. "If the games were canceled at the last minute, much as the Outgames in Florida were, it would be a catastrophe for LGBT international sporting events in general as it would encourage many to consider the FGG as inept and incapable as the (now-defunct) GLISA organization."

(The Gay and Lesbian International Sport Association was the licensing body for the rival World Outgames, which began with an event in Montreal in 2006 that lost millions of dollars and ended with a last minute cancellation in 2017 of the event in Miami because of financial and organizational mismanagement, leaving thousands of LGBT athletes stranded mid-transit and triggered the collapse of GLISA.)

Hong Kong games officials had already been scheduled to make a presentation in Guadalajara about their preparations. In the past couple of weeks, assembly members have formally asked that a "Plan B" be developed in case it seems necessary to relocate the event.

After FGG leaders and Hong Kong 2022 organizers met in person last May, they released a joint statement that preparations were going well, the hosts were working on security plans, and that they thought it was "premature to think about alternative host cities for the 2022 games. Federation of Gay Games and the Hong Kong Committee continue to stand by the decision to host the games in Hong Kong."


The FGG did not respond to questions from the Bay Area Reporter about what restrictions to moving the Gay Games there are in its license agreement or if any contingency plans have yet been drafted. Asked to comment for this story, Hong Kong 2022 reiterated its May reassurance that it is optimistic plans can continue to progress, it is premature to consider alternative hosts, and it is monitoring the situation.

Comments received this week from sports organizations and LGBT athletes indicate that not only is it now not premature to consider alternative locations and plans, but they have already started to do so — and the FGG should have had a Plan B from the get-go.

"The FGG should always have a Plan B for everything, because in today's climate, you just never know what could happen, political turmoil or natural disaster," Gus Penaranda, president of the International Gay and Lesbian Football Association, wrote in an email. "A Plan B is a smart thing to do. My understanding from speaking to many teams and clubs is that fundraising for Hong Kong will begin in full strength next year. So if there is to be the need for a Plan B, it should be identified and announced no later than July 2020 to allow the new host sufficient time to plan."

Penaranda wrote that around the time of the May meeting he advised both the FGG and Hong Kong 2022 about IGLFA's concerns, advising them that "for the U.S. (teams), the expense of going to Hong Kong is already an issue. The current political climate has added additional stress and IGLFA will not ask teams to travel to a country where their safety may be in question and risk possible loss of their investment."

Potential alternatives
Several cities originally bid to host the 2022 event. Guadalajara and Washington, D.C. were the other two finalists, and most organizations have told the B.A.R. they thought those two cities should be given preference if a new site is needed.

Washington's original bid would have had the event take place July 16-23, 2022. Several attendees at the bidder presentations said they thought Washington had the best presentation, but was hurt by international distaste for the election of President Donald Trump the year before.

Guadalajara was previously unknown to many of the voters, but it is the second largest city in Mexico. It has staged major international sports events such as the Pan American Games, is considered to be one of the gay-friendliest cities in the country, and would have been the first Gay Games in Latin America, which has a steadily growing number of LGBT sports clubs.

Voters have also indicated that although sports organizations overall preferred one of those two locations, the FGG board was strongly in favor of Hong Kong and the opportunity to enter the Asian market. 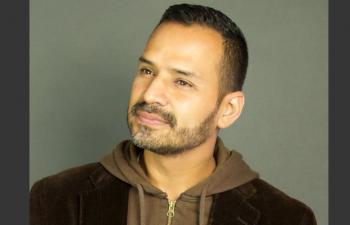 Ongoing discussions
Every LGBT sports organization contacted said it has had ongoing discussions on the Hong Kong situation; some of those conversations have been just among leaders, others have involved broader membership.

Gay and Lesbian Tennis Association President Dan Marrithew, for instance, sent out a recent message to members, writing, "Dear players: Understand some of you may have concerns with the recent situation in Hong Kong. As a local player born and raised [there], I can say Hong Kong is still very safe for now compared to many cities or countries as long as we are not trying to go to the center of protest area. Your tournament directors will pay extra attention and keep everyone posted in coming few weeks."

Marrithew lives in the U.S. but was born in Hong Kong and has friends there.

But concerns do not seem to focus on the possibility of protests being held at the time of the Gay Games. Organizational worries include the possibility of more repressive government crackdowns on individual rights being imposed; the Chinese government and the Hong Kong Legislature not being disposed to enthusiastically support the event; potential local corporate sponsors being reluctant to provide major funding after having been hurt economically by the current protests; and the uncertain status of the 2022 Gay Games making it hard for sports federations to raise funds, make plans, or recruit participants.

"IAGLMA's initial concern was Hong Kong's lack of previous engagement with FGG and therefore, lack of understanding the Gay Games philosophy," local martial artist Allen Wood wrote in an email. "This concern was elevated when they failed to send a representative to Gay Games Paris martial arts. The current political unrest is also a concern. We wonder what kind of distraction it is for the host city. We also wonder whether it is appropriate to have a Gay Games under a totalitarian government."

Waiting to try to make alternative plans such as moving, scaling down, or canceling the Gay Games would be a mistake, some sports representatives said.

"If the protests continue and/or escalate and the FGG or the host city doesn't act in enough time for an alternative site, it would harm the LGBTQ sports movement," Marrithew wrote. "Having an alternative host selected is not a bad idea. The alternative city would need plenty of lead time to ensure a well-organized event. I believe an announcement/ decision at the upcoming general assembly would be appropriate."

Protests
A March 31 demonstration in Hong Kong drew thousands of protesters into the streets to demand the Legislature, which is not chosen by Hong Kong citizens in a direct election, withdraw a bill it was considering that would allow Hong Kong residents to be extradited to mainland China, where the courts are controlled by the communist party and dissidents are dealt with severely. Since then the protests have grown vastly larger, some have been violent, and the demands have shifted to calls for investigations into police misconduct and the right to have direct democratic elections.

"My career and current position outside of IGLFA requires me to be current on the issues around the world," Penaranda, who is in the U.S., wrote. "I feel that now that the protests have become a political pawn for [Trump], China is going to want to put an end to it. This concerns me as we all should remember the last time people rose up against the Chinese government. Unfortunately, I am more confident that this situation will not end well."

"I do not have any confidence that the demonstrators' demands will be sufficiently or appropriately resolved politically, and have significant concerns that the Chinese government will interfere more directly and decisively to resolve the unrest in undemocratic and unacceptable ways," Craig wrote. "Ever since the 'umbrella' protests some three years ago, this unrest has been growing and festering within Hong Kong. It can only truly be resolved if China steps back from trying to control Hong Kong politically — or if China asserts itself irrespective of the promises it has made of 'one country, two systems.' I fear it will be the latter as China does not have a track record of backing down from political dissent and unrest. I hope for all concerned that I'm completely wrong."

The lead time for a Gay Games to come together makes it imperative that FGG act decisively and swiftly, sports representatives said. Normally, a host knows it has five years after it is selected to put the sports and cultural festival together. Chicago successfully did it in about 28 months for Gay Games VII in 2006 after being named to replace Montreal after Montreal quit prolonged licensing negotiations.

"A two-to-three-year minimum advance notice would likely be required for any alternative host to gear up, organize, and even attempt to host such a huge event," Craig wrote. "This would be especially true as I don't believe there is any current concept or process of having the runner-up in the 2022 bidding process as an official 'back-up' location should the primary host drop out or should they fail to meet prescribed milestones required by the FGG. I believe the FGG should ALWAYS have a back-up or contingency location, especially in light of the prior Montreal problems."

In a worst-case scenario, FGG would have no backup plan, the political turbulence would continue, and the Gay Games would be canceled.

In such a situation, sports such as tennis and football are likely to form their own international championships for 2022, while other sports are likely to be left out. Whether those championships would be held in one location or scattered, with the FGG's endorsement or without, would have to be determined.

"If everything is canceled and there is nothing planned for 2022, IGLFA has the ability to put together a tournament within a year and six months, so it could be done for soccer," Penaranda wrote. "If that were the case, I would reach out to my colleagues in the LGBTQ sports family and discuss options."

As Marrithew noted, "When the Outgames were canceled in Miami, we stepped up and still ran tennis for our players who traveled to Miami."

However or wherever the Gay Games are held, LGBT sports federations hope they go forward.

"All organizations understand that these tournaments are more than just competition," Penaranda wrote. "For many it is part vacation, part tournament. In those circumstances, the monetary commitment is high."

He also said other clubs are already deciding on attending other local tournaments instead of Hong Kong.

Penaranda added that there are "wonderful stories of individuals who have met their life partners at these games and are now families who support them. I do not think the FGG would cancel the games but if something like that does happen, it will be a difficult time for organized LGBTQ global sports."