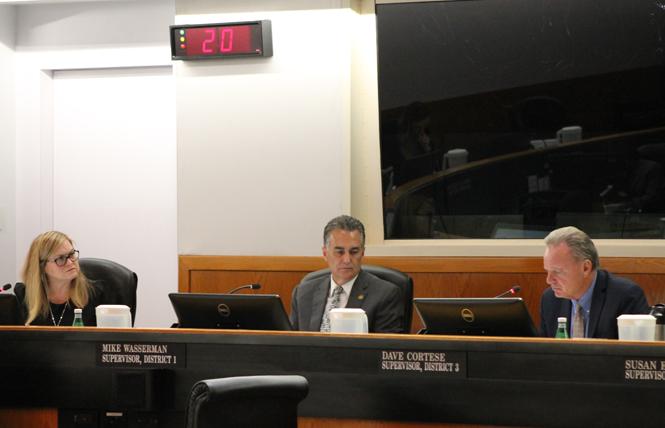 A South Bay task force on hate crimes became a reality after the Santa Clara County Board of Supervisors voted unanimously to establish it.

The task force will be charged with working with government agencies, community organizations, and individuals to tackle violence against vulnerable communities.

Board of Supervisors Vice President Cindy Chavez proposed the task force following the Gilroy Garlic Festival shooting in July where three people were killed and 17 others were injured. The gunman killed himself.

At their meeting, the supervisors all expressed a desire to move quickly, but also to work with federal to local government agencies and community organizations in an effort to discover the best ways to gather data, encourage people to report incidents, and address hate crimes.

According to California Attorney General Xavier Becerra's 2018 "Hate Crime in California" report, 58 hate crime incidents were reported throughout Santa Clara County, with 37 of those occurring in San Jose.

ABC7 News noted that there have been at least 19 reported hate crime incidents in San Jose so far this year.

Hate crimes are defined by the San Jose Police Department as "any criminal act or attempted act intended to frighten, harm, injure, intimidate or harass an individual, in whole or in part, because of the victim's actual or perceived disability, gender, nationality, race, ethnicity, religion or sexual orientation."

"We know that hate is a large overwhelming sentiment that will take the entire community to work toward ending," said James Gonzales, a gay San Jose police officer who is the LGBT liaison for the department. "We are happy to have all the help we can get; the task force bringing the community together to focus on this is a good thing."

Mike Gonzalez, the division manager for the Division of Equity & Social Justice who is also currently serving as the interim director of immigrant relations at the Santa Clara County Executive Office, was pleased with the vote.

"I was very happy to hear the vote today and really look at the support that we can provide moving forward," said the 34-year-old gay man outside of the supervisors' chambers after the meeting.

He said he is ready to put the seven offices under his purview to work to assist the newly forming Hate Crimes Task Force.

"We are seeing more division among our communities and we really want to ensure that we can build upon protecting our community," he said.

"Our job now as a county is to come up with recommendations and strategies that we can bring to the board," he added.

Gonzales told the B.A.R. that the police know "these crimes are underreported," not just for the LGBT community, but other vulnerable communities.

"We are hearing stories and anecdotes of [these issues happening in the LGBT and trans community specifically], yet we know these people aren't actually coming to the police," said Gonzales. "We are not seeing those in our reporting numbers."

"I have been a victim of a hate crime as well, not recently, but back then when it happened in downtown San Jose, I didn't report it because I didn't want to put myself out there to be a victim," he said.

"No one ever wants to be a victim," he continued.

It's an issue that the city's police department is actively working on improving through its LGBT advisory committee and community listening sessions. The San Jose Police Department had a strong presence at last month's Silicon Valley Pride and launched a Safe Place program (www.ebar.com/news/news//281016). These actions will make it easier for people to find safety and report when they are being attacked, officials said.

"We are going to try to get out there to understand why that is and try to make people feel more comfortable in doing so," Gonzalez said.

SJPD's Gonzales hopes that the Safe Place program will continue to spread throughout San Jose.

"That will be a big help in addressing underreporting of all hate crimes," he said.

Gonzalez said that officials need to figure out a way to empower people, erase societal stigmas around being victims of a crime, create victim allies for support, and "ensure that people are protected" when they do report a hate crime.